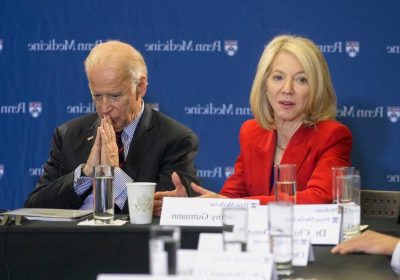 US, Russian ambassadors to return to their posts: Putin

President Biden’s nominee to be the next ambassador to Germany is an Ivy League president whose university paid him nearly $1 million for an honorary professor gig where he was seldom seen, it was revealed Friday.

University of Pennsylvania President Amy Gutmann, who has headed the Philadelphia-based institution since 2004, is the first envoy to a G-7 nation to be nominated by Biden.

If confirmed by the Senate, the 71-year-old Gutmann would be the second woman to serve as America’s chief diplomat in Berlin. (Robin Quinville has served as acting US ambassador to Germany since June of last year.)

Biden accepted an honorary professorship at UPenn after he left office as vice president in 2017. He held the post until April 2019, when he launched his successful presidential campaign.

In July 2019, The Philadelphia Inquirer reported that Biden was paid $911,643 by Penn. The student newspaper, the Daily Pennsylvanian, counted just nine on-campus appearances by the then-former senator and vice president between February 2017 and February 2019. Five of those events featured cameos by Gutmann.

The crowning achievement of Biden’s association with the university was the opening in February 2018 of the Penn Biden Center for Diplomacy and Global Engagement, an event overseen by Gutmann.

Gutmann was one of three ambassadorial nominations announced by the White House Friday. Biden has also tapped career diplomat Jeffrey Hovenier to be the US envoy to Kosovo, while another longtime State Department official, Virginia Palmer, has been nominated to be ambassador to Ghana.

Friday’s announcement brings the total number of national ambassadors nominated by Biden to 21, according to the American Foreign Service Association. Nine other Biden selections as envoys to international bodies, like the United Nations and NATO, have either been formally nominated or confirmed.