Senior doctors charged with responding to Victoria’s deadly nursing home clusters have warned there is no clear plan to counter another wave of coronavirus in aged care, risking a repeat of the crisis that left 646 residents dead and others without food or water. 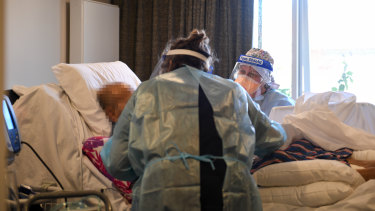 Geriatrician Dr Liz Dapiran and clinical nurse consultant Deanne Lascelles (facing the camera) tend to a patient in a nursing home during the height of an outbreak.Credit:Penny Stephens

Associate Professor Michael Murray was the geriatrician lead of the Victorian Aged Care Response Centre, which brings together federal and state agencies tackling the COVID-19 crisis, and is one of a number of medical leaders concerned that the sector remains unprepared for a large outbreak.

“We are working hard, we are planning, but we are going to need some lead time, because if we get another outbreak in short order, we are in big trouble,” he said.

He said state and federal governments had not been prepared for the rate of community transmission of coronavirus that occurred in Victoria, resulting in a “terrible crisis” that meant some residents had to be transferred to hospital even if they didn’t have coronavirus, as it was the only way to provide them care.

“We thought after the first wave we were pretty smart and had this all wrapped up … but of course nobody predicted we’d suddenly be leaking like a sieve.”

During the second wave, four new metropolitan hospital hubs were set up in Melbourne to help manage aged care clusters, with the Victorian Aged Care Response Centre established by the federal government acting as a coordination point.

However, Dr Claire White, the leading geriatrician at Western Health where one of the new hubs is based, said the hubs were yet to receive any funding, with hospitals instead expected to draw on their existing workforce, which will be stretched as more surgery resumes. 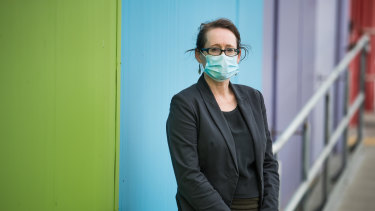 Dr Claire White is concerned the aged care hubs are yet to be properly funded.Credit:Jason South

While she said the hub model had been declared live by the aged care response centre, it was “very much a concept more than a plan”.

“You might be lucky if you get an outbreak that’s declared at 10 o’clock on the Monday,” Dr White said.

“But get three or four outbreaks occurring in quick succession after hours … the danger is that things would be poorly coordinated.”

At the height of Victoria’s second wave, Western Health was assisting in outbreaks at 28 facilities, and Dr White said it was common to find that residents hadn’t been given food or water, as most of the staff and management were in quarantine.

On one occasion, a desperate facility manager reported that about 20 residents with coronavirus had been gathered in one area, but only a cleaner had turned up to work in that area, with other staff declining to come in.

Dozens of Victorian aged care homes hosted multiple deaths after the first case was reported early in July, with 45 residents from St Basil's Homes for the Aged and 38 from Epping Gardens Aged Care losing their lives.

In recent weeks, most of Victoria's aged care outbreaks have been contained.

Professor Murray – who has recently moved back to the Austin Hospital, where he is director of geriatric medicine and involved in setting up the new northern hub – said while progress was being made developing new software and policies, it remained unclear what was expected of the hubs, and how they might be adequately staffed.

He warned that chronic shortages of skilled staff, which led to just a handful of people overseeing facilities at night during the worst of the crisis, had no easy fix, and has suggested hospitals pool staff to create fly-in squads of nurses and doctors that could be called to assist in outbreaks.

A Victorian government spokeswoman said there were also ongoing negotiations between the governments about how to fund recent recommendations from the Royal Commission into Aged Care Quality and Safety, including to have at least one trained infection control officer at each aged care facility.

Federal Aged Care Minister Richard Colbeck said every aged care facility was aligned with one of the nine metropolitan or regional hubs and it was expected the hubs would be able to “provide an immediate, coordinated and intensive response to an outbreak of COVID-19 within the facility”.

"Initially the hubs were focused on the coordination of the response within individual [facilities] but this has moved to a preventative and supportive role as the number of active outbreaks has fallen," he said.

Australian Medical Association Victorian president Julian Rait said he was concerned there was no plan to resource the aged care hubs.

“In the current situation, if there is escalating community transmission it’s almost inevitable it’s going to go back into aged care facilities,” he said.

“It appears little has changed.”

Nurse Mark Murray, who is clinical lead for Western Health’s aged care liaison service, said during the worst of the crisis in July and August he encountered death on a scale he’d never seen in his career as well as numerous instances of neglect. 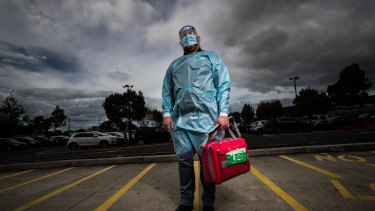 He said while it wasn’t purposeful neglect, there were cases where residents were provided water bottles but were unable to drink from them or even understand what the water bottle was for.

“There are a large number of facilities where residents did lose weight, a large amount of weight,” he said.

Mr Murray said there was no doubt that people died due to the secondary effects of the coronavirus outbreaks and he dreaded the prospect of another wave which he feared was likely without a vaccine.

Our weekly newsletter will deliver expert analysis of the race to the White House from our US correspondent Matthew Knott. Sign up for The Sydney Morning Herald‘s newsletter here, The Age‘s here, Brisbane Times‘ here and WAtoday‘s here.