Home » Bill de Blasio’s NYC is a dark blast from the past: Devine

Bill de Blasio’s NYC is a dark blast from the past: Devine 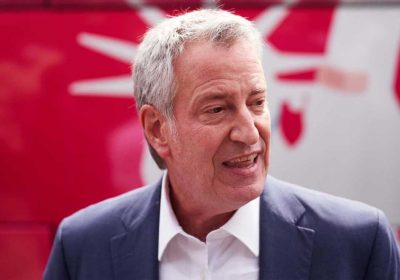 This snapshot of Midtown over the weekend evokes a sinking feeling of déjà vu for anyone who lived in New York in the 1980s.

But the city’s downhill trajectory was familiar even before the pandemic that lame duck Mayor de Blasio likes to blame for the surge in violent crime.

The lockdown only turbo-charged the disintegration of what de Blasio still likes to boast is “the safest big city in America.”

It’s not safe any more, and that’s largely thanks to the mayor and the rest of the “defund the police” idiots in his party.

On my phone is an app called Citizen, which sends notifications every time a crime is committed in your neighborhood. I’ve had to turn it off.

When you live in New York these days, you don’t need an app to warn you about menace every five minutes.

It’s all around you. You have to be careful how you walk, dodging the brown stuff, looking straight ahead, not sideways, at the man with his pants around his ankles, not invading the privacy of people passed out on the footpath, but still with situational awareness at high alert.

Don’t take the short cut through the Marriott parking lot, just in case. Don’t get caught in the narrow chute under scaffolding on Broadway where you have nowhere to escape if an unfriendly comes your way.

Tour buses had started to make a comeback in recent weeks, but are the tourists Broadway needs really going to brave the bullets of Times Square?

Saturday’s triple-shooting in broad daylight was shocking. Three innocent tourists — including a 4-year-old girl — were struck by stray bullets when a dispute broke out between four men, reportedly involving an illegal CD vendor.

Just four weeks ago, another tourist from Kansas City was shot in the shoulder by a stray bullet nearby.

All is not well in the Big Apple. But at least we’re wearing our masks.

On the subway, lunatics are pushing people onto the tracks, and muggers are sucker-punching women for their bags.

A subway conductor was stabbed in the face on a J train in Brooklyn. It’s frightening.

Yet de Blasio’s answer is to sneer at our fear. If you were a “real New Yorker” you wouldn’t be afraid, he said last week.

“As a real New Yorker who lives in the city and has taken the subway all my life, I wouldn’t hesitate at all to take the subway.”

Last time I looked, de Blasio grew up in Cambridge, Mass., back when he used his real name Warren Wilhelm Jr., so he’s not in a strong position to decide who qualifies as a “real” or fake.

The good news is that de Blasio’s term ends this year.

Now we have a chance to elect a proper mayor — but that means voting.

Guess why de Blasio is in Gracie Mansion? Because 84 percent of New Yorkers couldn’t be bothered voting. Just 726,361 people in New York City made a very bad choice in 2017.

Astonishingly, with the stakes higher, this election doesn’t seem to have captured the attention of voters either.

A poll by NY1 and Ipsos last month found only 33 percent of registered voters were certain they would vote in the mayoral primary next month.

Obviously, it will be a Democrat, but the least worst option is Eric Adams, whom The Post has endorsed.

In fact, as a former NYPD police captain, he is perfectly suited for the times.

He has positioned himself as the law-and-order candidate whose priority is to make the city safe again. As a black man who has championed the cause of police reform for decades, he also has credibility with Black Lives Matter activists and the authority to stand up to their excesses. He knows how government works in this city, in his role as Brooklyn borough president, and he has mastered the dark arts of machine politics.

But his primary attraction is that he is the only mayoral candidate confident enough to push back on the anti-cop movement.

“Nothing angered me more and concerned me more than when we allowed people to pour water on police officers [last summer],” he said last week.

He understands that “public safety is the prerequisite to prosperity in this city”, and he has a plan to get guns off the street.

“Am I the only candidate that’s running for mayor that understands that we can’t go back to violence and we can’t act like this is not happening in front of us,” he said.

Hallelujah. Adams’ law-and-order stance has propelled him to the front of the pack of mayoral hopefuls.

The deadline for voter registration is May 28. Primary Day is June 22.

Do your civic duty. Vote like your life depends on it, because it probably does.

Hard to believe, but the man who really runs the White House, President Biden’s chief-of-staff, Ron Klain, has been tweeting triumphantly in recent days about the parlous situation at the southern border.

One post boasted of a “dramatic reduction” in overcrowding for unaccompanied children at Border Patrol migrant facilities since the end of March.

Great, but that’s only because the administration has become more efficient at facilitating the cartels’ people-smuggling business.

This also was a cause for boasting last week by White House Deputy Communications Director Pili Tobar.

“We had a plan from the beginning,” she tweeted. “Move kids as fast as possible out of [Customs and Border Protection] and to the arms of vetted sponsors or family members. That plan is working.”

So the “plan from the beginning” was to invite floods of illegal immigrants to cross the border into America and wave them through as fast as possible to make room for more. That’s called letting the cat out of the bag.