Sign of trouble: Bizarre moment mindless vandal picks fight with a business sign before tearing it off a wall in strange 30-second rampage

This is the bizarre moment an inebriated man picked a fight with a business sign in Kent on Tuesday before tearing it off the wall in a strange 30-second rampage.

CCTV footage shows the young man repeatedly kick and punch the board outside a building company’s offices in a bizarre bout lasting around 30 seconds.

The company Ducron Construction Ltd has decided to share the mind boggling mischief in a bid to shame the wannabe boxer.

In the clip, the man squared up to the sign and exacted a series of one-two combinations on it as he bobbed his head from side to side.

After a high left-legged kick, the lone street fighter unleashed a furious eight punch flurry before bobbing and weaving once again.

As he kicked for the second time, the unlikely contender caught him off balance and sent him stumbling backwards. 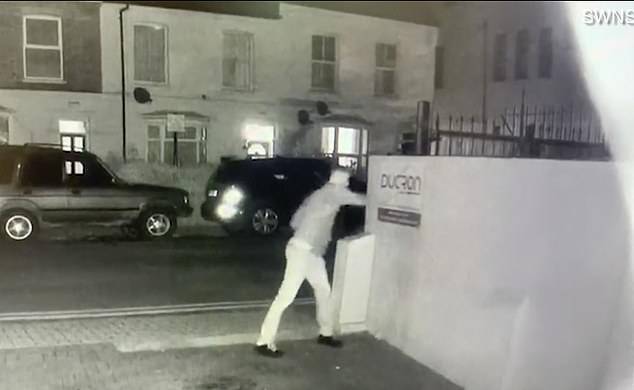 The inebriated man can be seen landing a right cross on the sign outside Ducron Construction Ltd in Herne Bay, Kent on Tuesday. As he hit the sign, he ensured he followed boxing technique by bobbing his head from side to side 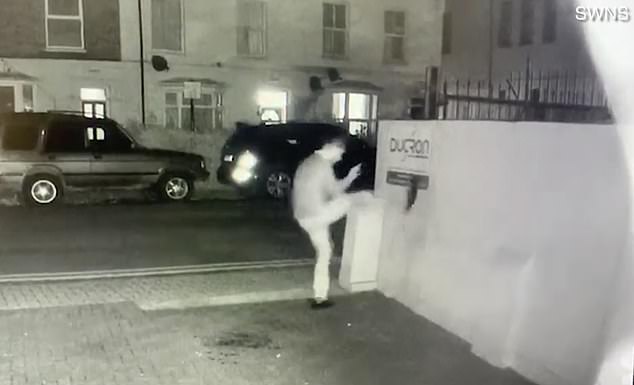 After the flurry of punches the man hit the sign in Kent with two high kicks. On the second kick (pictured) the unlikely contender caught him off balance and sent him stumbling backwards

Apparently shaken, the fighter seemed set to call it a draw. But seconds later he yanked the sign clean off the wall with both hands before calmly wandering off.

The footage was captured between 10pm and midnight on Tuesday outside the main office of the Ducron Construction Ltd in, Herne Bay, Kent.

While the firm has not reported the vandalism to the police, it hopes the video will shame the misdirected ‘boxer’.

An employee said: ‘He’s just a strange person who walked down the road, saw the sign, did a bit of boxing and then ripped the sign off the wall.

‘Who punches a wall? He was doing all of his fancy moves and high kicks.

‘It was a ridiculous thing to do. He’s probably woken up with swollen hands and may not even remember what he did.’ 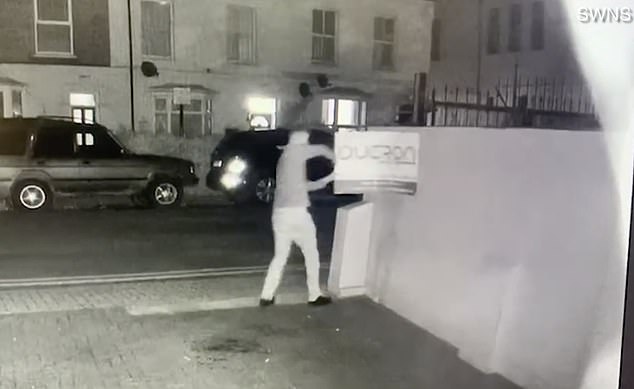 Apparently enraged, the mindless vandal tore the sign off the wall in Herne Bay, Kent on Tuesday

She also stressed that the man is unknown to staff at the building firm, which provides services for commercial sites in London.

The employee said nothing like this has ever happened to the firm before.

‘It was completely out of the blue. We have no history with this person.

‘We’ve released the video to shame him and so that people could see him for the fool that he is.’

Company bosses expect to have to fork out as much as £100 to replace the damaged sign.