‘Bloodthirsty’ thug who bit female officer is released from jail A police federation chief today slammed the justice system after a ‘bloodthirsty’ thug who bit a female officer like a ‘wild animal’ was released from prison after serving just a quarter of his jail term.

‘Savage’ Brett Ferre attacked PC Danielle Ruzewicz as she tried to help him in Portchester, Hampshire – leaving her with a 6cm gash on her left arm after sinking his teeth into her.

PC Ruzewicz and her colleague PC Nikki Wisdom rushed to the father-of-five’s aid after receiving reports he had suffered head injuries.

But when PC Ruzewicz tried to help, he lunged at her and left her with blood ‘pouring’ from the gruesome gash on her arm. 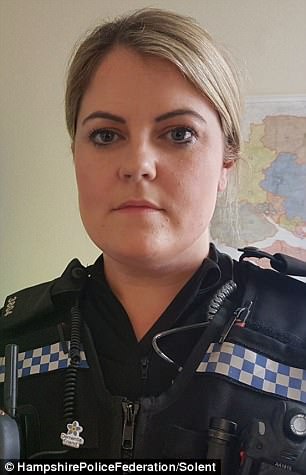 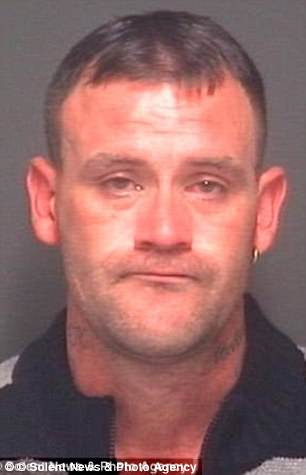 ‘Savage’ Brett Ferre (right) attacked PC Danielle Ruzewicz (left) as she tried to help him in Portchester, Hampshire – leaving her with a 6cm gash on her left arm after sinking his teeth into her 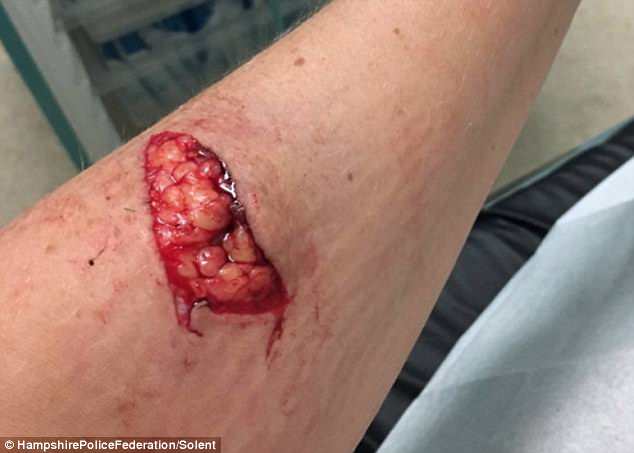 When PC Ruzewicz tried to help, he lunged at her and left her with blood ‘pouring’ from the gruesome gash on her arm (pictured)

Ferre, 35, admitted one count of causing grievous bodily harm at Portsmouth Crown Court, Hampshire, and was sentenced to two years and four months in prison.

But Hampshire Police Federation chairman John Apter has revealed Ferre has been released from prison after serving a mere seven months.

Mr Apter, who said at the time it was the ‘worst bite injury’ he had ever seen, said PC Ruzewicz was left to find out her attacker had been released in a pre-shift briefing.

Mr Apter said: ‘Here you have an officer who was so badly bitten by this animal that she is scarred for life.

‘For such a violent offender to serve such a short part of his sentence is not justice.

‘The original sentence was not enough for the injuries sustained – but for Ferre to serve just seven months is a disgrace and in no way takes account of the victim’s feelings.

‘To add insult to injury, for Danielle to find out about Ferre’s release at a shift briefing is a kick in the teeth and should never have happened.

‘I have raised this formally with the chief constable, who has ordered an internal review and is looking at the circumstances of Ferre’s release.

‘I have also raised my concerns directly with the victims commissioner, Baroness Newlove.

‘The criminal justice service should hold its head in shame and they owe an apology and an explanation as to why this has happened.’

PC Ruzewicz, 36, underwent months of testing after the vicious attack by Ferre on September 16, last year.

Speaking about Ferre’s release, she said: ‘I am deeply upset at learning of Brett Ferre’s early release and the way I found out was not how a victim should be treated. That’s not how I would treat victims that I look after.’

In a statement read out at Portsmouth Crown Court during Ferre’s sentencing, the officer said there was ‘no excuse’ for the attack. 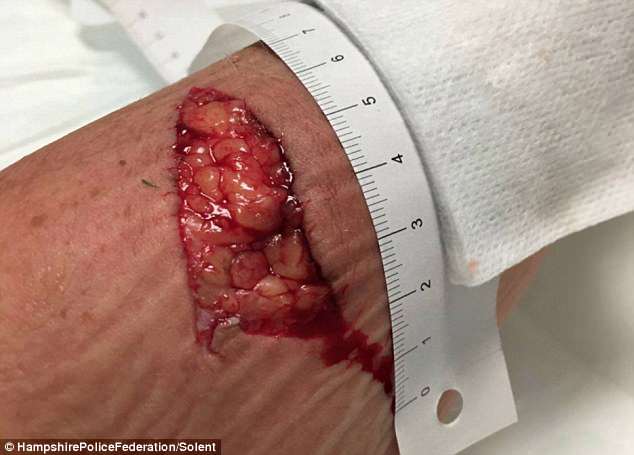 She said: ‘Regardless of how drunk you are it’s not an excuse for savage, bloodthirsty behaviour resulting in someone being permanently scarred.

‘We tried to then restrain him, and as I went to grab his left arm, he trapped my hand under his head, turned his head and he bit down on my arm.

‘Straight away I could see lots of blood pouring out of him. It wasn’t really until I got to hospital and they took the bandage off that I realised quite how bad it was. I ended up with a 6x3cm tear on my arm.

‘I was just saying “I’m fine”, however I clearly wasn’t fine, I had just been bitten, I felt disgusting, dirty, and violated.

‘These things have quite an impact on you – my children were affected and I started questioning, “Is this a job I really want to do, if this is the risk I’m exposed to?'”

Sentencing him, Judge Peter Ralls said in September last year: ‘She was trying to assist you in what was a careful, cautious and utterly professional way, trying to stop you from further injuring yourself or anyone who was present.

‘Whilst she was legitimately trying some limited restraint you bit her arm in a way mimicking a wild animal. The damage caused was very significant indeed.’

He added: ‘This was an attack against somebody providing a service to the public, indeed someone who was trying to help you specifically and you rewarded her in this way.’