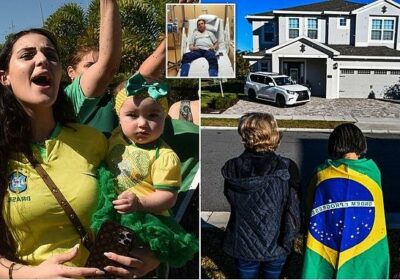 Supporters of Jair Bolsonaro are clamoring to see the self-exiled former Brazilian president outside his Florida refuge this week, where he is recovering after being hospitalized with severe stomach pain.

Bolsonaro, a close ally of former US president Donald Trump, flew to Florida rather than attend the January 1 inauguration of his successor Luiz Ignacio Lula da Silva after having made allegations about the integrity of October elections.

He was rushed to hospital on January 9, just one day after thousands of his loyal followers swarmed Brasilia, vandalizing the presidential palace and other institutions – which Democrats compared to the January 6, 2021 attack on the US Capitol – but was ultimately discharged on Tuesday.

Brazilians living across the US have since travelled to the sleepy Florida suburb of Kissimmee, lining up on the grass outside their idol’s rental home and chanting slogans of support while openly praying for his recovery.

Some families even forwent planned trips to nearby Disney World, choosing instead to queue up opposite Bolsonaro’s bolthole in the hopes of getting the slightest glimpse of him.

It comes as dozens of Democratic lawmakers yesterday called on President Joe Biden to revoke Bolsonaro’s visa, arguing the United States should not offer refuge to anyone involved in riots against Brazil’s newly elected government. 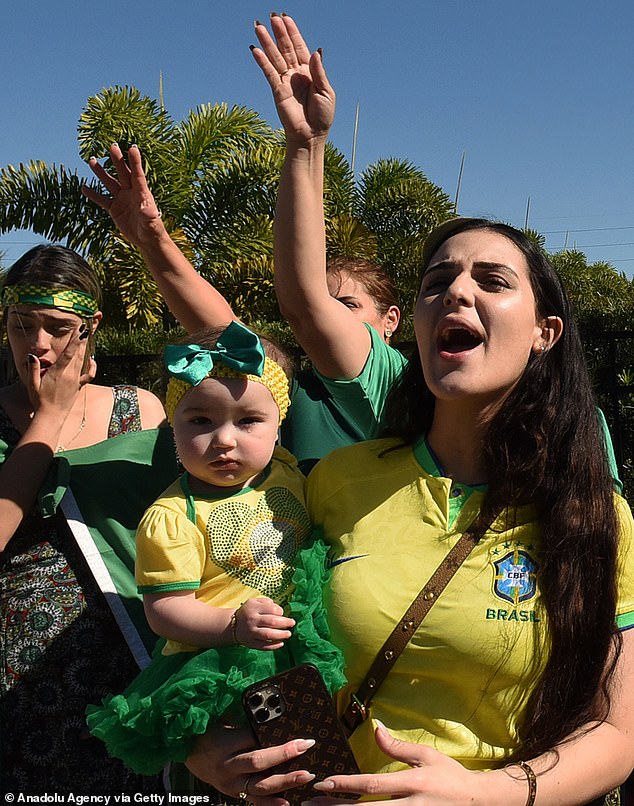 Liliana Martins Monteiro holds her 9-month-old daughter, Louise, as she and other supporters of former Brazilian far-right President Jair Bolsonaro chant slogans, pleading for him to emerge from the home he is staying in at Encore resort at Reunion on January 12, 2023 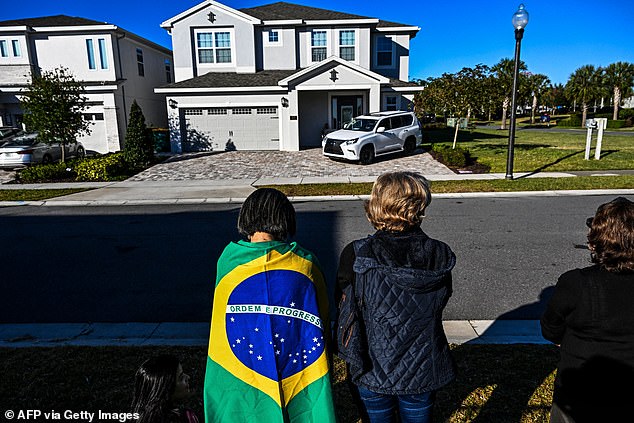 Supporters of former Brazilian President Jair Bolsonaro, pray for his health outside his rental house at the Encore Resort at Reunion in Kissimmee, Florida, on January 12, 2023 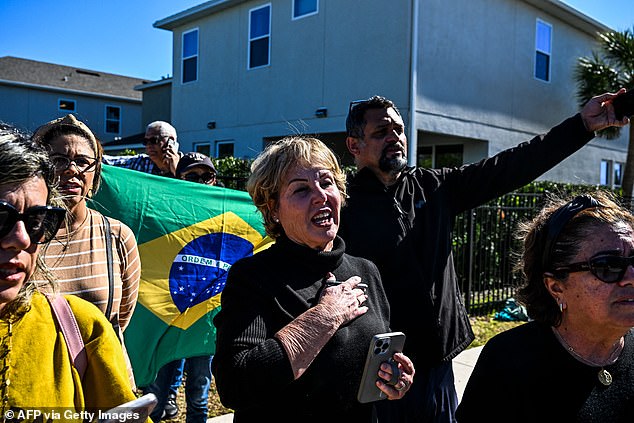 Nearly one in five Brazilians said they approve of Sunday’s capital rampage carried out by backers of ex-president Jair Bolsonaro, according to results of a poll released Wednesday by Atlas Intelligence 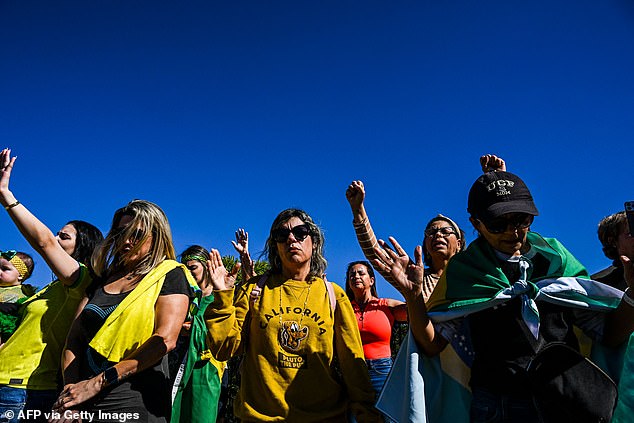 Isabella, 28, and her husband were among the crowd planning to take their kids to Disney World this week but made a quick change of plans.

On vacation from their home in Washington DC, the family has spent hours outside Bolsonaro’s simple, two-storey unit, and Isabella claims even her five-year-old was willing to pass on the allure of Disney’s Magic Kingdom in favour of the right-wing politician.

‘Even at five they know right from wrong,’ she told The Telegraph, contrasting Mr Bolsonaro with Lula, the leftist leader who staged a remarkable comeback from a jail term on corruption charges.

‘We had to make an effort to come and they [the kids] wanted to see Bolsonaro,’ she said. ‘It’s a once-in-a-lifetime experience and we absolutely love and adore him.’

Supporters were seen chanting their hero’s name, while other placed their hands on their chests and recited prayers aloud, hoping for his speedy recovery. 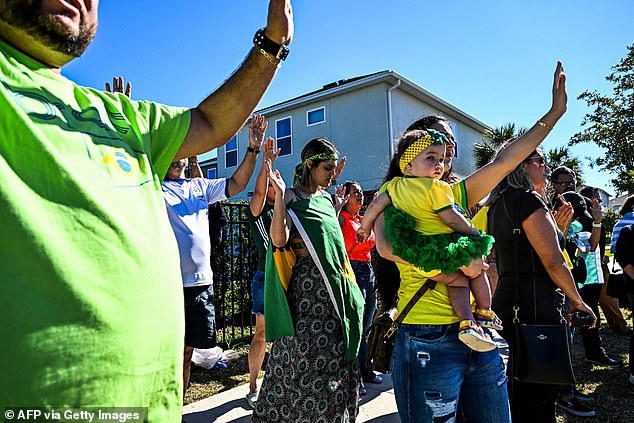 Supporters of former Brazilian President Jair Bolsonaro, pray for his health outside his rental house at the Encore Resort at Reunion in Kissimmee, Florida 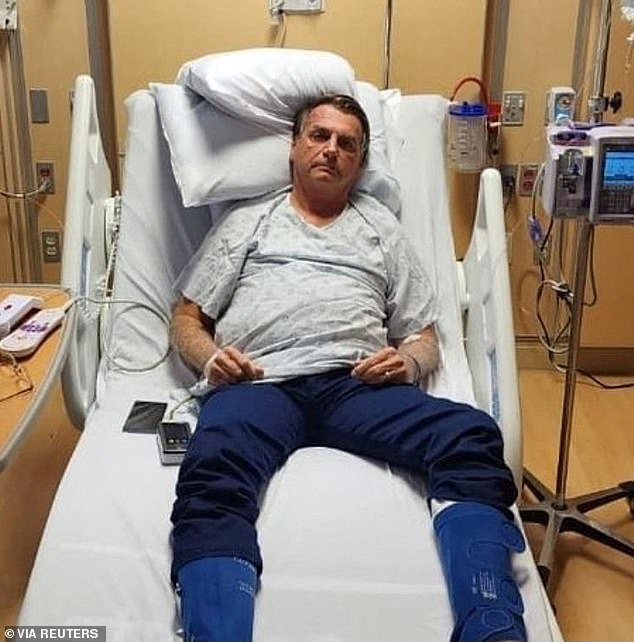 Brazil’s former President Jair Bolsonaro is pictured on a hospital bed at an unspecified location in this picture released January 9, 2023 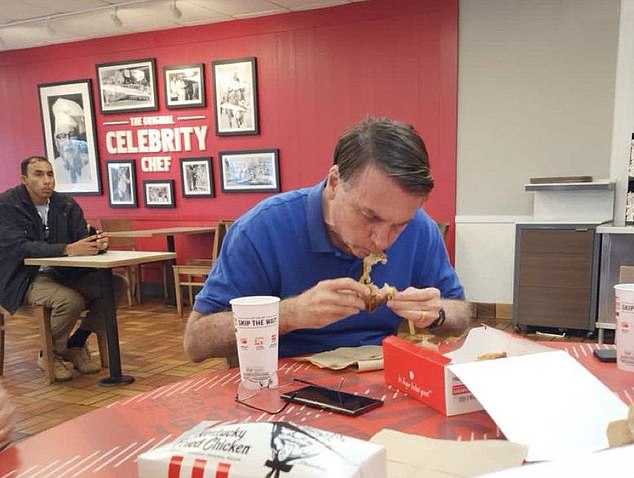 Meanwhile, 41 Democratic members of the US House of Representatives on Thursday asked the Biden administration to revoke any US visas held by the former president and expel him from the country.

‘We must not allow Mr Bolsonaro or any other former Brazilian officials to take refuge in the United States to escape justice for any crimes they may have committed when in office,’ it said.

They called on the Biden administration to assess whether Bolsonaro’s US visit remains legal, as he may have flown to the United States on a visa for official visitors even though he is no longer president.

US Secretary of State Antony Blinken, asked at a news conference Wednesday about Bolsonaro’s presence, said the United States has not received any requests from Brazil but would respond ‘expeditiously’ if it does.

‘With regard to individuals, we’re talking now about people who are private citizens,’ Blinken said.

‘It’s not appropriate for us to comment on any individual’s visa status.’

But he said that Biden would work closely with Lula, who is set to visit Washington next month.

‘We stand with Brazil’s democracy and its institutions,’ Blinken said. 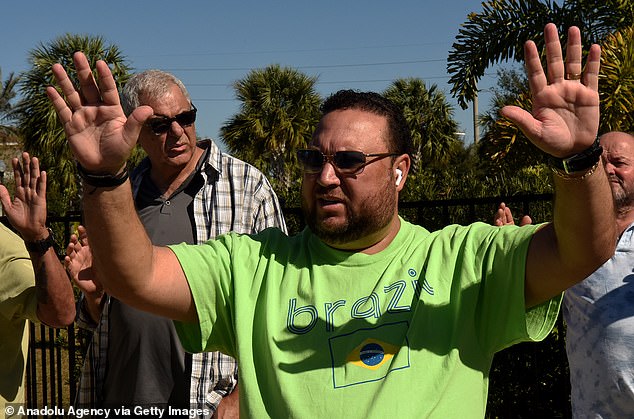 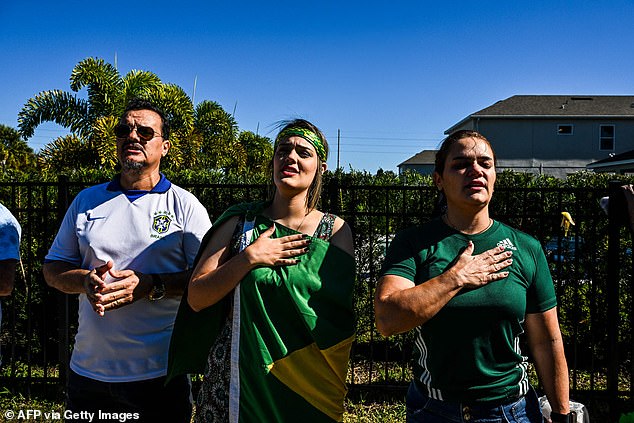 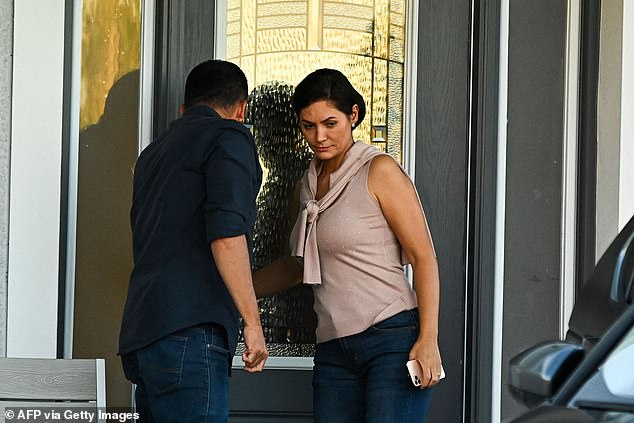 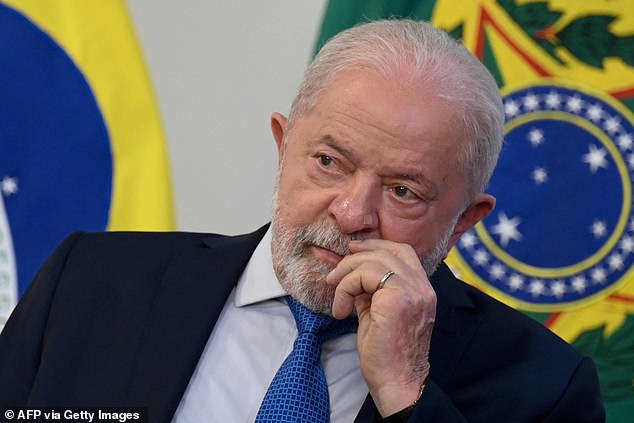 Brazil’s President Luiz Inacio Lula da Silva gestures during a meeting with parliamentarians at Planalto Palace in Brasilia on January 11, 2023 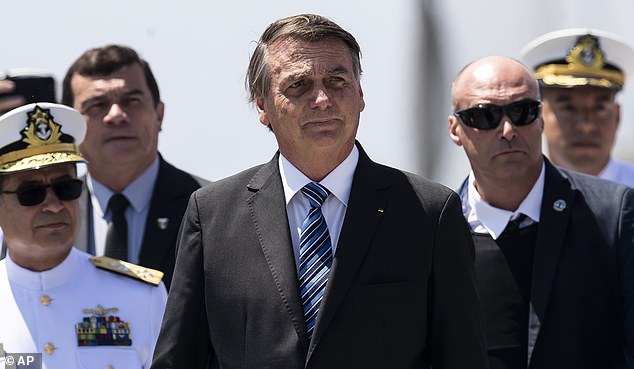 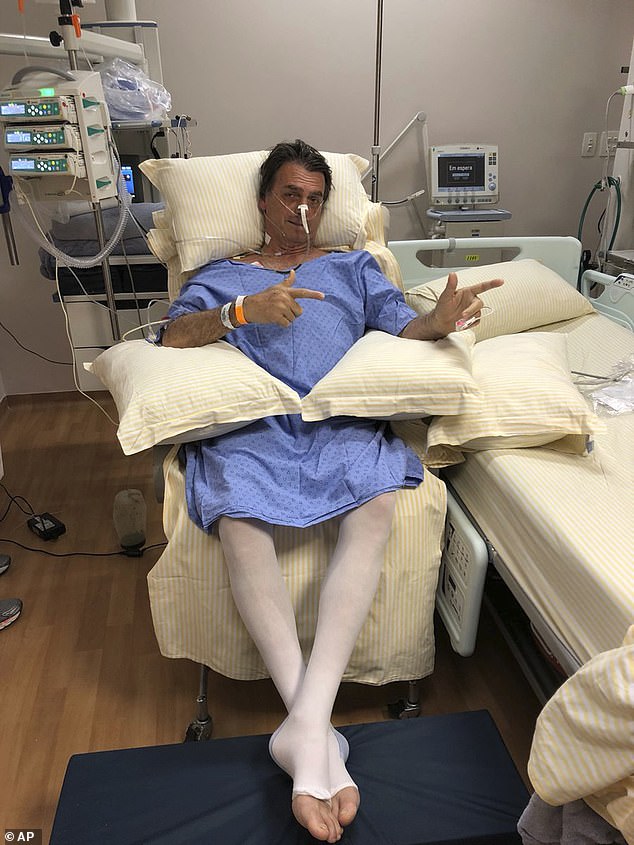 Bolsonaro poses for a photo while sitting in his hospital room at the Albert Einstein Hospital, in Sao Paulo, Brazil, Saturday, August 8, 2018. He was stabbed in the abdomen during his presidential campaign

Bolsonaro, in an interview with CNN Brasil, said he had planned to return to his native country by the end of January but will move up his plans for health reasons after being hospitalized earlier this week.

The former president, who seemingly has ongoing issues with his abdomen, was previously admitted to hospital in Sao Paulo, Brazil, in early January 2022 because of a blockage found in his intestines.

He posted an image of himself lying in bed with his thumbs up after being admitted into a ward, telling followers he may have ‘surgery for an internal blockage in the abdominal region.’

Bolsonaro, 67, was stabbed in the abdomen during his successful 2018 presidential campaign and has undergone at least four surgeries since.

He lost nearly 40 percent of his blood during the attack four years ago. It’s unclear if his latest ailments in Florida are linked to the stabbing. 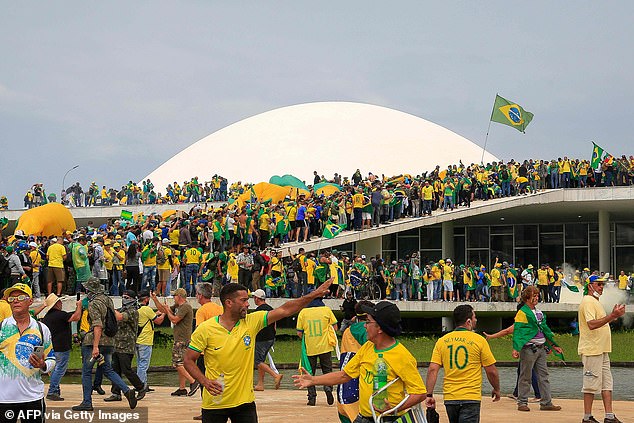 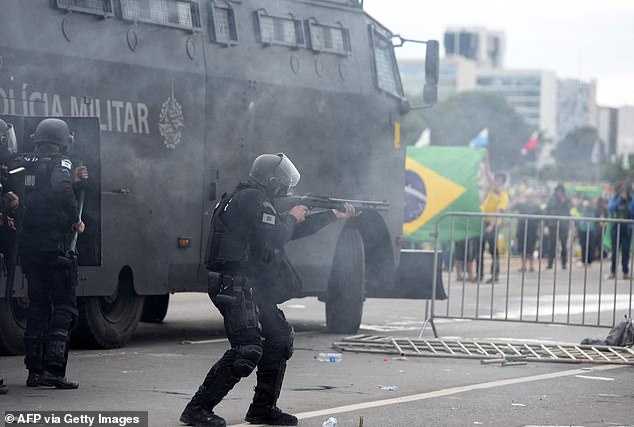 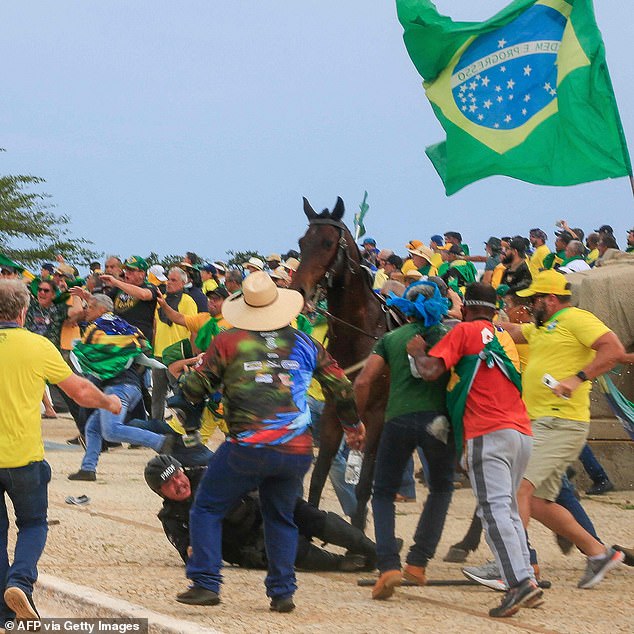 A Military Police officer falls from his horse during clashes with supporters of Brazilian former President Jair Bolsonaro after an invasion to Planalto Presidential Palace in Brasilia on January 8, 2023

Thousands of Brazilians who support Bolsonaro invaded the Supreme Court, presidential palace and Congress on January 8 in an episode that closely resembled the U.S. Capitol insurrection in 2021.

The groups were able to break through police barricades along the capital Brasilia’s main boulevard and storm the buildings, damage furniture, smash windows and destroy artworks.

As they unleashed chaos in the capital, Bolsonaro was holed up in Florida, having left Brazil on New Year’s Day just two days before his successor Lula took office.

Restoring order in the Brazilian capital, Brazilian soldiers backed by police on Monday this week dismantled a two-month-old camp opposite the army’s headquarters where Bolsonaro supporters had been protesting since his election defeat.

Some 1,200 people from the camp were detained for questioning on Monday, authorities said, after about 300 arrests were made on Sunday, the day of the riots.

Lula, who was back at work at the ransacked Planalto palace, met with his defense minister and commanders of the armed forces to discuss the violence.

Speaking later to the country’s governors, Lula stepped up his criticism of the Brazilian military for tolerating demonstrations at their gates calling for a coup since Bolsonaro lost the election.

‘People were openly calling for a coup outside the barracks, and nothing was done. No general lifted a finger to tell them they could not do that,’ the 77-year-old president said.

He accused some security forces of being complicit with rioters.