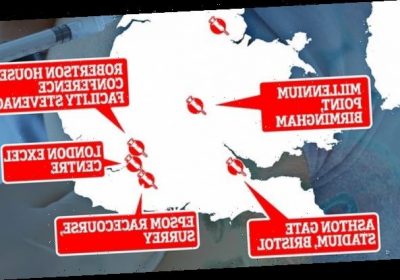 Boris Johnson has revealed seven mass coronavirus vaccination centres will throw open their doors next week to turbo-charge efforts to pull the country out of a seemingly endless cycle of lockdowns and ruinous curbs on daily life.

The hubs will be based in venues including sports centres and London’s ExCeL convention centre, and equipped to administer thousands every week.

There will be one in every region of England, except Yorkshire and the East Midlands, to be operated by NHS staff and volunteers.

Stunning pictures showed the capital’s Nightingale hospital in the ExCeL centre had been stripped bare while its corridors stood empty last week as the capital’s hospitals were bursting at the seams with patients.

MailOnline also revealed last week the emergency facility will be cut to 300 beds, a mere fraction of the 4,000 it had when it first opened.

The Government is aiming to vaccinate 13.2million care home residents, frontline health workers and ‘vulnerable’ Britons by mid-February, in a desperate bid to drive down fatalities from the virus.

But experts have warned they will need to ramp up the roll out in order to hit the ambitious target.

Pharmacists have today called for them to also be used to dish out the Covid-19 vaccine, and called on the NHS to use its ‘invisible army’.

It comes as daily deaths from the virus went above 1,000 for the first time since April, and health chiefs report another record-high 62,322 new infections. 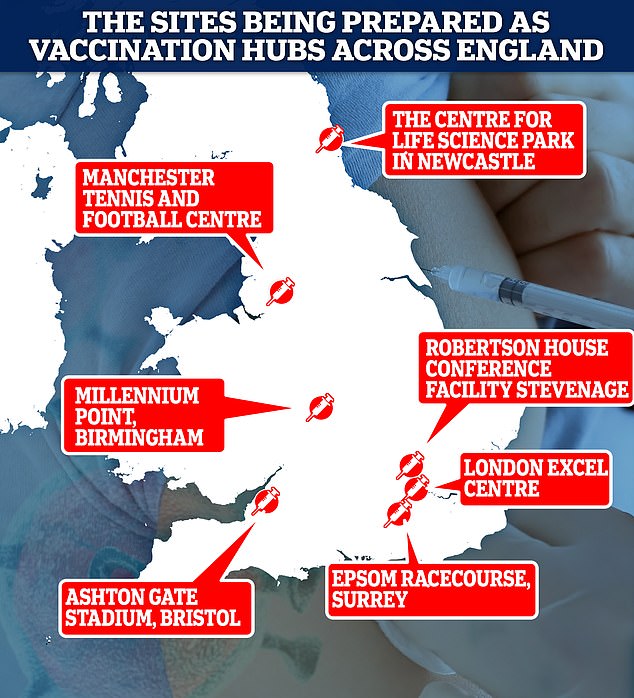 Above are the locations of the seven mass vaccination centres that will begin operating from next week. They were revealed today by the Prime Minister 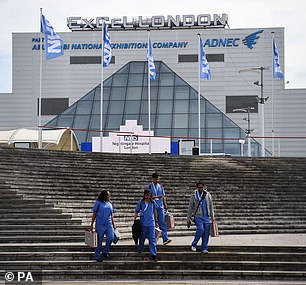 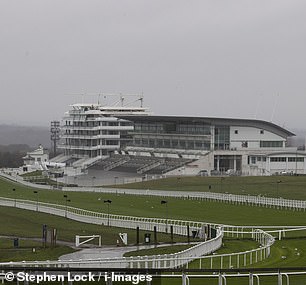 London’s ExCeL Centre, left, and Epsom racecourse in Surrey, right, will both be used as mass vaccination centres, the Prime Minister has said 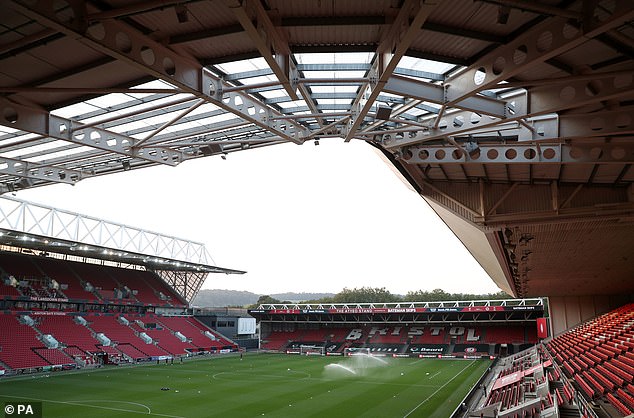 The Ashton Gate Stadium, Bristol, will also be used to administer the Covid-19 vaccine

WHERE WILL HOST THE SEVEN MASS VACCINATION CENTRES?

The Prime Minister’s official spokesman announced the mass vaccination centres had been set up in the country.

The Etihad Tennis Centre, Manchester, and Epsom Racecourse, Surrey, are both to be used for giving out vaccines, alongside Robertson House, Stevenage, the Centre for Life, Newcastle, the Ashton Gate Stadium, Bristol, and Birmingham’s Millenium Point.

The Press Association news agency reported five other locations are also being considered as vaccine hubs.

It comes after supermarket chain Morrisons confirmed that car parks at three stores in Yeovil, Wakefiled and Winsford would host drive-through vaccinations from Monday, with a further 47 offered to the Government.

Premier League club Tottenham Hotspur have also offered the use of their stadium to the NHS as a venue to roll out the coronavirus vaccine.

Other venues in London have offered their services to support the rollout, such as the Royal Vauxhall Tavern and G-A-Y.

Jeremy Joseph, owner of G-A-Y, has offered up all of his venues for the vaccinations, including the club Heaven in Charing Cross, which has a capacity of 1,625.

The venue is licensed for 24 hours, so he said it could offer around-the-clock vaccinations.

James Lindsay, CEO of the Royal Vauxhall Tavern, told the PA news agency he wanted to play his part in the fight against the virus.

London’s Nightingale Centre is expected to start admitting recovering emergency care patients who have tested negative for coronavirus in the coming days, but will not have all its 300 beds available until next month.

A spokesman for NHS England did not deny they had significantly cut the number of beds, and said the number would be determined ‘by the demand and availability of staff’.

The seven Nightingales were left largely unused during the first wave despite £220million of taxpayers’ money being pumped into them, as hospitals struggled to spare the needed doctors and nurses to man their wards. Just 57 Covid-19 patients were admitted to London’s Nightingale, Department of Health figures show.

The NHS also admitted the emergency facility would be used for non-Covid patients, despite millions being poured into equipping it with ventilators during the first wave for those suffering the worst effects of the virus.

‘It will provide rehabilitation for people who are recovering after an emergency hospital stay and who are not Covid positive, freeing up other beds in hospital for Covid-19 patients,’ they said.

The Nightingale in the capital was built to much fan-fare during the first wave of the pandemic, with Health Secretary Matt Hancock heralding it a ‘remarkable feat in these challenging times’.

But it was left idling for months after barely a month in use, before the order to start stripping the hospital was given – as clearly shown by shocking photos from inside it last month revealing empty wards.

Frantic efforts were then launched to re-construct a ‘scaled-down’ version of the mothballed hospital, sources said, at further expense to the public purse.

LONDON’S NIGHTINGALE HOSPITAL WILL HAVE JUST 300 OF ITS 4,000 BEDS WHEN IT REOPENS 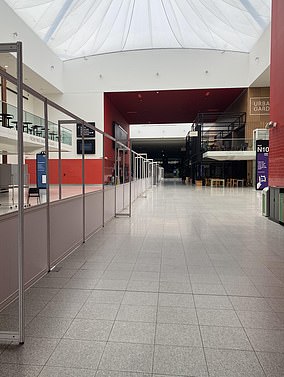 The hospitals corridors were also eerily silent, as pictured on December 29

London’s NHS Nightingale hospital will have just 300 beds for treating patients, a fraction of the 4,000 available in March, when it re-opens next week, MailOnline can reveal.

The flagship hospital at the ExCeL centre will start admitting recovering emergency care patients who have tested negative for coronavirus in the coming days, but it will not have all its beds available for patients until next month.

A spokesman for NHS England did not deny they had significantly cut the number of beds, and said the number would be determined ‘by the demand and availability of staff’.

The seven Nightingales were left largely unused during the first wave despite £220million of taxpayers’ money being pumped into them, as hospitals struggled to spare the needed doctors and nurses to man their wards. Just 57 Covid-19 patients were admitted to London’s Nightingale, Department of Health figures show.

NHS London Nightingale was hurriedly put up in less than two weeks in March, amid fears the capital’s hospitals could be overwhelmed by spiralling Covid-19 admissions.

It was opened to patients on April 3 by Prince Charles, and welcomed its first patient four days later.

Professor Richard Schilling, a consultant cardiologist, tweeted a photo to mark the event as the first team came on duty.

But within six weeks the hospital had been moved to ‘standby’ and ordered to close its doors.

Department of Health figures reveal only 57 patients were admitted to the emergency hospital, with the final patients being received on April 27.

By May 6, shortly before it was due to close, the Government dashboard shows only five patients remained at the facility.

The emergency facility has been left dormant for months, before hospital chiefs decided the extra capacity would again be needed in the new year.

Shocking photos showed that in this time the Nightingale – put up at huge expense to taxpayers – had been stripped of its beds and wards while it was officially mothballed.