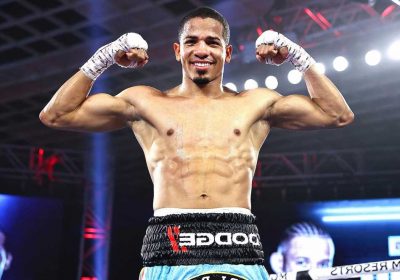 Boxer questioned about pregnant woman who was later found dead

US tourist killed in Puerto Rico after alleged drug buy

Boxer Félix Verdejo turned himself in to federal authorities in Puerto Rico on Sunday to face charges in the disappearance and death of his 27-year-old pregnant girlfriend, officials said.

Verdejo, 27, is accused of abducting Keishla Rodríguez and killing her by throwing her off of a bridge in San Juan at around 8:30 a.m. on Thursday, according to a criminal complaint filed by the FBI.

Authorities allege that Verdejo injected his lover with a syringe containing an unidentified substance — before binding her arms and feet with wire and tying a heavy block to her.

The fighter allegedly shot at Rodríguez’s body in the water as he stood on the bridge.

A witness who wasn’t identified in the complaint is said to have helped Verdejo kidnap and kill Rodríguez.

Her body was found in a lagoon in the US territory’s capital Saturday, a few days after she was reported missing.

She was identified earlier Sunday using dental records, according to Puerto Rico’s Institute of Forensic Science.

Verdejo — a lightweight contender who represented Puerto Rico at the 2012 Olympic games — was first brought in for questioning by local police on Friday as “a person of interest” in Rodríguez’s disappearance.

An FBI spokeswoman told the Associated Press that charges against Verdejo were being filed and would soon be announced.

Verdejo is married but had known Rodríguez since middle school and kept in touch with her, according to the woman’s family.

Keila Ortiz, the victim’s mother, has said that her daughter was pregnant with Verdejo’s child.

She said Verdejo had told her daughter not to have the baby, mentioning his career and family.

Rodríguez apparently called her mom before she vanished Thursday and said that Verdejo was going to her house to see the results of a pregnancy test.

“I told her, ‘Be careful,’ because he had already threatened her,″ Ortiz said.