Home » World News » Boy, 10, hit by deer in ‘stampede’ after herd was chased by dog in London Park

Boy, 10, hit by deer in ‘stampede’ after herd was chased by dog in London Park 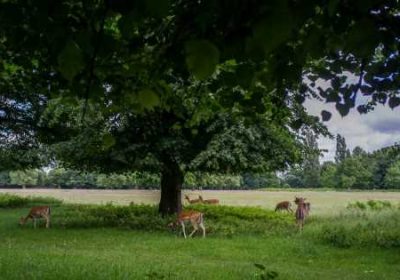 A 10-year-old boy was hit by a deer in Bushy Park during a 'stampede' after the animals were chased by a dog.

The deer began running in the park on Sunday, January 17, at around 2.50pm.

The boy was rushed to hospital with bruised ribs following the incident, reports MyLondon.

On Tuesday, (February 9), Finn Shiodan, 52, of Weybridge, was charged by the Met Police Royal Parks team in relation to an incident in Bushy Park, Richmond-upon-Thames.

Phil Edwards, Park Manager for Bushy Park told the Evening Standard: "We were very upset to learn that a 10-year-old boy suffered injuries after an out-of-control dog chased a herd of deer in Bushy Park causing a stampede."

Shiodan is due to appear at Wimbledon Magistrates' Court on February 23.

The Met Police team launched an investigation into the incident and a man was charged by postal charge requisition in February.

The full charge is "causing / permitting an animal / bird in charge of to chase / worry / injure another animal in a Royal Park, contrary to S4(21) Royal Parks & Other Open Spaces regulations 1997".

In a tweet, Royal Parks Police wrote: "We have charged a male from #Weybridge under the park regulations after his dog chased a herd of deer in #BushyPark on 17/01/21.

"The fleeing deer collided with a child who was taken to hospital. He will appear at Wimbledon Magistrates Court on 23/02/21."