Home » World News » Boy, 3, abandoned in cemetery with dog before Christmas reunited with his dad

Boy, 3, abandoned in cemetery with dog before Christmas reunited with his dad 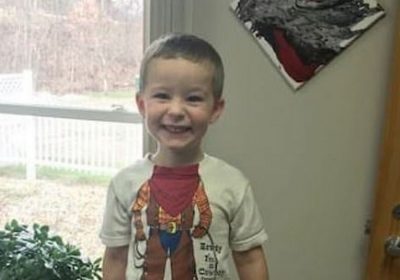 A little boy who was left in a freezing cold cemetery with his beloved dog two days before Christmas has been showered with gifts by generous locals.

The three-year-old tot was spotted running after a car as it sped away, leaving him alone in a snow-covered cemetery with no one but his pup for company.

A witness who saw the heartbreaking scene unfold at Hope Memorial Gardens in Ohio, US, quickly got in touch with police.

She said the infant had chased after a blue, medium sized car on December 23 as cops arrived and took him in.

The little lad gave his name as Tony, The Mirror reported, and he was placed into protective custody with his dog.

As he was only three, he knew his parents' first names but had no idea where they lived.

Detectives made a public appeal to find his family, and relatives spotted his image in the local media and contacted his dad.

Police said Tony was supposed to be in the care of his mum when he was abandoned in the freezing cold.

In a statement, Hinckley Police Department said: "While the investigation is still on going with a lot of questions still unanswered I want to assure everyone that Tony is doing very well in the loving home of a foster family here in Medina County.

"His dad has been very cooperative with us and Children Services in the investigation. I will release further information when I can."

The community came together and brought dozens of Christmas gifts for the little boy, who found himself living with a foster family over the festivities.

Hinckley Police Department's spokesman added: "I would like to thank everyone for their kindness in wanting to buy Christmas presents for Tony, take him in and adopt him.

"You all are amazing people and why we have such a great community here in Hinckley, all of Medina County and beyond."

After word spread that Tony had been left stranded before Christmas, generous locals inundated the police department with christmas presents for the little lad.

Chief David Centre took to Facebook on Christmas Eve to say: “From all of us at HPD we want to thank everyone for your kindness, thoughts, prayers and overwhelming love.”