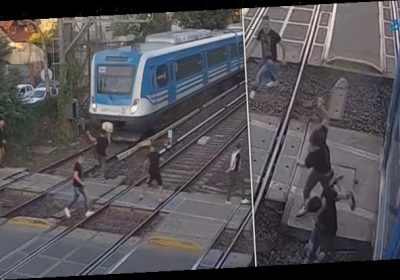 Off the rails! Moment mass brawl erupts on RAILWAY tracks in Argentina with around 20 thugs hurling kicks, punches and rocks before train is forced to make emergency stop

This is the shocking moment a violent brawl of more than a dozen thugs erupts on rail tracks – as passenger trains fly past just inches away.

The fight was recorded on a level crossing in the town of Ramos Mejia, a suburb of Argentine capital Buenos Aires, in the early hours of Wednesday.

Footage shows a large group of men run to the middle of the train tracks before they break out into a fight.

It is understood they had come from bars in the surrounding area. 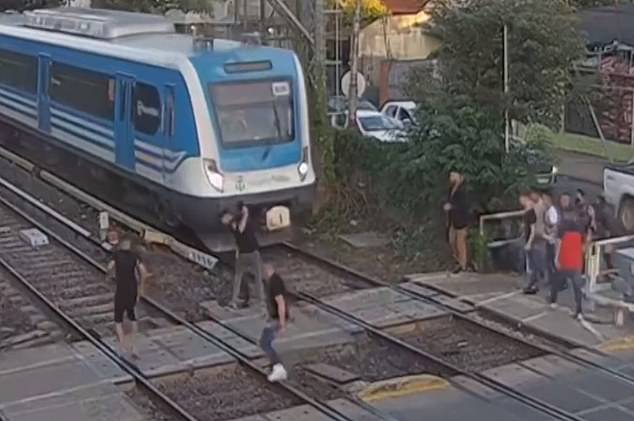 A violent brawl of more than a dozen thugs erupted on rail tracks in the town of Ramos Mejia, a suburb of Argentine capital Buenos Aires

The thugs continue to trade blows even as a train rushes onto the tracks, passing just inches from two of them who carry on their fight.

Another train driver is then forced to make an emergency stop to avoid injuring the group, as the train’s passengers watch the brawl in amazement.

Two women are seen at the side of the railway, apparently shouting for the group to break up the fight. 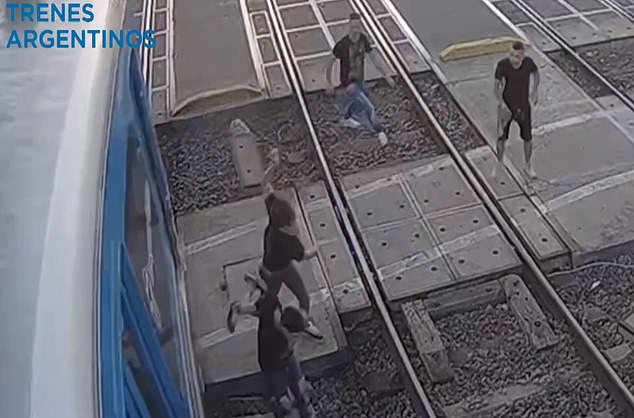 The thugs continue to trade blows even as a train rushes onto the tracks, passing just inches from two of them who carry on their fight

The video ends with several officers appearing at the scene as the brawl finally breaks up, and the police apparently line some of the suspects up next to the tracks.

The driver reportedly alerted the police as soon as the train arrived in the area, but there were no reports of any arrests or of any serious injuries or damages, except for the delay that was caused by the stoppage of the train.

Local media said the people fighting, roughly 20 individuals, were finishing off a night out from several nearby bars and clubs in the area where they had left shortly before the fight broke out at 7am.

There have been no reports on the sanctions the fighters face or if a case has been opened. 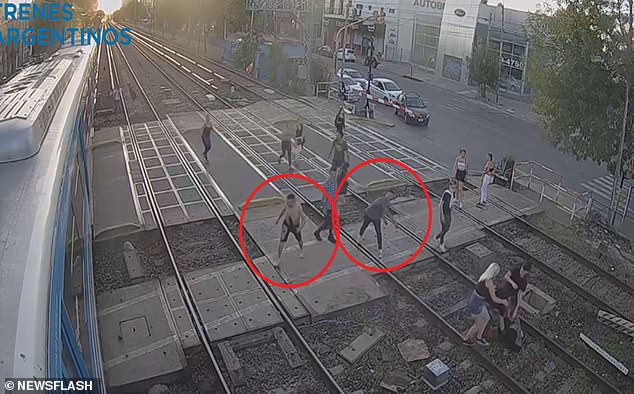