Brexit Britain braces for election while waiting for EU decision Anxious wait drawing out in Britain’s corridors of power as EU leaders set to decide whether to grant UK Brexit delay. 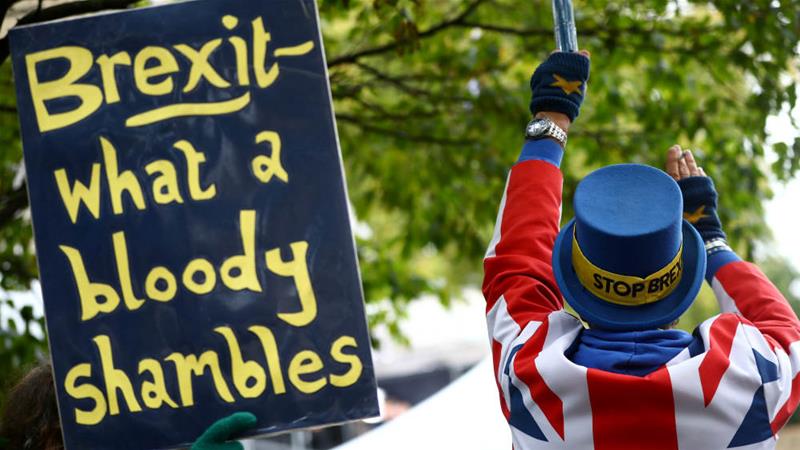 London, United Kingdom – The leaders of 27 European Union nations are still considering whether or not to grant the United Kingdom a delay over its departure from the bloc – and, crucially, how long such an extension should last.

Their deliberations, which reached no conclusion on Wednesday and will restart on Friday, come as the UK is mired in a bitter stalemate over Brexit. There is an impasse between those who want to leave the EU immediately, with no deal; those who want a departure at some point soon, once a divorce deal has been agreed; and those who want to remain in the world’s largest trading bloc.

Prime Minister Boris Johnson has lost his government’s razor-thin working majority after sacking a “rebel alliance” of 21 MPs who defied him to force through legislation aimed at blocking a “no-deal” Brexit on October 31.

Johnson has also lost the support of the Northern Irish Democratic Unionist Party (DUP), which has helped prop up the minority Conservative government since the UK’s 2017 general election but is at odds with the prime minister over his Brexit plans, which they see as a betrayal.

In particular, the DUP believe the Brexit deal brokered by Johnson with the EU threatens to undermine the union between Great Britain and Northern Ireland by placing a form of border down the Irish Sea, effectively leaving Northern Ireland in regulatory alignment with the Republic of Ireland and the EU, but without any representation in the bloc..

“The Johnson government’s bluff – ‘We leave On 31 October, deal or no deal’ – has been called,” Scott Lucas, professor of international politics at the University of Birmingham, told Al Jazeera.

“It has been called by the European Union, by Parliament, by its former Northern Irish DUP partner, and by the courts.”

While European Council President Donald Tusk urged EU leaders to back a delay – and the bloc’s diplomats have been briefing that a three-month delay remains most likely – Johnson is reportedly readying a push for a snap election. Any new poll could change the parliamentary arithmetic and help Johnson ease his Withdrawal Agreement Bill into law, finally completing a tortuous phase in the UK’s three-and-a-half-year Brexit saga.

“There is a 47 percent chance of a general election being held in the final months of 2019,” Jon Worth, politics lecturer at the College of Europe in Bruges, told Al Jazeera.

“If it is to happen before Christmas, it needs to be called as soon as possible.”

There is a 13 percent chance of an election in early 2020, he added, making a combined likelihood of an imminent election 60 percent. Worth – who has won online plaudits for his series of Brexit flowcharts – says the other main likelihood, with a 36 percent chance, is that the current stalemate drags on for months to come.

Johnson pressed the pause button on mammoth legislation to enact his Brexit deal, after nail-bitingly close votes on Tuesday which saw MPs accepting the deal in principle, but rejecting a three-day schedule to debate hundreds of pages of complex legal documentation.

And while he is not in a position to win much support within the House of Commons, Labour, the principal opposition party, also fails to command consensus – and options are few.

“I think it’s unlikely that the numbers can be found for a second referendum in this Parliament,” said Jonathan Lis, deputy director of Influence, a British think-tank set up by a former Conservative Party communications chief.

“Even if the DUP comes on board, which is doubtful, there are too many Labour MPs who oppose it,” he told Al Jazeera.

“But in a general election, it is possible that Labour and the Liberal Democrats could collectively win more seats than the Conservatives – particularly if the Leave vote splits between the Tories and Brexit Party. Right now, it’s simply too unpredictable to call either way.”

An election would need a Brexit delay until at least the end of January.

Irish Taoiseach Leo Varadkar, who favours such a three-month extension, told Dublin’s parliament that if no consensus could be found among the 27 European leaders they may have an emergency summit next Monday.

“My bags are always packed for Brussels and packed they are again,” Varadkar said.

If a January extension is agreed by the EU nations – and it has to be unanimous – it’s game on for the election. If the October 31 deadline is only agreed by a couple of weeks, thought to be France’s preferred option, parliamentary debates over Johnson’s Brexit plan will take on a new intensity.

“Now, Boris [Johnson] faces the choice: drop the bluff and genuinely pursue a deal through November,” Lucas said. “Or it can double down on its gamble and go for a general election with the line, ‘We’re the group defending the will of the people for a Brexit that will never happen – in other words, for no-deal’.

“Because the biggest bluff of all is that there is a form of Brexit that will benefit the UK. There isn’t: there is only economic shock, social tension, and international isolation.

“But can the government hide the economic, social, and international reality long enough to get back into office – and take what is left of the UK off the edge of the cliff?”