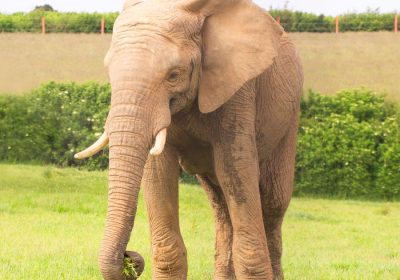 M'Changa, aged 12, died of its injuries after an attack by another of the gigantic African mammals on Friday night.

Staff at Noah's Ark Farm zoo in Wraxall said they are investigating how the incident took place.

A spokesman said keepers are "distraught" after the death and are now looking into "the best way forward" for other elephants at the zoo.

Managing director Larry Bush said: “The Noah’s Ark team are incredibly passionate about all the animals at the zoo and M’Changa’s loss will be felt very deeply.

“He will be missed dearly by all staff as well as our members and visitors.

“We will continue to help promote and contribute to the conservation of elephants into the future.

“Our dedicated team of elephant keepers are understandably distraught over this recent event and we are doing all that we can to support them during this difficult time."

The massive endangered animals have 24-hour access to all parts of their enclosure, with one bull elephant moving during the night into M'Changa's area shortly before the incident.

Elephant Eden is a 20-acre zone housing specialist keepers and their "extensive efforts" to enrich the lives of animals, the zoo said.

Noah's Ark Farm said they successfully lived together for more than three years after a “lengthy process of introduction”.

The spokesman added: "Their behaviour in the wild and in zoos, can often typically be active, boisterous and can at times be aggressive.

“Many keepers and visitors alike have shared their passion in the mission to raise awareness about this important species."

A spokesman for the British and Irish Association of Zoos and Aquariums (BIAZA) said their thoughts are with zoo staff.

He said: “Noah’s Ark Zoo Farm has one of the largest elephant facilities in the UK and Europe.

“Our thoughts are with the dedicated elephant care staff at Noah’s Ark.”