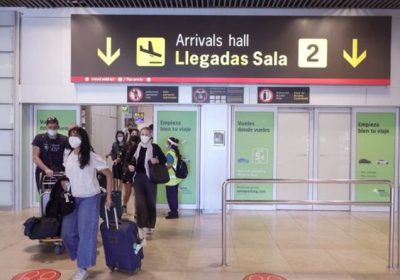 Transport Secretary Grant Shapps announced this week that British travellers returning to the UK from an “amber country”, such as Spain, will no longer need to quarantine if they are vaccinated from July 19. However, the new rules will only apply to those who have been jabbed in the UK. The news did not go down well with expats who had been fully vaccinated abroad.

Sue Wilson, who lives in Bremain in Spain, shared her fury while adding the new rules would be particularly hard for people who wanted to reunite with their family members after so long.

She told the Olive Press: “Not everyone can rely on family members doing the travelling.

“That’s certainly not an option for those with elderly relatives in the UK on limited budgets.

“Brits abroad are yet again being treated as an afterthought by our own Government, and for no good reason.

“Any failure by the UK authorities to recognise the EU Covid passport is just another ridiculous triumph of ideology over pragmatism.

Elsewhere, Michael Soffe, a British person living in Malaga, added he was also “furious” about the decision.

He said: “I am furious about this as all I want to do is visit my 92-year-old parents without having to go into quarantine as I cannot be away from Spain for 10,12,14 days.”

Another Briton named Ruth Woodhouse added: “It is surely discriminatory that this privilege has not as yet been granted to British citizens like myself who live outside the UK and who have followed all the rules but have been probated from visiting loved ones in the UK for 16 months due to the impossibility of spending time in quarantine due to work commitments, financial constraints or not having a property in the UK in which to do so.

“This has been heartbreaking and I consider that our need is as great as – if not greater than – that of people who simply wish to take a holiday (much as I appreciated their desire to do so).”

It comes after Mr Shapps said on Thursday: “From Jul 19, UK residents who are fully vaccinated will no longer have to self isolate when they return to England.”

Under previous rules, those returning to Britain from its top destinations, Spain, France, the US and Italy, all had to self-isolate for up to 10 days.

Italy, Portugal and Spain have also all recently tightened entry requirements for Britons, with Italy requiring five days of quarantine.

He added people must have had vaccines that were administered by the NHS.

“It is easier done from some places, like the EU where they have a digital app coming along, than it is in the United States where I think they have 50 different systems, one for each state.”

Mr Shapps also warned today that people should “expect more disruption than usual” due to covid-related inspections at airports.

He added that most of the queuing will be before departure back to England, with airlines checking passenger locator forms, and whether travellers have taken a pre-departure test and booked a post-arrival test.

He told BBC Breakfast: “So the place to expect queues is the airport you are coming from. Once you get back to the UK all of that is starting to be automated.

“People should expect more disruption than usual but I know that everyone is working very hard to minimise those queues.”