Smooth criminal? British inmate, 30 is caught trying to escape from Portuguese jail by ‘rubbing himself in oil and trying to squeeze through the bars of his cell’

A British inmate has been caught trying to escape a Portuguese jail.

The man, named locally as Mark Roscaleer, 30, is believed to have smashed his cell window and smothered his body in oil in a bid to squeeze through bars he planned to saw through.

His escape plot was foiled at around 11pm yesterday by guards at EP Lisbon, the same prison where alleged pensioner cocaine smuggler Roger Clarke is being held ahead of his trial.

Portuguese TV station TVI said the Briton, who is understood to be awaiting trial on robbery and kidnap charges, had been transferred from another prison in the Algarve town of Silves after an earlier escape attempt in May. 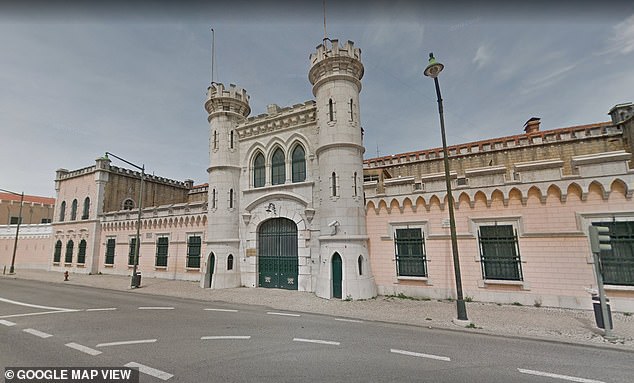 Portuguese Prison Service sources told the newspaper Correio da Manha, ‘a series of clues pointing to an inmate preparing an escape attempt had been found in a F-wing cell’ at EP Lisbon.

A Runcorn-born man named Mark Roscaleer handed himself in to police in October 2015, when he was aged 26, after absconding from HMP Kirkham in Lancashire following nine days on the run.

He was serving seven years and four months for a terrifying raid on an Ellesmere Port pub in 2012.

During the raid he threatened to smash a victim’s skull with a hammer after which he and an accomplice made off with £6,300.

He gave himself up following a police appeal for information.

Officers had delivered seven notices to associates warning them they would be prosecuted if found to be harbouring the criminal.

Retired cook Roger Clarke, 72, was arrested last December with wife Sue, 71, after police in Lisbon boarded their cruise ship and found nine kilos of cocaine inside four suitcases in their cabin.

IT consultant Peter Hambrook, 68, is another Briton who was held at the same Lisbon prison.

He was arrested in May last year after landing in the Portuguese capital from Mozambique with three kilos of heroin. He was cleared after a trial.