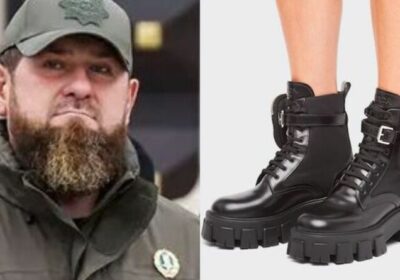 Kadyrov is seen wearing the expensive designer shoes while inspecting the Chechen Republic’s troops and military forces in Grozny. The cruel warlord sent his troops to take part in the invasion of Ukraine along with Putin’s troops since the start of the war. However, Chechen military forces and their leader have been repeatedly humiliated for losing battles and running away from the battlefield.

They have also been extensively mocked as ‘TikTok troops’ for their lively presence on social media, where they show off their skills in absurd videos, for example firing at empty buildings.

Their leader, Kadyrov, is himself very active on social media including TikTok, where he posts videos trying to gain popularity and praise his soldiers’ supposed performance.

Ukrainian army forces appear to have humiliated the Chechen invaders several times, shattering the myth of the hardman dictator.

On March 21, the Security Service of Ukraine claimed that the hardcore Chechen soldiers’ main task, as ordered by senior Russian army officials, is to shoot dead every Russian soldier that tries to surrender.

The Ukrainian security intelligence officers claimed that the Chechen army has suffered “numerous losses”, and called them “TikTok troops” because of the continued footage they post on social media.

The Security Service said: “‘Lice’ Russian soldiers, ‘fence squads’ and numerous losses: how the Kadyrovites are actually fighting in Ukraine.

“Russian propaganda shapes their image as a formidable force capable of carrying out any of Putin’s tasks. But in 26 days of war, Ukrainian soldiers have shattered this myth.”

The Service added: “The Kadyrovites are now called ‘TikTok troops’ because of their love of stage commercials.

“Because during the war they ‘distinguished themselves’ only by video recordings and atrocities against the civilian population.”

Finally, they wrote: “The main task of the Kadyrovites is to ‘clean up’ and kill Russian soldiers fleeing the battlefield.

“That is, they perform the function of ‘charge squads’ and shoot at their own. Although they do not consider the Russians “theirs”, they call them “lice” and are happy to kill them.”

One of Kadyrov’s closest military leaders, Magomed Tushaev, was killed during one of the first days that followed the invasion of Ukraine, during a battle at the Gostomel airport.

Tushaev was leading the 141st motorized regiment of the Chechen National Guard, and his death was confirmed by a captured fighter from the unit.

His death came one day after Kadyrov claimed that his unit had had no losses.

He said: “As of today, as of this minute, we do not have one single casualty or wounded, not a single man has even had a runny nose.

“President (Putin) took the right decision and we will carry out his orders under any circumstances.”

Kadyrov also distributed a video of him speaking with Tushaev on the phone to prove that he is still alive, however, he later admitted the losses.

Ramzan Kadyrov is a ruthless tyrant who has been the President of Chechnya since 2007, taking over following the assassination of his father.

His father, Akhmad Kadyrov, took on the leadership of Chechnya after he switched sides during the Second Chechen war and devoted himself to Putin’s regime.