Burglars use stolen scooter to smash their way into beauty salon This is the shocking moment burglars used a stolen scooter with L plates on to smash their way into a beauty salon.

The two men broke through the door to snatch a till and thousands of pounds worth of stock from Cut Thru Studios in Strood, Kent.

CCTV footage captured the incident which happened just as the Covid-19 pandemic had forced the business to close for another month. 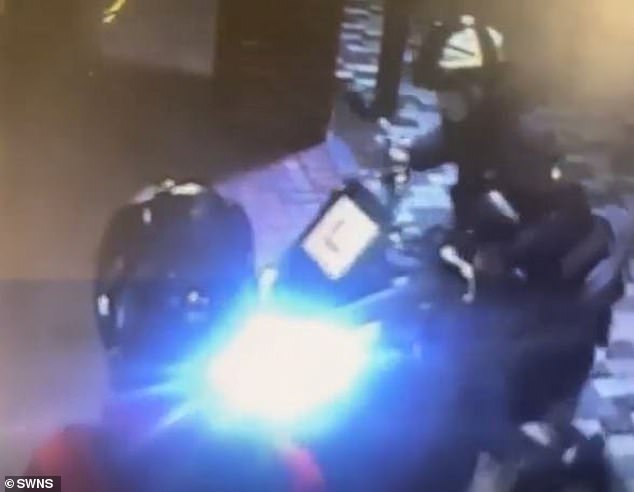 Burglars used a stolen scooter with L plates on to smash their way into a beauty salon in Strood, Kent

Footage shows one of the men ramming the bike against the door twice before finally breaking through on the third attempt as the other man watches.

Police officers were able to retrieve the till and a number of items believed to be stolen from the burglary.

Salon owner Jennifer O’Neill, 35, said: ‘It’s devastating at this time during the struggles with Covid. All my team work so hard they were devastated too.

‘We still opened the next day as we didn’t want to let our customers down.

‘When I watched the CCTV, I just thought…really? It’s just a joke. 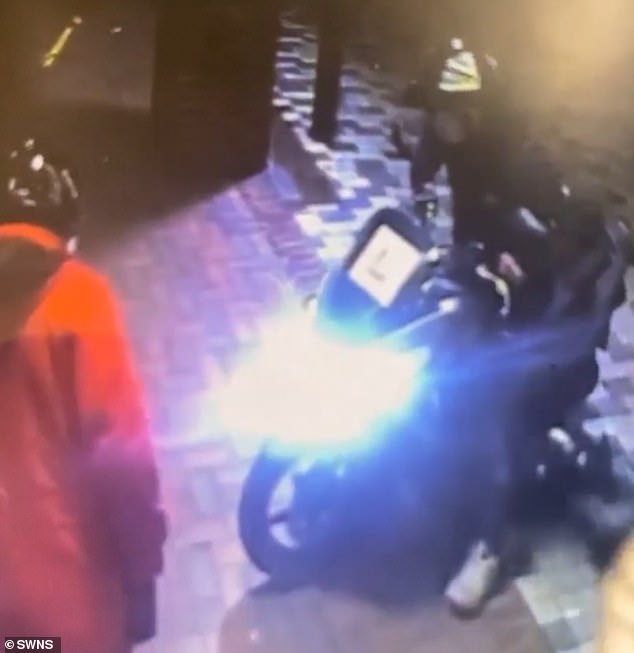 ‘The whole frame is gone on the door. We just couldn’t believe it, really.’

Mother-of-one Miss O’Neill said she was told her salon was targeted as part of a wider stretch of burglaries in the area.

She said: ‘We had a phone call from the police at about 9am, and said they were investigating a house and found a number of stolen items.

‘They have the till. I think the salon is a needle in the haystack of a bigger stretch of burglaries.

‘I got a message from a guy who had his bike stolen from Chatham. They stole it on Wednesday and robbed us on Thursday.

‘They took the licence plate off. I wouldn’t be surprised if they stole the bike to do the robberies.

‘The poor boy, he told me it took three years to pay it off. I was under the impression the police found the bike as well, so hopefully they get in touch with him to give it back.’

Andy Saunders, spokesperson for Kent Police, said: ‘Kent Police was called at 6.30am on 29 October 2020 to a burglary at a commercial premises in Tolgate Lane, Strood.

‘It is reported a door was forced to a shop and that a cash till and items of stock were stolen. 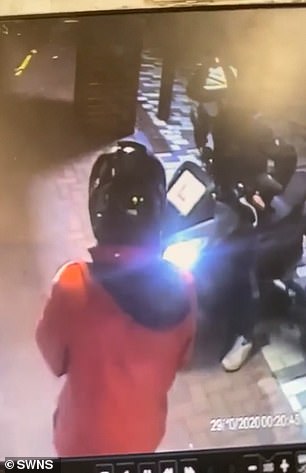 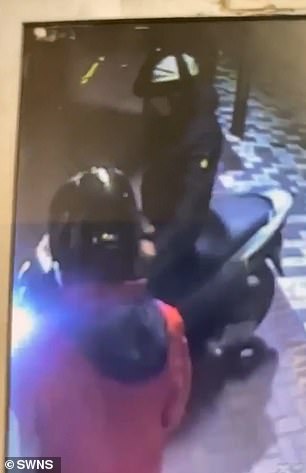 ‘Later that day two men were arrested in connection with the burglary and a number of items believed to be stolen were seized by officers from an address in Chatham.

‘The suspects, aged 24 and 31, were later released, pending further investigation.’

Miss O’Neill, from Strood, added: ‘I have built my business from scratch and am determined to protect it.’

Speaking after the latest raid she said: ‘This time they took loads of GHD straighteners, brushes and dryers we had got in for Christmas. They obviously knew what they were looking for.

‘Thankfully there wasn’t much in the safe, just a float.’