Butcher slams ‘political correctness’ after being warned about signs Pete Lymer has been told by officers to tone down his slogans following complaints about them being ‘offensive’.

Now the 43-year-old has criticised the decision as ‘political correctness gone mad’ after using his sign outside J W Ash & Son, in Ball Haye Street, Leek, to attract customers for years. 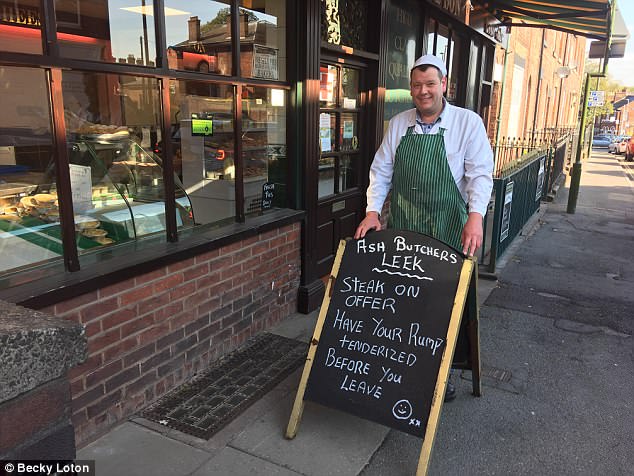 Pete, from Leek, said: ‘We’ve put the signs out for years and it’s always been a bit of a laugh.

‘Just after Christmas apparently somebody complained to the police, saying it was offensive.

‘Last month a lady from the police came in and asked if we could pull our sign in. And a bobby came in last Thursday. They’re just doing their job so I’m not annoyed with the individuals.’

The sign on display at the time said ‘big cocks on special offer’.

Pete added: ‘We did bring them in but then folks kept moaning asking ”why isn’t your sign out?”‘

The blackboard was swiftly changed to say ‘have your rump tenderised before you leave’.

‘It’s a sign, and it’s light humour at the end of the day. People do go past beeping their horns at the messages,’ Pete said.

‘I think it’s just blown out of proportion. I’m not trying to upset anybody, I’m not the kind of person who would write something genuinely horrible.

‘Paul Duffield, who used to work here, started it off with me. About four years ago some ladies posed with him next to the sign – they thought it was funny – and the picture appeared in Take a Break magazine.

‘So I think times have changed a bit. I think political correctness is getting a bit out of hand.’ 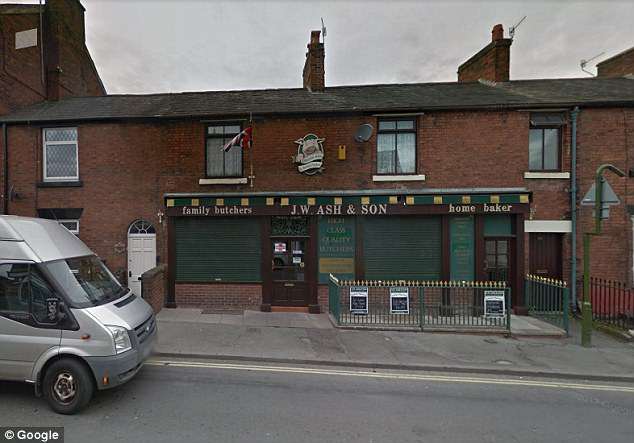 The 43-year-old has criticised the decision as ‘political correctness gone mad’ after using his sign outside J W Ash & Son, in Ball Haye Street, Leek, (pictured) to attract customers for years

Pete had been overwhelmed with responses after he put an appeal on Facebook in January asking people to submit their own risqué sayings.

‘It wasn’t even mostly blokes sending them in, it was women!’ he said.

Andy Woodcock, co-owner of Moorlands Carpets and Vinyls next door, described the blackboard as ‘banter’.

The 43-year-old, from Leek, said: ‘It’s a bit of fun and it does make me laugh sometimes. You see people going past taking pictures of it with their phones.

‘I’ve known Pete a long time and he has a good sense of humour. I don’t know why this has come out now, all of a sudden. More people seem to be offended nowadays or get upset about certain things.

‘I have never thought that they are particularly offensive but you can’t please everybody. I think it’s a bit much the police getting involved.’

Jean Fisher, aged 64, from Leek, added: ‘That is just Pete’s sense of humour. I didn’t think anybody took that much notice.

‘I don’t know why somebody suddenly decided it wasn’t OK. I’ve never thought the signs were too much. It’s quite sad because that’s a part of his shop. He just does it to draw attention to the business. I wouldn’t have thought it was a police matter.’

A Staffordshire Police spokesman said: ‘We’ve received no complaints about signage outside J W Ash and Son butchers in Leek.

‘However, the local Chief Inspector for the Moorlands did advise the owner to give careful consideration to what was written on the boards in case anyone took offence. No other action has been taken.’