New York: Firefighters are struggling to control a bushfire 120 kilometres east of Los Angeles that has burnt more than 8000 hectares.

The fire started on Friday afternoon, local time, in Cherry Valley, California, south-west of the San Bernardino National Forest, and by Sunday had spread across 8000 hectares, the national forest said on Twitter. The fire was 0 per cent contained as early Monday morning, AEST. 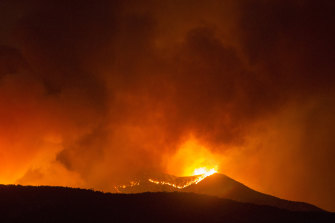 The Apple bushfire in Banning, California, on Saturday.Credit:AP

About 7000 residents in parts of Riverside and San Bernardino counties were ordered to evacuate, said Cpl Lionel Murphy, a spokesman for the Riverside County Sheriff's Department. He said he had not heard of any deaths or injuries caused by the fire.

The fire started as two separate fires that merged, according to the Riverside County Fire Department. The blaze destroyed one single-family home and two outbuildings.

The northern and eastern edges of the fire were in "very steep, rugged hillsides" that were not accessible to firefighting vehicles, according to the US Forest Service, which was brought in to help.

Helicopters and air tankers were used to slow the spread of the fire, the Forest Service said. Hot and dry conditions on Sunday further complicated efforts.

An evacuation centre was set up at a high school in Beaumont, California, and an emergency management official said coronavirus precautions were in place at the school.

The San Gorgonio Wilderness, part of the San Bernardino National Forest, was closed on Saturday and an emergency order was issued on Sunday barring entry to the area.