Cannibal snake filmed eating its OWN body in horrifying footage He began to film the video after noticing that Kronos a kingsnake had confused his own tail for that of another snake.

The snake’s body had to be pried from its own jaws.

Despite having chowed down on its own body and causing bloodshed, the snake wasn’t keen on letting itself go.

Jesse spent close to five minutes encouraging the reptile to regurgitate himself by tapping his nose in a bid to make the creature nervous.

“As you can seem he did not just find a snake to eat, this king snake is in the process of swallowing his own tail,” Jesse said.

“That’s going to be one of our projects before we leave this morning is to try and cornice him that he does not want to eat this snake.

“Because as you can see, the snake that he is eating is himself. 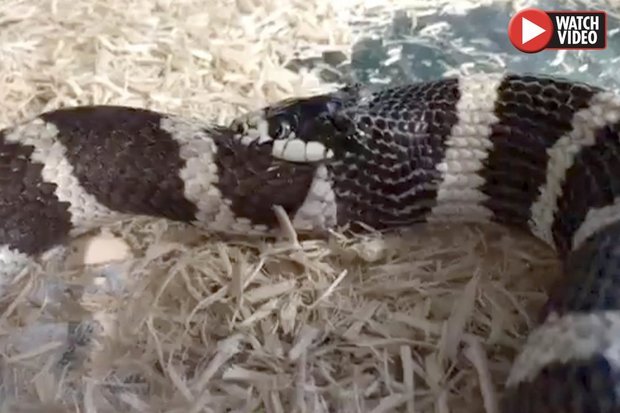 “He is not the smartest snake around.”

Jesse stated that the snake is actually a very good eater and is often being fed.

“He was always in okay shape and, according to his history form, he had a great set up in his first home,” he added.

Last week, one motorist filmed a terrifying snake appearing behind a petrol-pump screen.