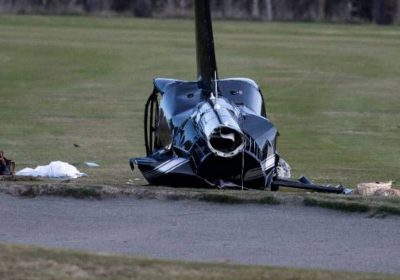 Eight golfers watched the helicopter lift off from the club house, 200 metres away, and head towards them on the seventh hole.

It was a nice day, no wind to speak of.

Onboard were newly-weds Mahdi Zougub and Fay El Hanafy, wedding photographer Rachel Jordon and the pilot.

Little did the golfers know that the flight would last just moments, cover a short distance, and that they would be the ones who would run to their rescue.

“It was headed over the top of us – it was probably 50m to the right of us – flew over us and past us,” a golfer said.

The Robinson R44 helicopter sounded normal but they “noticed something odd”: it didn’t seem to be gaining height.

‘It was obviously struggling.

“It seemed to be going forward and gradually elevating but not elevating at the level that would seem normal.”

The golfer told the Herald: “We didn’t know this at the time but it was obviously struggling to gain height because it was closest to the top of the trees, a lot closer than you would expect to be – it just didn’t go up in height as you would expect it to.”

They lost sight of the helicopter behind the trees as it flew up the eighth fairway and “didn’t think anything more of it.”

That was until the sound of the helicopter stopped.

“Instead of the engine noise getting fainter and fainter, travelling away, there was no engine noise [at all].”

He and another golfer were on the seventh green.

“He said to me, run, and we sprinted towards the helicopter.

Three of his group of four ran to the helicopter.

“I had the buggy right beside me up by the green – I thought jump in the buggy – take that just in case we need to try and get people [from the scene].

“I didn’t know what we would encounter,” he said.

The second group of four golfers further back on the fairway also ran to the crash scene.

“We all got there about the same time and two people called emergency services.”

They found the helicopter flat on its belly, sitting upright near a bunker by the eighth green.

The skids had snapped off with the hard landing; the tail rotor was sliced in half and lying a short distance away.

The pilot and the passengers were still buckled into their seats.

“Three of them were pretty quiet over the course of the next few minutes. The bride got really upset, making a lot of noise, crying, wanting her mother all that sort of stuff.”

The first thing the golfers did was unbuckle the group, “in case we had to get them out really quickly” if there was a fire.

Jordon, in the front passenger seat and the groom in the back, seemed determined to get out.

“They had already started moving to get out and obviously we didn’t want to restrain them or anything like that.”

The golfers were aware that they had suffered serious injuries.

“They were saying they had sore backs.”

He complained about having sore ribs and a sore chest.

“He, I think, was the first person I helped out of the helicopter.”

“He got out, we got behind him and gently lay him down on the ground beside the helicopter.”

Jordon also started making moves to get out of the chopper and “the same thing, we gently lay her down beside the helicopter”.

The golfers kept them calm, reassured them and looked after them the best they could.

Some of them wanted to ring family members.

“Rachel wanted to ring Eric [her husband] so I did that and talked to him. Explained to him what had happened and handed the phone over to Rachel and she talked to him.

“She told him about how scared she was and how she felt like she had broken her back.”

The groom rang the wedding party who were back at the clubhouse.

“He rang his father-in-law I think and then handed the phone to me. I talked to him and made him aware of what happened and where we were.”

Within 10 minutes the wedding party and staff drove up in cars to the crash.

“One of them passed out at the scene after a few minutes.”

Three of the injured were flown to Christchurch Hospital, the fourth taken away by ambulance.

Jordon sustained injuries to her spine, ribs, sternum, arms, feet and lungs and was transferred to Middlemore Hospital.

The groom Mahdi Zougub suffered a broken back, injuries to both knees, lung and chest bruises.

The pilot has been moved to Burwood Hospital, where she is in a specialised spinal unit.

The golfer spoke to the Herald asking not to be named as he doesn’t want his actions to be considered heroic.

“I think we did the best we could in the situation and we just tried to help them and reassure them.