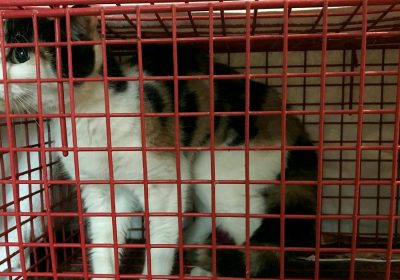 A cat that was presumed missing by its owners was found trapped in the cavity of a wall after a three week ordeal.

Molly the cat became lodged in the wall when her owners were moving house and despite searches, including returning to the home with food, her owners could not find her.

Glyn Stafford moved into the house in Glossop, Derbyshire, and tried to help find the cat by leaving milk and food out every day.

Incredibly on Wednesday April 14, having assumed Molly had run off during the move, Glyn heard meowing from a wall near the kitchen.

Mr Stafford said: “I was quite surprised when I heard the meow after all that time and called the RSPCA straight away.

“I have had cats myself so I really wanted her to get out and be safe.”

Despite finding the cat even RSPCA officer Jenny Bethel could not find a way to remove the cat from the wall cavity.

With little option left they called Derbyshire Fire and Rescue for help.

Thankfully firefighters were able to take up floorboards from the bathroom above the kitchen and were able to reach Molly from there.

Ms Bethel said: “She must have been terrified spending all that time trapped in such a tight spot.

“She looked quite skinny so I took her to a local vet and fortunately she was found to be healthy but in need of feeding up.”

Mr Stafford said: “The floorboards had to come up to get her but the damage can be repaired.

“The cat’s life is what mattered.

“The RSPCA and fire service did a great job and I was so relieved to see Molly looking so well really even though it appears she hadn’t eaten or had any water for such a long period of time.”