Video from outside the home of a family of 11 found dead appears to confirm they deliberately hanged themselves for ‘spiritual salvation’.

The bodies, two aged just 15, were found hanging in the house in New Delhi last week, most of them bound and blindfolded.

Police believe the family didn’t intended to commit suicide but ’emerge stronger’ after the spirit of their dead patriarch appeared to save them. 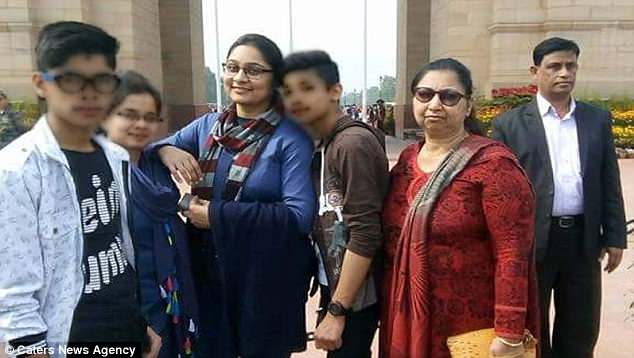 Police in New Delhi said they found 11 bodies in a home in the village of Burari on Sunday, 10 of them blindfolded and hanging from the roof. Pictured: the Bhatia family 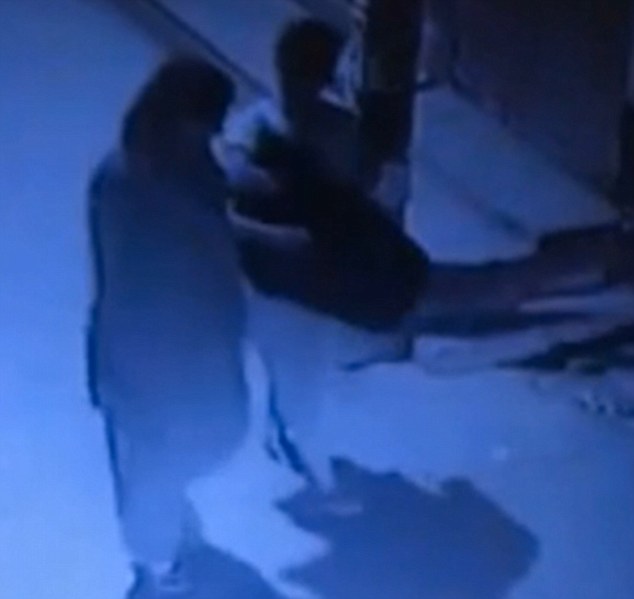 Video from outside the home of a family of 11 found dead appears to confirm they deliberately hanged themselves for ‘spiritual salvation’.

Narayana Devi, the family’s 77-year-old grandmother, was found in another room by neighbours about 7.40 the next morning.

CCTV showed the family preparing for the mass hanging, first by bringing the stools they stood on for the ‘ritual’ inside about 10pm on June 30.

Fifteen minutes later, Dhruv and Shivam appeared carrying other materials used in the hangings, according to NDTV.

Police believe there was ‘no outside role’ in the deaths, according the NDTV, but told the BBC they hadn’t ruled out murder and were still investigating.

The 11 family members kept diaries over 11 years that gave a glimpse of the bizarre ritual they were following that led them to all die at 1am on Sunday. 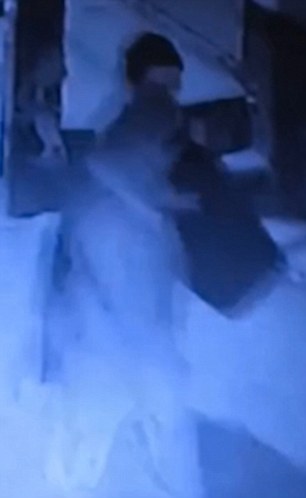 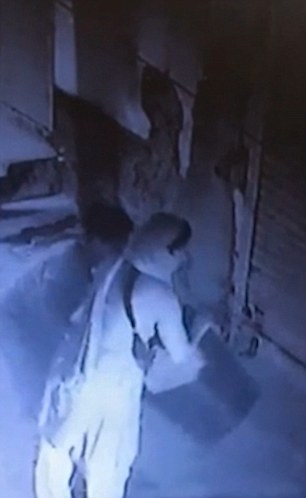 CCTV showed the family preparing for the mass hanging, first by bringing the stools they stood on for the ‘ritual’ inside about 10pm on June 30

Lalit believed he was getting instructions in visions of his father Gopaldas, who died 10 years ago, about how to achieve salvation – which the rest of the family followed.

‘Keep water in a cup, when it changes colour, I will appear and save you,’ the final entry in the final diary, made that day, read.

The bodies were bound with their hands behind their backs, blindfolded, gagged, their faces covered in bandages and with cotton shoved in their ears.

The only one not found like this was Lalit’s wife Teena who appeared to have tied them up. After the ‘ritual’, everyone was to untie each other, the diary said.

An earlier diary entry read: ‘The human body is temporary and one can overcome fear by covering the eyes and mouth.’

The family attributed a run of good luck to following the advice from Lalit’s hallucinations, which he began writing down in 2015. 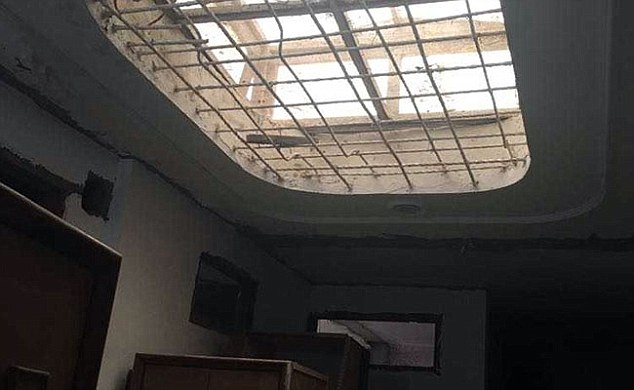 ‘This was a final thanksgiving to the spirits,’ a police officer told NDTV, after the family’s finances improved and Priyanka finally got engaged.

‘In your last hours, while your last wish is fulfilled, the skies will open up and the earth will shake, don’t panic but start chanting the mantra louder,’ Lalit wrote.

10 pm: The older daughter-in-law of the family brings in stools

10:15pm: Teen boys Dhruv and Shivam bring other things used in the hangings

10.57pm Bhuvanesh takes the dog for a walk

11.04pm They go back inside the house

5.56am A truck leaves behind milk cartons, which remain untouched

7.14pm A neighbour enters the house and finds the bodies

‘I will come to save you, I will bring you down and help with the others too.’

The diaries also spelled out the ‘road to god’ they were to take before the hanging, backed up by the CCTV footage.

Nine people would hang from the ceiling and one person, ‘Baby’ – the widowed sister of Lalit – would be near the temple, on a smaller stool.

One of the officers reportedly said: ‘The notes say if a group of 11 people follows these rituals, all problems would ease out and they would attain salvation.

‘Some notes have dates on which they were written while others didn’t have it. All the notes talk about reaching the end and gaining peace.’ 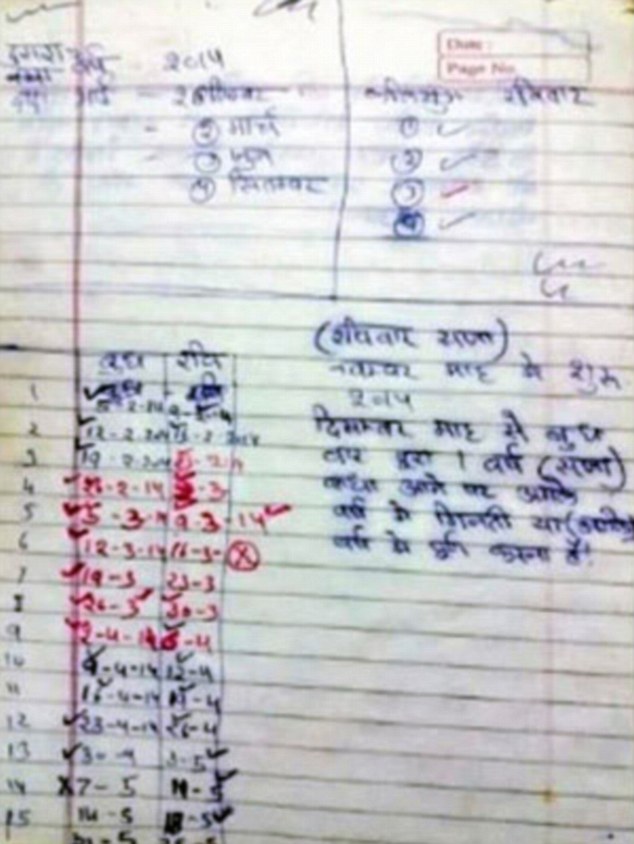 A receipt for the 20 roti ordered at exactly 10pm on the night of the deaths, as instructed by the visions detailed in the diaries

Another officer said: ‘We have found handwritten notes detailing how hands and legs are to be tied and are quite similar to the manner in which the bodies of 10 persons were found.’

The ‘exhaustive’ diaries were now being examined, he said.

There were no bullet marks on the bodies of the victims, and there was no sign of forced entry into the house, police said.

But relative Ketan Nagpal said: ‘They were not facing any financial issues and had not taken even a single loan. Everything was fine. Why would they kill themselves? ‘

The family had been living in the house for more than two decades, the Hindustan Times newspaper reported. 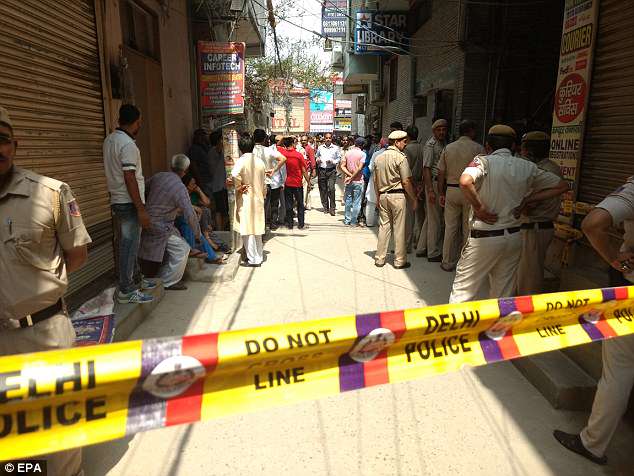 The victims belonged to a family and most had lived in one home in Burari village in the northern part of New Delhi, said police officer Vineet Kumar. Pictured: Police at the scene 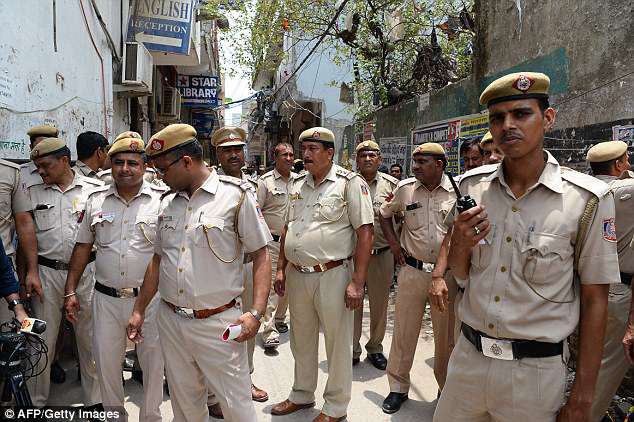 The family was living in the house for more than two decades, the Hindustan Times newspaper reported. It said the house belongs to a businessman who ran a plywood shop and dairy