China is using its economic and diplomatic might to carry out the ‘most intense attack’ ever on the global system for protecting human rights, a leading campaign group said Tuesday, sparking a furious response from a Chinese official.

Human Rights Watch (HRW) made the allegation in its annual report, launched at the United Nations headquarters in New York two days after its executive director Kenneth Roth was barred from entering Hong Kong during his trip to release the study there.

The NGO accused President Xi Jinping’s government of overseeing ‘the most brutal and pervasive oppression that China has seen for decades,’ including building a ‘nightmarish surveillance system’ in Xinjiang province. 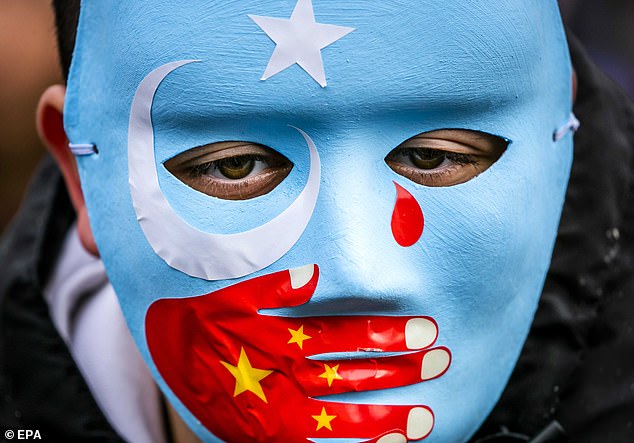 American charity group Human Rights Watch has accused China of carrying out the ‘most intense attack’ ever on the global system for protecting human rights, including building a ‘nightmarish surveillance system’ in Xinjiang province. Pictured, members of the Chinese Muslim community and its sympathisers demonstrate in Amsterdam on December 29 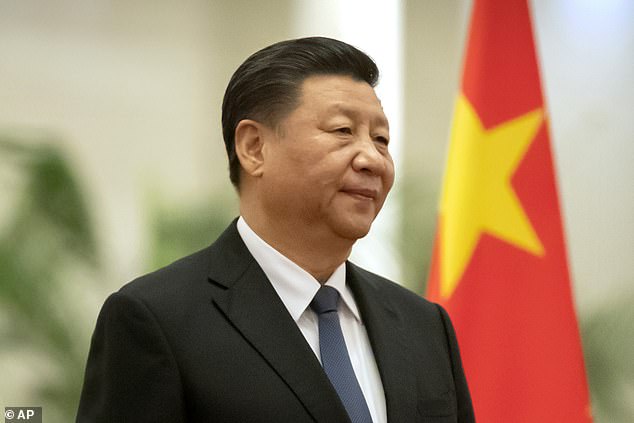 The group’s annual report accuses Chinese President Xi Jinping’s government of overseeing ‘the most brutal and pervasive oppression that China has seen for decades – allegation that have sparked a furious response from a Chinese official. Pictured, Xi stands during a welcome ceremony for Kiribati’s President at the Great Hall of the People in Beijing on January 6

To fend off global efforts to hold it to account, Beijing has ‘significantly increased’ efforts to undermine the international institutions created in the mid-20th century to defend human rights, HRW said.

‘Beijing has long suppressed domestic critics. Now the Chinese government is trying to extend that censorship to the rest of the world,’ Mr Roth said in the 652-page report.

‘If not challenged, Beijing’s actions portend a dystopian future in which no one is beyond the reach of Chinese censors, and an international human rights system so weakened that it no longer serves as a check on government repression,’ he added. 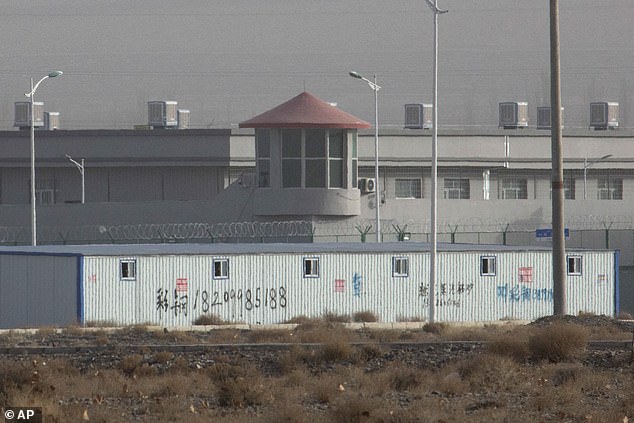 Chinese officials have said that the country’s ‘vocational education centres’ in Xinjiang, referred to as ‘concentration camps’ by human rights activists, have made significant contribution to the international counter-terrorism efforts. In this photo taken on December 3, 2018, a guard tower and barbed wire fences are seen around a facility in Artux, Xinjiang, China

Mr Roth was supposed to give a news conference this week in the semi-autonomous Chinese region of Hong Kong, which has been battered by nearly seven months of occasionally violent protests, in China’s biggest political crisis in decades.

But the 64-year-old was turned back by authorities at the city’s airport on Sunday, with China defending the move by saying HRW had incited pro-democracy activists in Hong Kong.

Mr Roth called the claim ‘preposterous’ as he launched HRW’s World Report 2020, which reviews human rights practices in nearly 100 countries, at the UN.

‘It’s insulting to the people of Hong Kong,’ Mr Roth said, adding that the Chinese government was scared the ‘indigenous’ movement could spread to the mainland.

‘It’s also frankly ludicrous that my colleagues and I have the capacity to mobilise a million people or more on the streets of Hong Kong repeatedly for the past six months,’ he added. 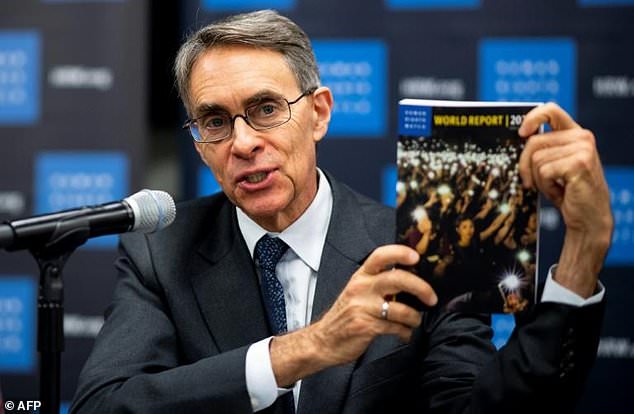 Human Rights Watch Executive Director Kenneth Roth speaks during a news conference to launch the 2020 World Report at the United Nations in New York on January 14, 2020 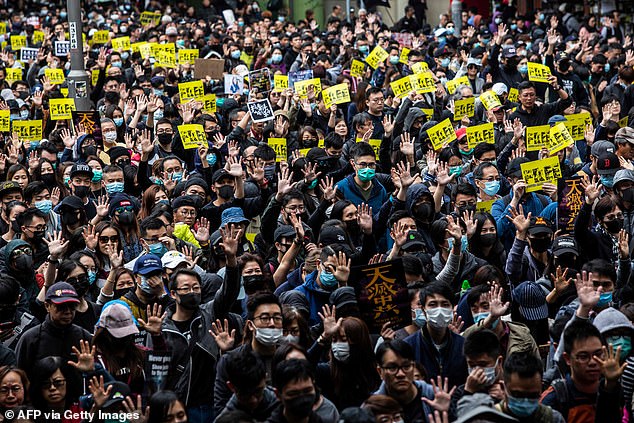 Mr Roth was barred from entering Hong Kong on Sunday for ‘immigration reasons’ as he travelled to the Chinese-ruled city to launch the annual report. In the picture above, pro-democracy protesters gather ahead of a planned march in Hong Kong on January 1 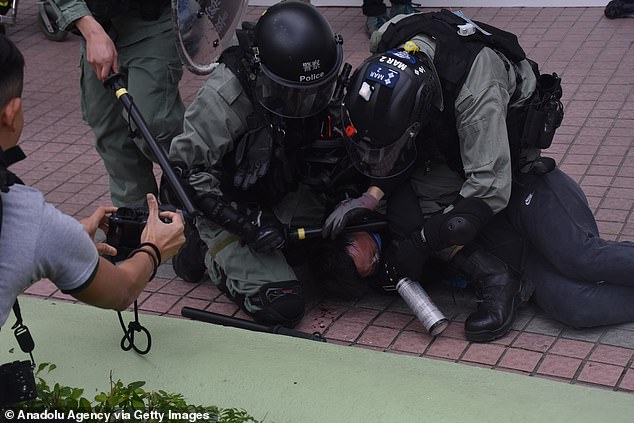 Mr Roth said he was held up at immigration for around four hours and subjected to ‘an extremely thorough security check’. Above, riot police intervene protesters with batons and tear gas during a demonstration against parallel trading in Hong Kong on January 05

Mr Roth was challenged by an official at China’s mission to the UN as he wrapped up his news conference.

HRW’s report accuses China of ‘repeatedly threatening other member states at the United Nations to protect its image and deflect discussion of its abuses.’ 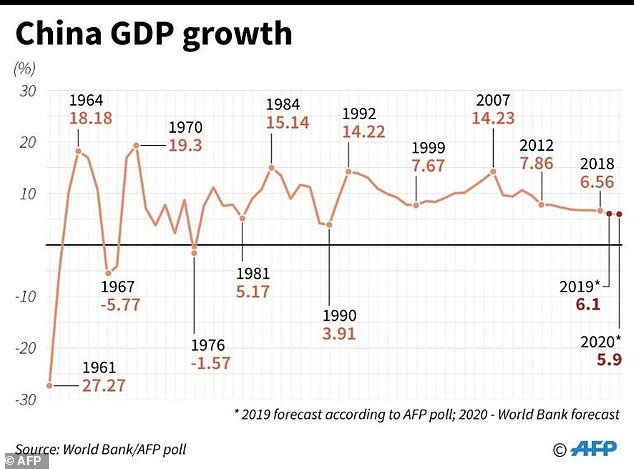 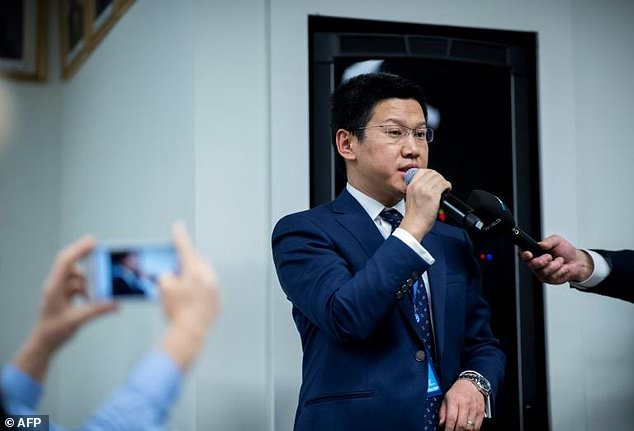 Xing Jisheng, first Secretary of the Chinese Mission at the UN, said HRW’s report was full of ‘prejudices and fabrications’ as he challenged Mr Roth during his news conference

The document says pressure has even reached Secretary-General Antonio Guterres, noting that he has been unwilling to publicly demand an end to the detention of Muslims in Xinjiang.

Mr Roth criticised Guterres for making ‘generic’ statements on human rights issues and dodged a question about whether he should be re-elected for a second term.

He said the United States’s ‘misguided’ withdrawal from the world body’s Human Rights Council in 2018 had allowed China to exert greater influence over the institution, routinely blocking initiatives.

Mr Roth slammed western countries for falling to call out China, which has a permanent seat on the UN Security Council, saying they had been ‘missing in action’.

‘Some leaders, such as US President Donald Trump, Indian Prime Minister Narendra Modi and Brazilian President Jair Bolsonaro, bridle at the same body of international human rights law that China undermines,’ he wrote.

Mr Roth added that the European Union had been distracted by Brexit and handicapped by nationalist member states.

HRW called for democracies to act together to counter Beijing’s strategy, including offering alternatives to Chinese loans and freezing the assets of officials involved in the crackdown in Xinjiang.

It added that red-carpet treatment for Chinese officials should be conditioned on ‘real progress on human rights.’