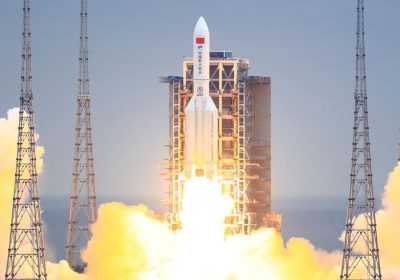 China wants to blast Earth-bound asteroids with massive rockets to divert their path.

To practice the potentially world-saving defence, researchers have set their sights on firing more than 20 rockets into space.

According to simulations carried out by China’s National Space Science Centre, 23 Long March 5 rockets — which weigh 900 tonnes on Earth — are enough to nudge an asteroid off-course.

The impact is calculated to divert a soaring space rock by no less than 9,000km, which is 1.4 times the Earth’s radius.

China's Long March 5B rocket was in free fall earlier this year, travelling around the world every 90 minutes until it broke up over the Indian Ocean, The Independent reports.

NASA is tracking a large asteroid that could be up to 220 metres wide and is heading towards Earth's orbit.

The asteroid, labelled 2008 GO20, is double the size of the infamous London landmark Big Ben.

The chances of an asteroid actually colliding with Earth might be low but Chinese researchers are targeting the giant 78 billion kg rock known as Bennu.

Classified as a B-type asteroid, the 4.5 billion-year-old Bennu is made up largely of carbon and various other minerals.

While it could contain molecules dating back to the formation of life on Earth, Bennu might also have a role in the planet's destruction.

It would currently take three years for rockets launched to finally hit the asteroid, The Independent reports.

Researcher Li Mingtao, is quoted in the South China Morning Post: "[It is] possible to defend against large asteroids with a nuclear-free technique within 10 years."

Excess fuel in the rockets after covering the massive distance could be used for extra thrust in the collision as well as increasing the total mass of the rocket.

Scientists working on the project say only a few minor modifications, such as adding thrusters, are needed to prepare existing rockets for the mission.

Nasa expects its Osiris-Rex spacecraft to return to Earth, with samples from Bennu in 2023.