The Chinese Communist Party is the greatest threat to religious freedom in the world today, according US Secretary of State Mike Pompeo.

In a scorching speech delivered in Jakarta on Thursday to Ansor, the youth wing of Indonesia's Nahdlatul Ulama organisation – a moderate Muslim movement which claims 90 million members – Pompeo launched a withering critique of China for its treatment of people of faith. 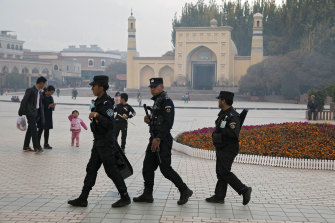 Uighur security personnel patrol near the Id Kah Mosque in Kashgar in western China’s Xinjiang region in 2017. Uighurs live in a constant state of surveillance.Credit:AP

"The gravest threat to the future of religious freedom is the Chinese Communist Party's war against the people of all faiths – Muslims, Buddhists, Christians and Falun Gong practitioners alike," he said.

"The atheist Chinese Communist Party has tried to convince the world that its brutalisation of Uighur Muslims in Xinjiang as part of its counter-terrorism efforts, or poverty alleviation, depending on which audience they are speaking to." 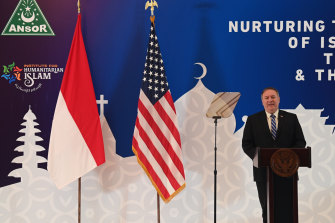 US Secretary of State Mike Pompeo delivers his speech at the Nahdlatul Ulama in Jakarta on Thursday. He renewed the Trump administration’s rhetorical onslaught against China as the American presidential election looms. Credit:AP

Pompeo is visiting the world’s biggest Muslim-majority nation as part of a regional trip to bolster trade and security ties and to encourage Indonesia – and other nations in the region – to push back against China's growing economic and military power in the region.

Pompeo urged Indonesians to search for the facts regarding the treatment of the Uighur people in the Chinese province of Xinjiang, rather than "looking away".