Guayaquil, Ecuador: Ecuador's armed forces say dozens of vessels from a predominantly Chinese fishing fleet operating near the Galapagos Islands have turned off tracking systems to prevent monitoring of their activities.

Of around 325 ships still fishing in the waters near the ecologically sensitive Galapagos, 149 have at some point in recent months cut off communications, Navy Commander, Rear Admiral Darwin Jarrin said. 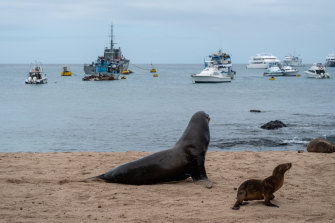 Sea lions on a beach in front of fishing and tourist boats on San Cristobal, Galapagos Islands, Ecuador. The country has been complaining about Chinese vessels overfishing in its vicinity.Credit:Getty Images

Some had also changed the vessels' names to avoid supervision, he said.

"In this period, 149 ships have turned off their satellite systems … we know the name of the ships," Jarrin said during a press conference. He declined to identify the vessels.

The complaint comes as the South American nation is seeking to prevent unsustainable fishing off its coast while also avoiding a confrontation with China, its largest financier and a major market for its shrimp export business. In 2017, it apprehended a Chinese-flagged vessel with 300 tonnes of shark and fish on board.

A representative of the Chinese embassy declined to comment. 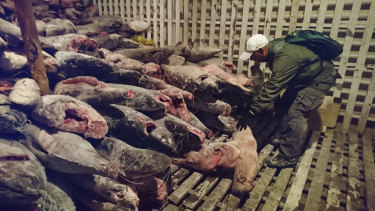 In 2017, a park ranger takes part in the inspection of a Chinese flagship when 300 tonnes of marine species, several of them in danger of extinction, were found in the Galapagos Islands, Ecuador, and the ship and its crew were detained. Credit:AP

Ecuador says the fleet has not entered its territorial waters. But environmentalists say this type of fishing allows vessels to take advantage of the abundant marine wildlife that travels in the waters between the Galapagos and the mainland.

"It is a breach [of protocol] on the high seas, because they do not want us to know what they are doing and the activities they carry out," said Defence Minister Oswaldo Jarrin.

The New Zealand-based South Pacific RFMO, one of the organisations that provides guidance on fishing practices in the area, did not immediately respond to request for comment.

Since 2017, the Chinese fishing fleet has arrived in the summer months to the outskirts of the Galapagos protected area, attracted by marine species such as the giant squid or the hammerhead shark, the latter of which is threatened species.

China has promised a "zero tolerance" policy toward illegal fishing, and it has authorised the Andean country to supervise the vessels.

It has also proposed a fishing moratorium in the area near the Galapagos between September and November, though the fleets usually leave the area before that period begins.

China is embroiled in deep sea fishing disputes around the world, chiefly in the South China Sea and the waters of Asia Pacific.