A Chinese state newspaper has been banned from posting on one of its social media accounts due to its coverage on Beijing’s new coronavirus outbreak.

Officials have censored The Beijing News on Chinese twitter-like Weibo since Thursday after some of its COVID-19 reports were deemed ‘misleading and taken out of context’, according to an official statement.

The news outlet, which had been on the forefront covering the health crisis in the capital city, is considered by many as one of the few Chinese media that are critical of the country’s social issues. 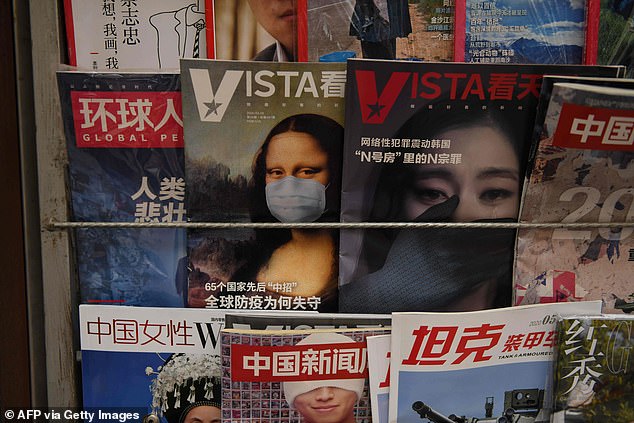 A Chinese state newspaper has been banned from posting on its social media account after some of its stories are deemed by the authority as ‘misleading’. The picture taken on June 22 shows Chinese magazines being displayed at a news stand in the city of Beijing, China 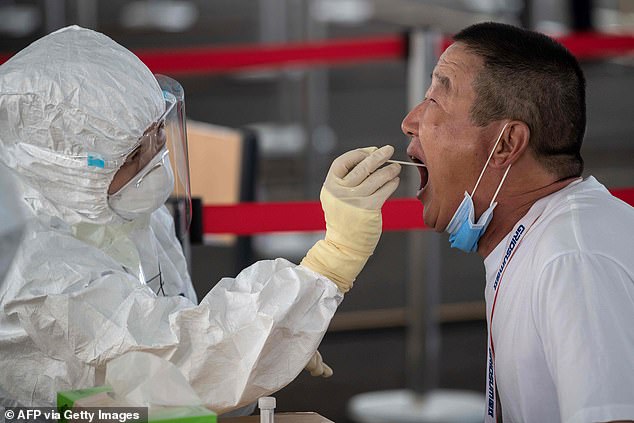 The officials have censored The Beijing News on Chinese twitter-like Weibo from Thursday after ‘some of its reports on Beijing’s coronavirus outbreak were misleading and taken out of context’. Pictured, a health worker collects swab samples from a resident in Beijing

It comes after China has reportedly clamped down on news articles and journalists that criticise the government’s handling of the COVID-19 outbreak that has infected nearly 10million people worldwide.

The Cyberspace Administration of China released a notice yesterday, announcing to punish the state paper for its coverage on the new infection cluster in Beijing.

The statement claimed that ‘some reports, particularly about Beijing’s coronavirus outbreak, were misleading, taken out of context and confusing the public.’

It continued: ‘It has seriously disrupted the order of sharing information online. Its social impact is vile.’

The officials claimed that the decision came after receiving complaints from web users but did not specify exactly which news stories were responsible for the censorship. 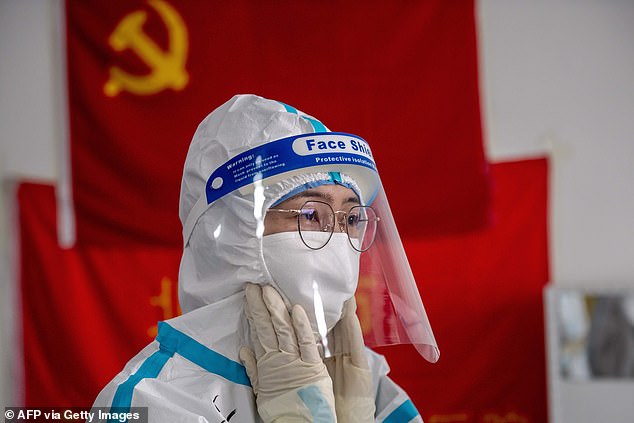 China has reportedly clamped down on news articles and journalists that criticise the government’s handling of the COVID-19 outbreak that has infected nearly 10million people worldwide. A medic is pictured preparing for her shift at a coronavirus testing site in Beijing 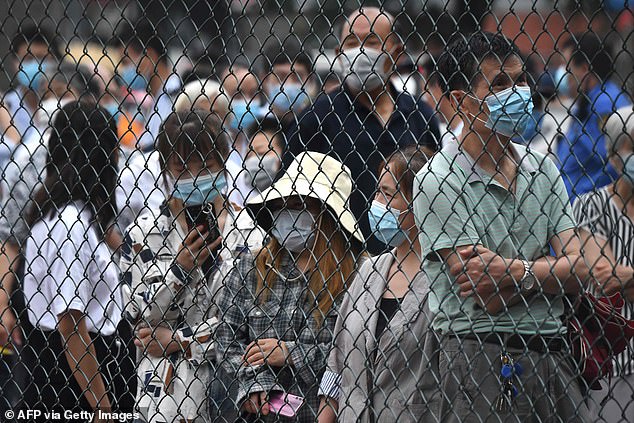 Many suspected that the state newspaper had angered the Communist government for uncovering the truth about the outbreak in the capital city. Pictured, people wearing face masks gather at an outdoor area to receive nucleic acid testing for the coronavirus in Beijing

Many suspected that the state newspaper had angered the Communist government for uncovering the truth about the outbreak in the capital city.

The Beijing News published an article on June 14 with a headline suggesting that over 2,000 people had tested positive at the Xinfadi, a sprawling seafood market linked to Beijing’s new cluster.

The article’s title was amended after being criticised by the public for allegedly missing out information, according to US-based media Radio Free Asia.

The news outlet published another story on June 15, saying that a Chinese top medical expert had blamed Europe for Beijing’s virus outbreak.

The article was reportedly slammed by the Communist party officials as ‘misinterpretation’. 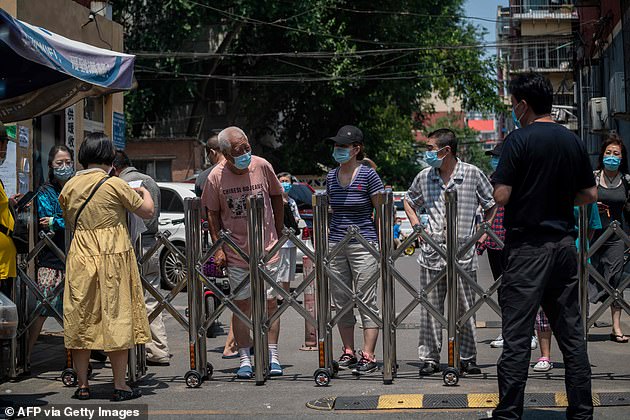 The Beijing News published an article on June 14 with a headline suggesting that over 2,000 people had tested positive at Xinfadi. The picture taken on June 19 shows people in lockdown wait behind a barrier for their goods to be delivered to a residential compound in Beijing 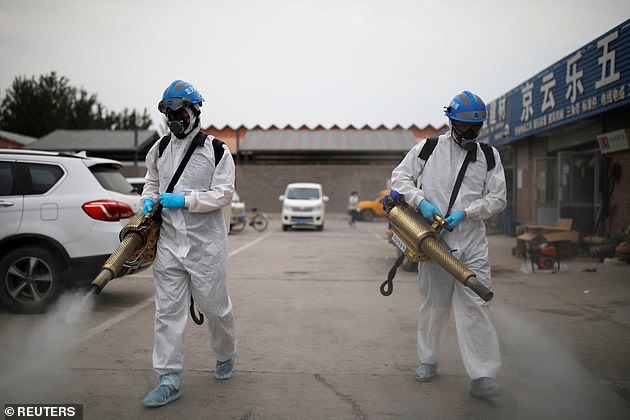 Volunteers from the Blue Sky Rescue team, in protective suits, disinfect the Nangong market yesterday amid a new outbreak in Beijing

The Beijing News issued a formal apology on its Weibo account on the next day, claiming that it was ‘a professional error’.

A screenshot circulated online allegedly shows that a reporter from The Beijing News was assaulted by guards and residents while trying to report from another seafood market in Beijing following the new outbreak.

Established in 2003, The Beijing News has been known for exposing the social issues in the country with in-depth investigations.

The former owner of the state newspaper, Dai Zigeng, had his party membership revoked in March for what the authority described as ‘not properly carrying out responsibilities and causing bad influences.’

China has reportedly harassed, threatened and silenced multiple citizens who vowed to hold the government responsible for its perceived missteps in dealing with the new coronavirus outbreak. 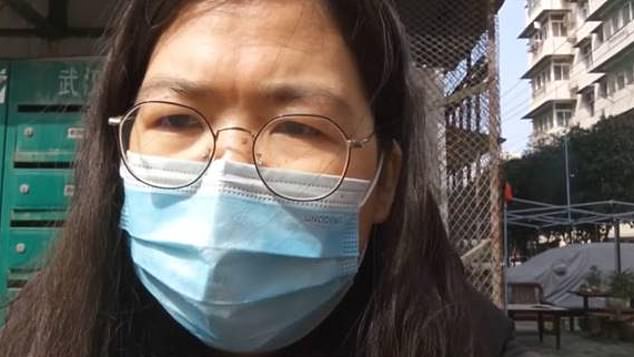 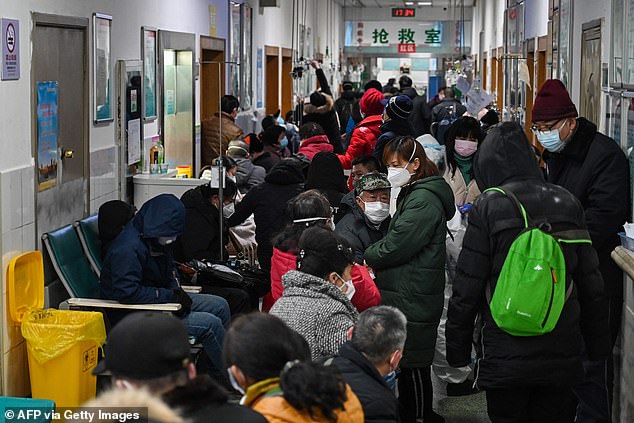 Ms Zhang had live-streamed scenes onto Twitter and YouTube, including evidence of crematoriums operating at midnight. The picture from January 25 shows mask-donning Wuhan residents queuing for medical attention at Wuhan Red Cross Hospital

Zhang Zhan, a Chinese citizen journalist who uploaded coronavirus reports from Wuhan onto social media to criticise the city’s handling of the outbreak was arrested last Friday, according to reports.

She is believed to be the fourth Chinese citizen reporter to have vanished or been detained after posting dispatches from Wuhan during the COVID-19 outbreak.

Chen Qiushi, 34, was last heard from on February 6, and his whereabouts are unknown. Fang Bin, a businessman, also disappeared in early February and is believed to have been taken into state custody. Li Zehua, 25, disappeared in late February before re-appearing in late April.

A report in March revealed that Coronavirus-related articles published by major Chinese news outlets ‘were wiped out almost every day’ during the pandemic because they were deemed too negative.

Other grieving Wuhan residents were allegedly hassled, intimidated and hushed by authorities after planning to draw up petitions against officials over their response to the health crisis, which has killed more than 490,000 worldwide.

The city of Beijing has discharged all of its imported coronavirus cases as the Chinese capital continues to battle a domestic infection cluster linked to a seafood market.

The last patient was discharged from hospital yesterday, according to the officials from Beijing’s Health Commission.

The capital city has recorded a total of 174 COVID-19 cases imported from abroad since the coronavirus outbreak erupted in Wuhan. 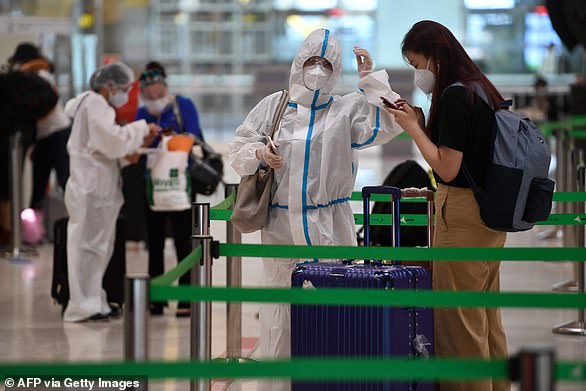 The capital city has recorded a total of 174 COVID-19 cases imported from abroad. Pictured, a passenger waits to check in for a Beijing-bound flight at a Madrid airport

Beijing had registered no new cases for nearly two months until June 11 when the city recorded a fresh local infection.

Since then, a infection cluster linked to a major wholesale food market in the city has been detected.

Nationwide, the country has recorded a total of 85,148 confirmed infections, of which 493 are active. The death toll remains at 4,634.