Daredevils have been photographed leaping from Durdle Door’s 200-ft-tall arch three months after cliff divers had to be rescued by air ambulance after seriously injuring themselves.

Sunseekers climbed across the cliff before leaping into the water beneath them on the Dorset coast earlier today.

Some were seen carrying inflatable rings as they made their way across the dangerous rock face.

It comes just months after two men in their 20s were left with life-changing injuries and another broke his leg after jumping from the cliff. 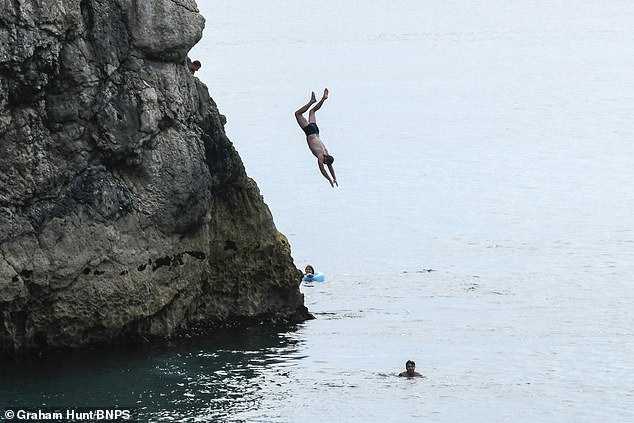 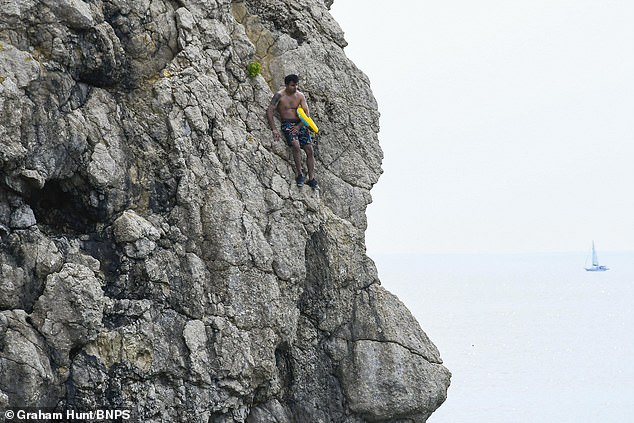 Dorset police previously described the danger posed by jumping from the cliff as ‘critical’.

In a post on social media an officer wrote: ‘The arch of Durdle Door is approximately 200 feet in height. Hitting water from that height can be critical.

‘This is further compounded by tides, currents and altering depth of the sea bed. It is not an appropriate location for this type of activity.’

The divers launched themselves into the sea from a height during a day out at the beach on what was one of the hottest days of the year so far.

One man dived headfirst into the sea despite the threat from tides and a changing sea bed depth.

The mercury hit 84F (29C) on the Dorset coast on Saturday, with warm weather set to continue until Wednesday.

On May 30 two air ambulances were called to Durdle Door after a man was knocked unconscious when he was dashed by rocks following a daring jump into the water. 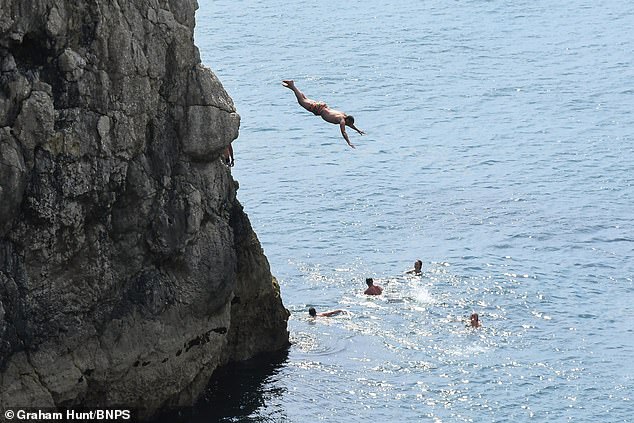 Dorset police previously described the danger posed by jumping from the cliff as ‘critical’. Pictured, a man leaps into the sea while other swimmers wait below 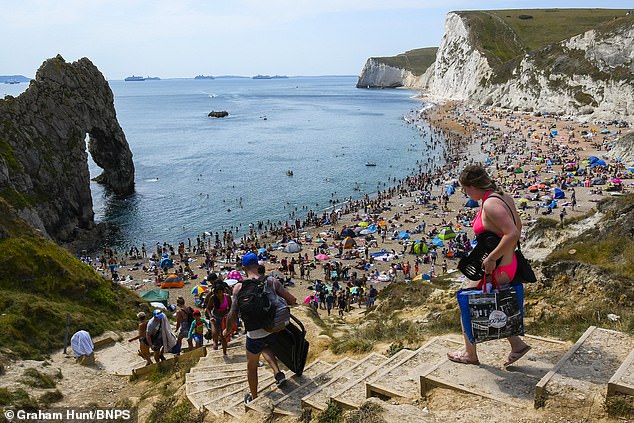 Ben Clark was at the beach at the time. He told The Sun: ‘The lad did not come back to the surface, he just never came back up.

‘He got CPR on the beach right in front of my eyes. Then a defibrillator was used.’

The man, in his 20s, was dragged out of the water when he failed to resurface following the jump.

An off-duty medical worker performed CPR before the air ambulance arrived to bring him to Southampton General Hospital.

Another man was sent via air ambulance into critical care for a serious spine injury and the third was taken to hospital in a land ambulance where he was treated for a broken leg. 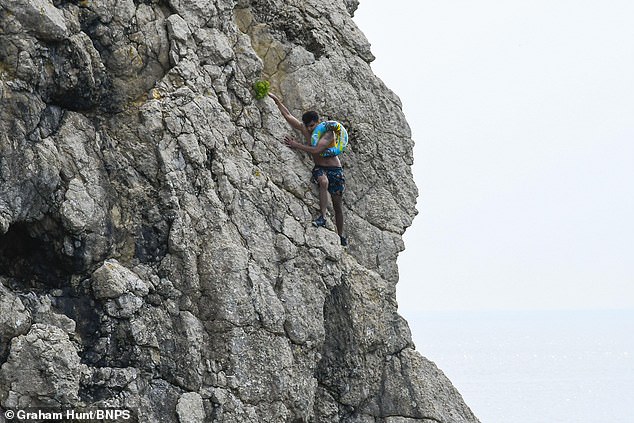 A man traversed the steep rock edge while holding onto an inflatable ring. He later leapt into the water below 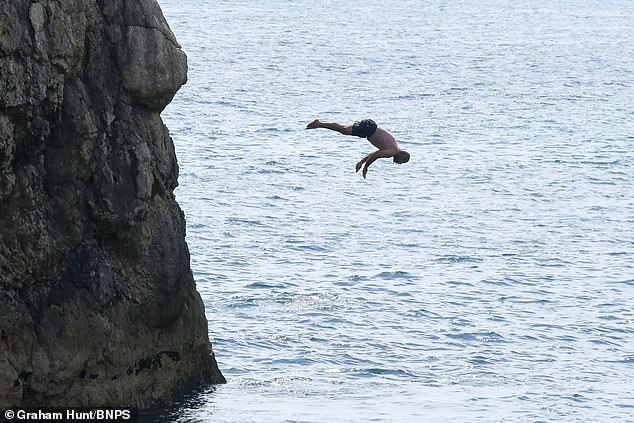 It comes just months after two men in their 20s were left with life-changing injuries and another broke his leg after jumping from the cliff. Pictured, one of the jumpers on Saturday

It comes as holidaymakers and sunseekers flocked to Durdle Door to cool off as temperatures soared across the country on Saturday.

Drivers reported 40-minute queues for car parks in Sandbanks, which filled up throughout the morning, as the mercury rose to 95F and the RAC prepared itself for the busiest weekend of the year.

Thanet District Council in Kent warned that high tides at its beaches in Broadstairs and Margate made social distancing ‘difficult’, and asked visitors to ‘consider all the places you could visit’ along its 19 miles of coastline, ‘or come back when it’s quieter’.

Much like yesterday, crowds appeared unbothered by fears of coronavirus as groups mixed without masks – despite rising cases in the UK driving fears of a second wave. 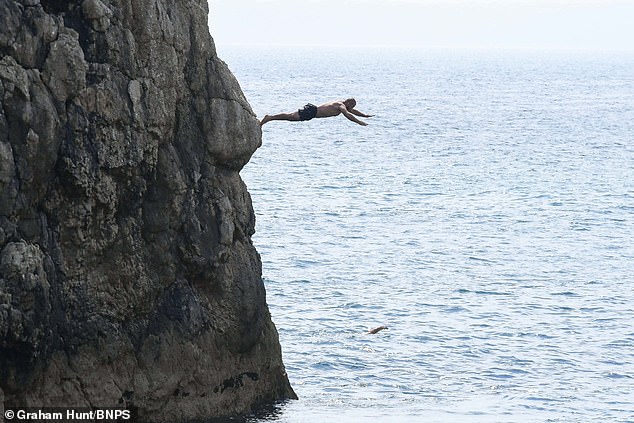 The chaos comes amid a plea for ‘bold’ young people to continue following social distancing rules as fears grow that they are catching the virus without knowing and passing it on to other members of their household.

The Met Office said temperatures had already reached 95F at Frittenden in Kent early on Saturday.

The day started with an ‘impressive’ 68F difference between parts of Scotland and south-east England, the Met Office pointed out.

Forecaster Marco Petagna earlier said a breeze along the North Sea coast would keep temperatures in the high teens there, while England and Wales would generally see the high 20Cs or low 30Cs – with cooler temperatures in Scotland and Northern Ireland.