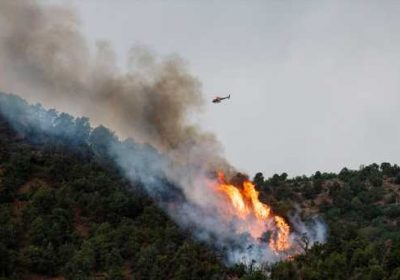 New wildfires in the west have made Denver’s air hazy to begin the week. There’s a new wildfire in Colorado, too, sparking Friday and already having burned over 3,000 acres. The fire season is expected to continue to be challenging, with experts already listing the preparedness level at a four, on a scale of one to five with rising intensity for each level.

Currently, 59 large fires have burned 863,976 acres across the country this year, according to the National Interagency Fire Center.

Here’s the latest on some of the fires burning in Colorado:

Sparking Friday 15 miles north of Steamboat Springs, this fire has already burned 3,414 acres. It is 0% contained with an unknown origin. The fire is fueled by heavy dead and down timber.

There’s a large area closed, impacting roads, trails, recreation sites, and a large section of the Continental Divide Trail. The fire is in the Mt. Zirkel Wilderness and began south of Hinman Campground, south of Seedhouse corridor, County Road 64 & Forest Road 400 located in Routt County. Forest Road 400 is closed between County Road 64  and where it enters the national forest. Forest Roads 440, 442, and their associated spur roads are also closed.

Routt County has issued a voluntary pre-evacuation notice for some area residents east of the fire.

There are 140 crew members working the blaze with the help of five helicopters.

Burning 20 miles south of Steamboat Springs, this blaze began June 20 and has been 50% contained. The Routt County fire is burning mostly timber. NIFC reports that structures and energy infrastructure are threatened, with 18 structures already lost.

“With hot, dry, and windy conditions, isolated areas of heat will likely have an increase in activity, hidden hot spots and smoke may materialize along uncontrolled fire line,” Sunday’s report read. “Since tree torching and short-range spotting (is) possible in heavy timber pockets, bucket drops will need to be used to allow ground forces into heavy dead and down and dense timber pockets.”

There are 259 people working the 4,093-acre fire, which has cost $9.3 million. Four crews, 18 engines and four helicopters are working on hitting the estimated goal of containment by the end of July. The cause of the fire is unknown.

Burning 15 miles south of Eagle, near Sylvan State Park, the fire has grown to 3,792 acres acres since it began on June 20. The fire is fueled by timber and brush with minimal behavior as of late. No structures have been lost.

There are 30 people working the fire, which has been 68% contained and has cost $6.9 million. Officials estimate the fire to be contained by Aug. 1. The cause of the fire is lightning.