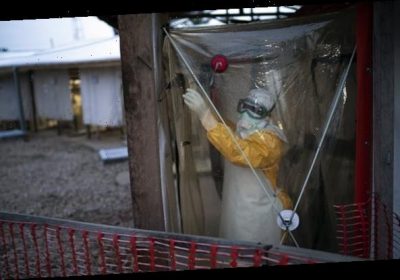 Congo has been hit with a new Ebola outbreak, the fourth in less than three years, after the country quashed the last wave in November.

Health officials in the Democratic Republic of Congo confirmed another Ebola outbreak in the country’s east on Sunday after a woman died in Butembo last week.

The new crisis comes just under three months after the country declared an end of its third Ebola outbreak that had killed 55 people since the first cases emerged in June last year.

The African country has also seen nearly 23,500 confirmed coronavirus infections and 679 deaths as of Sunday. 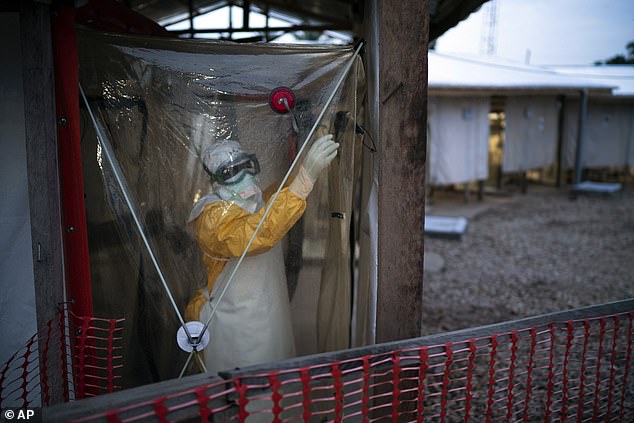 Health officials in the Democratic Republic of Congo confirmed another Ebola outbreak in the country’s east on Sunday. In this file photo taken on July 13, 2019, a health worker enters an isolation pod to treat an Ebola patient at a treatment centre in Beni, Congo DRC

On February 3, a woman died after feeling sick for a few days, Congo’s Minister of Health Eteni Longondo announced.

After being tested in a clinic, she then went to a hospital in Butembo, but died before receiving the results.

The government has begun tracing everyone who came in contact with her to try to ‘eradicate the epidemic as soon as possible,’ said Longondo.

This is the 12th outbreak in conflict-ridden Congo since the virus was first discovered in the country in 1976.

In June 2020, an outbreak broke out in the western province of Equateur, infecting at least 130 people before officially ending in November.

The 2018 outbreak in Eastern Congo was the second deadliest in the world, killing 2,299 people before it ended in June.

That outbreak lasted for nearly two years and was fought amid unprecedented challenges, including entrenched conflict between armed groups, the world’s largest measles epidemic, and the spread of COVID-19.

Health officials worry a new Ebola outbreak could badly affect the nation’s fragile health system, especially as it faces a resurgence of COVID-19.

‘While there is hope that this early identification of an infection may help with quickly containing this outbreak, back-to-back Ebola outbreaks and COVID-19 has stretched Congo’s health systems to the limit and this could put far greater strain on an already exasperated system,’ said Jason Kindrachuk, a disease expert from Canada’s University of Manitoba.

Kindrachuk is also conducting research on survivors from the 2014-2016 West Africa Ebola outbreak, the deadliest ever. 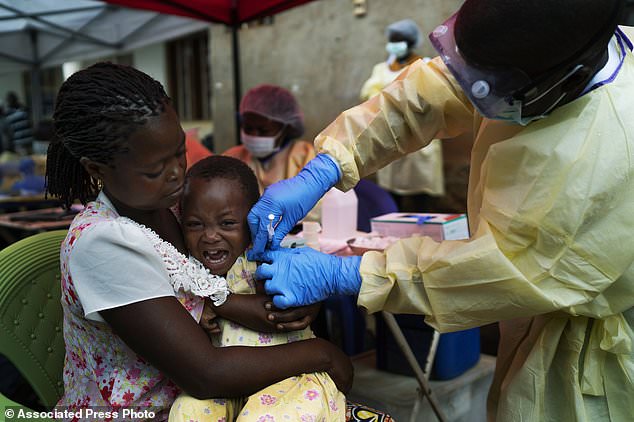 Congo has been hit with a new Ebola outbreak, the fourth in less than three years, after the country quashed the last wave in November.  A child is pictured being vaccinated against Ebola in Beni, Congo on July 13, 2019

The Ebola virus is highly contagious and can be contracted through bodily fluids such as vomit, blood, or semen.

While the source of contamination is still unknown, the woman who died was the wife of an Ebola survivor, according to the government.

The virus can live in the semen of male survivors for more than three years, according to a study in the New England Journal of Medicine, and health experts say as outbreaks become more frequent, it’s important to understand more about how Ebola is contracted.

In a statement on Sunday, the World Health Organization said it wasn’t unusual for sporadic cases to occur following a major outbreak and that previous Ebola responses were already making it easier to deal with this one.

‘The expertise and capacity of local health teams has been critical in detecting this new Ebola case and paving the way for a timely response,’ said Dr. Matshidiso Moeti, WHO regional director for Africa.

The WHO is investigating the case and trying to identify the strain of the virus to determine its link to the previous outbreak.

Congo has suffered more than a quarter-century of conflict and distrust of government health workers and other outsiders is high in eastern Congo.

Residents in Butembo are already asking why it took four days from the time the woman was tested to announce the results.

‘It’s frustrating because the contacts will have moved and it will be difficult to find them,’ Vianey Kasondoli, a Butembo resident, told The Associated Press by phone.

‘The government and the ministry of health have to contain the disease as soon as possible.’