THREE cops fired after a shocking racist rant about "slaughtering f***ing n*****s" have been named and pictured for the first time. 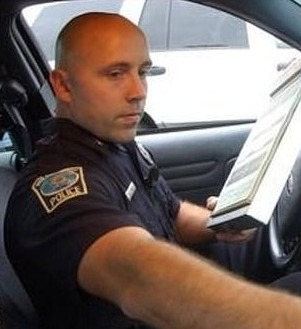 Moore referred to a black female as a "negro" and uses the N-word multiple times then says "she needed a bullet in her head right then."

They were also heavily critical of their black colleagues, including the new police chief, who is himself African American.

Piner complained in an apparent reference to his own department that its only concern was “kneeling down with the Black folks." 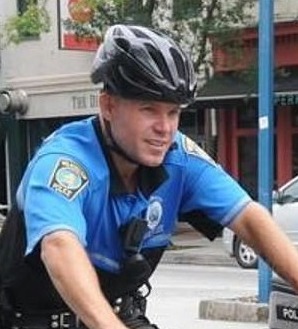 Gilmore said that white people were now "worshiping blacks" and said he had seen a video of a "fine looking white girl and this little punk pretty boy bowing down and kissing their toes."

There were a staggering 89 cases flagged for potential bias between the officers within just days of review by the DA.

The shocking footage was discovered June 4 by accident during a routine audit of the Wilmington force, and captured one officer saying he wanted to wipe Black people "off the f***ing map".

Wilmington PD Sgt. Heflin discovered during the June 4 audit that the dashcam on Officer Michael “Kevin” Piner’s car had been accidentally activated, and had captured conversations Piner had with Cpl. Jesse Moore and Officer James “Brian” Gilmore. 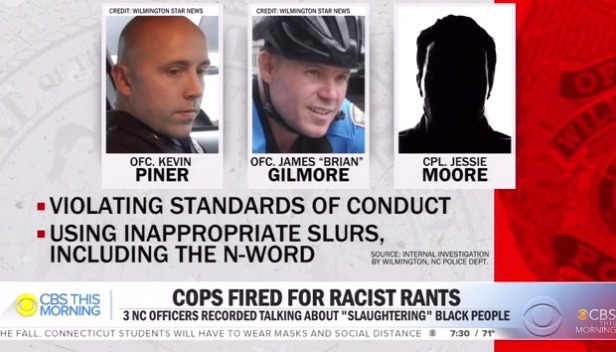 The officers denied being racist, but admitted it was their voices on the video, then blamed their comments on performing their job under "the stress of today's climate in law enforcement." referring to the George Floyd protests.

The shocking revelations came through police documents that were released earlier this week.

"Piner advised he is going to buy a new assault rifle in the next couple of weeks," police documents read.

"A short time later Officer Piner began to discuss society being close to ‘martial law’ and soon ‘we are just gonna go out and start slaughtering them f***ing [n-words]. I can’t wait. God, I can’t wait.’ Moore responded that he would not do that. Piner stated, ‘I am ready.'" 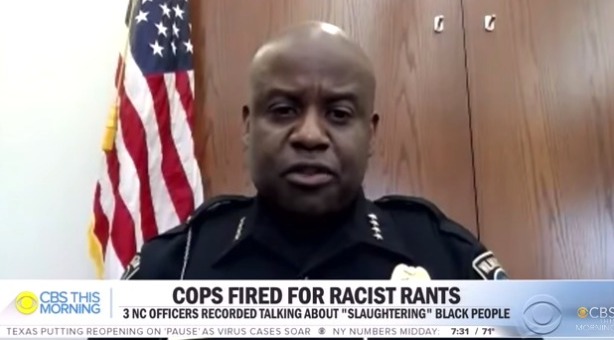 The police car's camera system was recording even though it had not been "activated" for an incident.

Heflin was skipping through the video, largely of the car's backseat, when she discovered the conversation.

As she reviewed the conversation she "heard comments, extremely racist comments made by both Piner and Moore,” according to a summary provided by police.

The video also recorded a conversation with Officer Gilmore who apparently had pulled up next to Piner’s car.

"Both conversations were explicit and racist in content," the document adds.

At one point, when discussing a Black female magistrate and a Black woman who had been recently arrested, Moore says: "She needed a bullet in her head right then and move on. Let’s move the body out of the way and keep going."

Wilmington's new police chief Donny Williams, who is Black, said he had no tolerance for the behavior exhibited by the police officers.

After insisting on firing them he told CBS: "People are tired of officers being involved in misconduct and walking away quietly."

"When I first learned of these conversations, I was shocked, saddened and disgusted.

"There is no place for this behavior in our agency or our city and it will not be tolerated."

Normally, Williams said, officers involved in misconduct cases are allowed to resign and "slip away quietly," and in some cases even maintain their certification and get another law enforcement job.

"I wanted to fire him to make sure that their chances of being rehired again were minimized," he said. 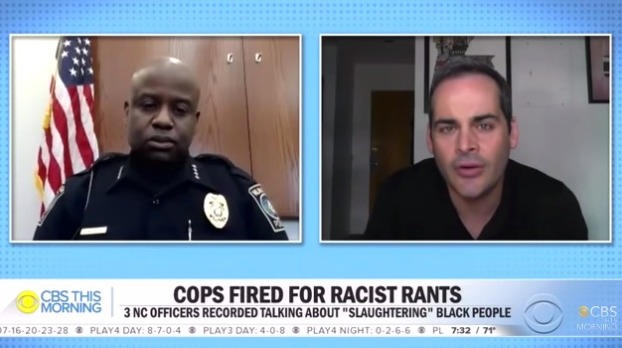 In another interview with Wilmington’s Port City Daily, he said: “This is the most exceptional and difficult case I have encountered in my career.

“We must establish new reforms for policing here at home and throughout this country.”

It was Williams' first day as Wilmington's first black police chief and he told a press conference: "Today is a challenging day for me because as your police chief, one of my first major tasks is to announce the termination of three veteran police officers."

Williams added: "The color of a person's skin is not going to determine the color of their heart.

The audio of the calls was released by the city, in an unusual move.

Public records laws usually prevent government agencies from handing out information on personnel, but in extraordinary circumstances, details can be released to the public, the local newspaper notes.

The former officers actively tried to prevent a release of the information, and an attorney had filed an apparently unsuccessful motion for a temporary restraining order.

"Why are we releasing this information this way and at this time?," Williams continued. "Because it is the right thing to do." 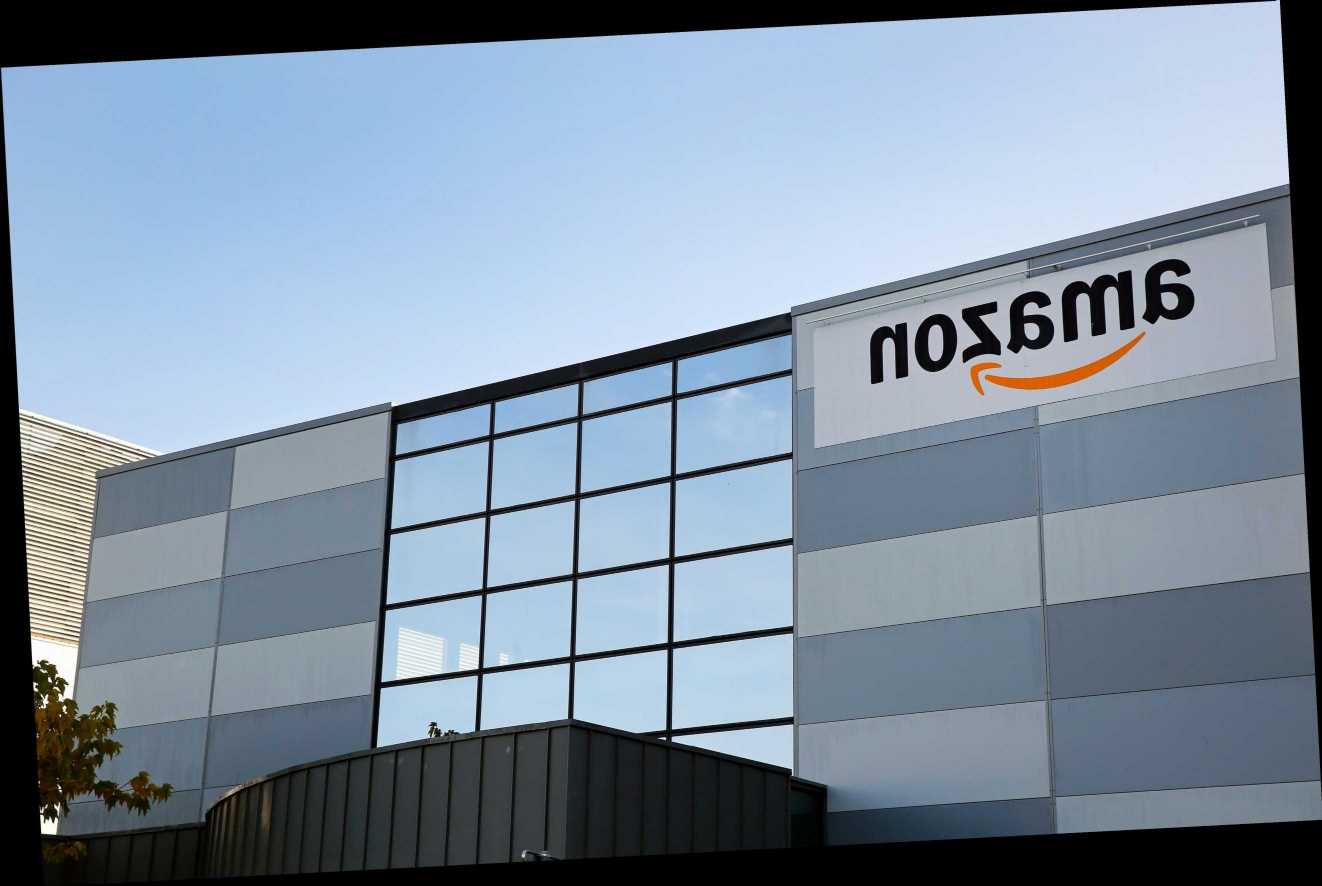