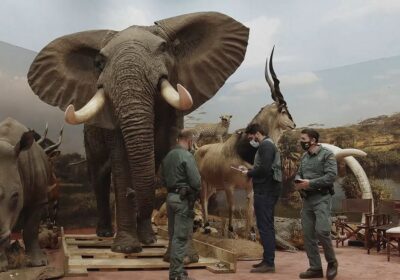 Spanish police have been investigating the owner of one of the biggest taxidermy collections in the world.

The man from Valencia owned a 50,000 square metre space and filled it with more than 1,000 “dissected specimens”.

According to local reports, around 400 of those were rare and even extinct animals, such as the Scimitar Oryx, while a nearly-extinct Bengal tiger was also found.

The full value of the haul is estimated to be worth more than £25 million.

A spokesman for the Spanish Civil Guard said: “We proceeded to investigate a person for the crimes of smuggling and another related to the protection of flora and fauna in the municipality of Bétera (Valencia).

“The operation carried out by the Nature Protection Team of the Valencia Civil Guard Command began last November, when the agents became aware of a possible private collection of specimens in the municipality of Bétera. .

“Continuing with the investigations, the agents located a space in said municipality of more than 50,000 square meters, which contained a house and two spaces inside, finding 1090 stuffed specimens inside.

“Among these specimens, different types of animals with various levels of protection were found, such as the cheetah, leopard, lion, lynx, polar bear, snow leopard, white rhinoceros

“Also, among the pieces found, 198 were large ivory tusks of elephants.

“In the next phase of the operation, the agents will proceed to analyze all the documentation provided by the owner to justify the possession of the aforementioned pieces.

“The inspectors and facultative technicians of the Technical Unit of the Headquarters of the Nature Protection Service and members of the Legal Institute and Forensic Sciences have collaborated in the operation, which thanks to the Integrated System of Management and Control of Quality and the Environment have been able to identify the protected species.”

No confirmation of the identity of the person who owned the collection has been given.