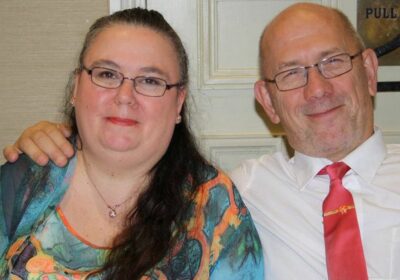 A couple have been left over £60 out of pocket after being forced to ditch almost a hundred Kinder Eggs bought for their Easter wedding because of a salmonella outbreak.

The chocolate eggs have been connected to more than 100 reported food poisoning cases.

Lisa Nash, 51, and partner Steve Lousvet, 56, are getting married this Saturday (April 16) and had planned to give all their guests a Kinder Surprise as a wedding treat.

The pair spent £66 purchasing 33 boxes from supermarkets for their Easter-themed wedding as a tribute to Steve's late mum who loved the chocolate eggs.

But Lisa and Steve have now been left with stacks of inedible chocolate after Ferrero has issued a product recall.

The couple have now demanded an apology from the company for the "distress" caused after their wedding plans were scuppered by the recall.

Lisa, from Droitwich on Worcestershire, says she’s “very stressed” by the need to rethink her plans.

She explains that the eggs represent a link to Steve’s late mum and that because she bought a few a week, often from different shops, it’s not as simple as just walking into a supermarket and returning them.

"The instruction from Kinder is to email them,” she says, “but then you don't get any response beyond the auto reply. So, I don't know what to do next.

"We can't use them at all. We're waiting to know what to do with them. There's no help from them. They're not giving much information at all"

"Its about the fact that this was done for a very specific reason," Lisa explains. "We have ways of representing family. Now that's gone. We've lost what represented his mum.

"We chose Kinder Surprise eggs as they fitted the Easter theme and because the groom's late mother loved them.

"When he was young, the price of entry to his house was a Kinder egg for his mum, so this was a way of paying tribute to her even though she cannot be there.

"It started as a joke with his friends, bringing her an egg to come to lunch, but it continued and brought her happiness in her final days, which is why its such a special memory for Steve."

The bouquets will feature daffodils to pay respects to Steve's Welsh dad and gran while guests will be invited to leave messages on a tree, representing Lisa's younger sister Theresa.

The couple are also asking guests to bring Easter eggs, which they plan to deliver to staff at Worcestershire Royal Hospital the following day.

This is because Lisa spent Easter 2020 at the hospital, as she battled with Covid for eight days.

She said: "Without them I wouldn't be getting married in a week.

"Two years of Covid, and they are still working so hard to keep us all alive and well.

"I want the doctors and nurses to know I haven't forgotten what they did for me two years ago and what they continue to do for us all still."