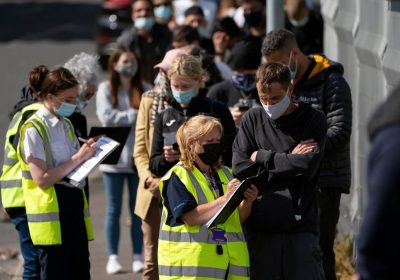 Almost 700,000 New Zealanders aged 60 and over haven’t had their first vaccine dose as the country prepares for the general public rollout in three weeks’ time.

Updated Ministry of Health data, analysed by the NZ Herald, reveals almost two-thirds (63 per cent) of older Kiwis haven’t received a vaccine and 78 per cent (867,577) have only had one jab.

People in the vaccine rollout’s third priority group, which included people over 65 and those with underlying health conditions, were told they could get vaccinated from May.

Last week, Covid-19 response minister Chris Hipkins said the Government could have made it more clear to those in group 3 that most of them wouldn’t get vaccinated until the second half of the year.

Many people over 65 years old have been frustrated at being unable to get vaccinated, while more than 50,000 people in group 4 – which included the general public – have been able to get their first jabs.

From July 28, people aged 60 and over could book their vaccination through the national “Book My Vaccine” system. It would be opened up to people 55 and over from August 11.

The ministry data also provided insight into vaccination progress across District Health Boards. Nelson Marlborough was leading the pack with almost 19 per cent of residents aged 15 and over having had two doses.

Whanganui, Lakes, South Canterbury and West Coast were close behind, with between 16-18 per cent fully vaccinated.

At the other end of the spectrum, Taranaki had the least number of people aged 15 and over fully vaccinated at 5.9 per cent. Capital & Coast, Canterbury and Waikato were all under 10 per cent.

In today’s media briefing, Hipkins said the Government would be talking with Canterbury DHB about concerns it would not be able to meet the general rollout targets.

He expected all DHBs to be working to a “nationally consistent plan” with reference to the vaccine rollout.

In total, more than 500,000 people had been fully vaccinated, in addition to the almost 270,000 people who had been jabbed once.

Also announced today was Medsafe’s provisional approval for the single-dose Janssen vaccine to be administered to people aged 18 and older.

“We purchased a portfolio of vaccine options to provide us with flexibility, and the approval of a second Covid-19 vaccine is welcome news.”

Hipkins said Cabinet would decide in August what the best use for the vaccines were.

“While our plan remains to ramp up the roll-out using the Pfizer vaccine from here, having the option of the Janssen vaccine increases our choices and provides us with flexibility if we need it.

“As a single-dose vaccine, it may be useful in hard-to-reach locations or emergencies, or for those who cannot get the Pfizer vaccine.”

It was also confirmed that all three contacts of the two Covid-infected mariners on a ship off the Taranaki coast were fully vaccinated and were now in MIQ.