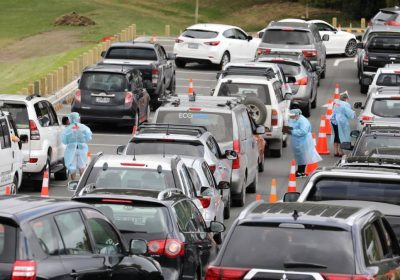 Auckland’s mayor is signalling major events may be canned to prevent a large scale outbreak, as people flock to testing stations, concerned they have been exposed to the contagious South African covid strain.

As the City of Sails gears up for one of the biggest weekends this year, the prospect of a community outbreak after two months looms large, with two new cases who completed their managed isolation in Auckland’s Pullman hotel at the same time as a Northland woman two weeks ago.

Covid Response Minister Chris Hipkins this morning revealed a child and adult from the same family were the latest to succumb to a highly contagious covid variant, becoming the second and third official cases connected to the latest Northland community outbreak.

It makes them the second set of returnees to walk out of managed isolation at the five-star hotel with an undetected infection in the past fortnight after the 56-year-old Northlander tested positive for Covid nine days after leaving managed isolation on January 13.

The latest community cases were detected when health authorities asked all 354 people who had stayed in the facility between January 9-24 to get retested.

While health authorities impose a raft of restrictions on the hotel, including keeping the present contingent of returnees in the premises until they know how the infection spread, the city’s mayor Phil Goff said Aucklanders needed to be on alert.

While there was no widespread evidence of community transmission the system needed to err on the side of caution and “if necessary we may need to close down events”.

“At this stage it’s not deemed necessary according to the health authorities and it’s important that we follow that expert advice,” he said.

While he hoped it wouldn’t amount to anything greater, he urged people to be extra vigilant.

Auckland is gearing up for a big three-day holiday weekend, with the semi-finals of the Prada Cup, Seeport Concert and Fireworks, and the annual anniversary day regatta.

“We’ve had two months with no community transmission but the system isn’t failsafe. This is further evidence of that,” said Goff.

More testing stations had been set up overnight, staff had been drafted in and hours had been extended, he said.

“I do urge health authorities to make sure the resources are in place. We don’t want to see the sort of situation that existed for a short period in the north where people had to wait hours for testing,” he said.

Big queues were quickly forming at Covid testing centres as worried Aucklanders who had been at any one of the dozen restaurants, supermarkets, shops and petrol stations visited by members of the infected family sought tests.

One man who had moved 200m in 90 minutes at an Orewa pop-up station described the situation as deteriorating the longer people waited.

This morning Hipkins said while it was unlikely there would be a change in alert levels “everything is always under review”.

He said genome testing had shown the pair were linked to the first infection at the Pullman Hotel.

That meant they had potentially come into contact with the returnee with the South African strain while staying in quarantine.

There were currently six close contacts associated with the family bubble that were initially isolating in their Orewa home.

All had returned negative tests.

The infected pair had since transferred to Auckland’s Jet Park quarantine facility. Last night they were described as asymptomatic.

Extensive testing was now under way for all returnees that had left the Pullman. Around 300 people had already tested negative. Another 54 people were still to be tested.

“There does appear to be something at the Pullman Hotel and we’re looking very closely to identify what it was there,” said Hipkins.

“The Pullman hotel will empty out a little bit. We’re not letting anyone leave the Pullman hotel at this point until we’re absolutely certain we’ve contained whatever the risk is.”

The Director-General of Health Dr Ashley Bloomfield said a number of measures were being imposed as a result of the infection breach.

It included a deep clean of commonly used areas, tighter restrictions on movement of returnees including no arrivals or departures from the facility, and increasing hotel ventilation.

The Ministry of Health was also requesting returnees who had recently left, to not fly, to stay home and have an additional test within 48 hours.

Staff posted at the facility were being restricted from working at other sites.

Further north, the self-appointed Tai Tokerau Border control team was setting up at Waiomio on SH1, just south of Kawakawa.

Checkpoints were also being set up in Kaikohe and Dargaville.