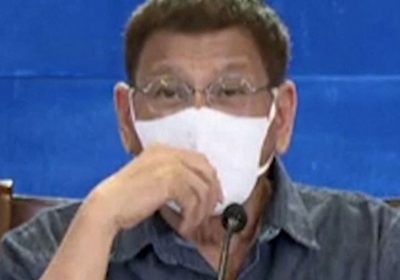 Filipino president Rodrigo Duterte has threatened to jail people if they refuse to get vaccinated against coronavirus.

Mr Duterte, 76, said those who refuse to get a COVID-19 vaccine would be arrested or face deportation during a televised address on Monday.

“You choose, get vaccinated or I will have you jailed,” he said.

“I’m telling you those police jails are filthy and foul-smelling and police are slow to clean them. That is where you’ll be.”

He continued by describing the Philippines’ COVID epidemic as a “crisis” and “national emergency”.

“If you will not agree to be vaccinated, leave the Philippines. Go to India if you want or somewhere, to America,” he added.

The Philippines has vaccinated just 1.99% of its population so far. Human rights lawyer Edre Olalia expressed concerns that Duterte could not arrest people who have not committed a crime.

In the UK, the Department of Health is making coronavirus vaccines compulsory for care workers who work with vulnerable and elderly people.

Under plans being drawn up by the government, staff will have 16 weeks to get both doses of a vaccine, according to reports, with similar proposals being considered for NHS workers.

Commentators have largely described the idea of compulsory vaccinations for entry to restaurants, bars or large events as unethical. But the government has said the use of vaccine passports to travel to some foreign countries is inevitable.

The Philippines recorded a further 5,224 cases in the latest 24-hour period, with 1.364 million infections reported in total so far.

Its daily COVID death figures are much higher than the UK’s – with 128 logged in the past 24 hours.