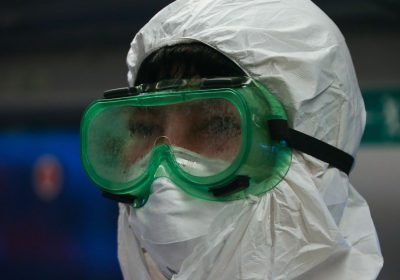 Three times a day the doorbell would ring.

Three times a day I’d open it and catch a glimpse of a worker in full hazmat suit scurrying away in terror as quickly as they could, a tepid meal left on the side.

It was the most exciting part of my day because, in hotel quarantine, there is very, very little to see or do.

Live COVID updates from UK and around world

We are all used to isolation now but under UK rules, you can at least leave the house for exercise or essential shopping.

For two weeks, though, I was confined to a single room in Dalian, northeast China.

The hotel had seen better days and the room was about 30 square metres, with a bed, a desk, a TV, an armchair, and a small ensuite bathroom.

I became intimately familiar with every nook and cranny: the stains on the wall in which, if you looked at them long enough, you could start to see patterns, just like cloud watching; the appalling discovery of human hair on the carpet when I did my first press-up. 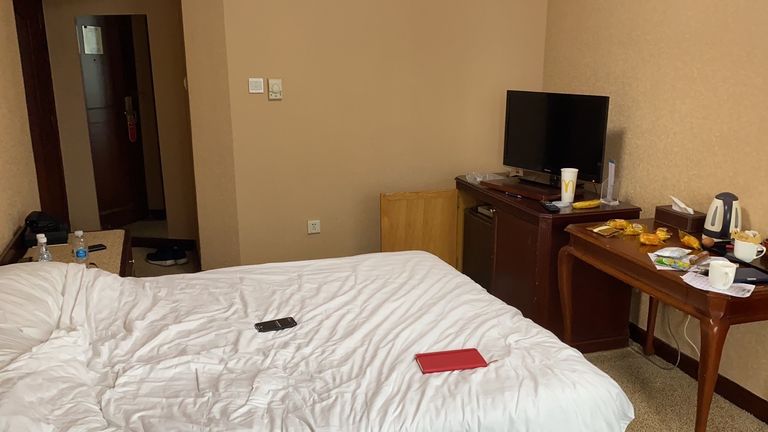 This was back in March last year, when China had already imposed its quarantine system and was about to close its border to foreigners.

Our team was returning to China from South Korea and the system was intended to be watertight – as virus-proof as possible.

The flight attendants wore full PPE and they took our temperature several times during the flight. On arrival, we were tested for COVID.

Our bags were disinfected and we were put onto buses, with the driver’s compartment sealed off.

After an hour’s drive, we arrived at the hotel. All the staff were again in hazmat suits as they checked us in.

Then they handed us our room cards and we let ourselves into our homes for the next fortnight.

To begin with, it was almost exciting: very few had been through a hotel quarantine at that point. The first evening was spent Zooming friends and family back in the UK, with my duty-free drinks (it was a Friday night after all).

Unfortunately I was overserved. I learned the next day that hangovers are particularly bad when you’re effectively imprisoned, so I took things easier from then on.

The first week was productive. Work kept me busy, going live on Sky News thanks to the magic of smartphones and Bluetooth microphones, editing a film about our return to China and the measures it was taking, and interviewing scientific experts for a long read article on what Asian countries got right about containing COVID.

I exercised in the morning and in the afternoon, either yoga or a high intensity workout following an app, and finally mastered headstands.

Meals were of dubious quality but at least regular.

Every other day, I’d wash my shirts and underwear in the bathroom basin. And evenings were spent calling friends, reading on my Kindle or watching box sets.

The routine helped and the time passed.

On day nine, things started to crack, though. I had already spent a long time by myself, inside the same four walls, and there was still five days to go.

I started pacing the room, muttering. I constructed the figure of a man out of the processed sausages I had been avoiding at breakfast and propped him up on my desk. Later I ate him.

A final COVID test the day before gave us the all-clear and we were allowed out.

The walk to the bus was beautiful: the air fresh, the sky indescribably bright.