Covid cases in England rise by 10% in a week with 160,000 people now infected – but ONS says data shows the outbreak is ‘level’ and has barely changed since mid-March

England’s coronavirus cases have risen by 10 per cent in a week, official figures revealed today, but experts said this was nothing to worry about because infections are still ‘level’ and have barely changed since mid-March.

The Office for National Statistics estimated 160,000 people were infected with the virus across the nation in the week ending April 3. For comparison, there were thought to be 140,000 cases in the previous seven-day spell.

Cases crept up slightly among 17 to 24-year-olds and 35 to 50-year-olds, and only fell in young children aged 2 to 11 years. But they remained lowest among the over-70s, who have been offered at least one dose of the vaccine.

This was at a similar level to the rest of March, where cases have remained around 160,000, and to those predicted in late September before the second wave spiralled out of control.

It comes after a tranche of figures yesterday suggested Covid cases were still in retreat across England, with the number of infections shrinking in all age groups and every region. Only Darlington saw a slight rise.

And the symptom-tracking app run by King’s College London experts estimated Covid cases had halved in a week across the country, with around 1,500 people falling ill every day.

Pubs and restaurants are set to reopen for outdoor service in England on Monday, with shops and hairdressers also again set to be allowed to welcome customers.

But the next shutdown easing is six weeks away, with foreign holidays not set to be permitted until May 17. The earliest date all restrictions could go under Boris’ plan – except masks and social distancing – is June 21. 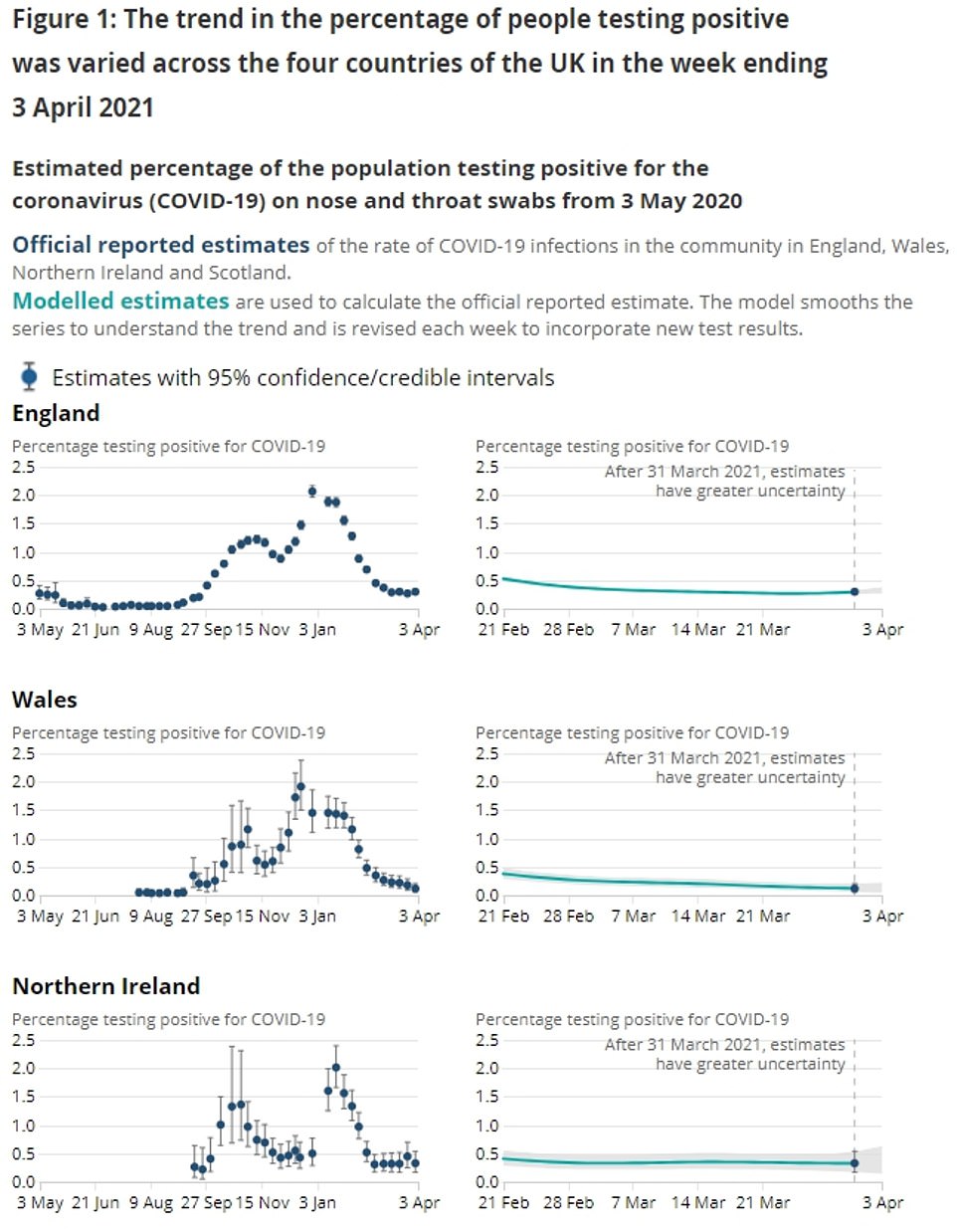 England’s Covid cases have risen by 10 per cent in a week, Office for National Statistics figures estimated today. But experts said this was nothing to worry about because they were still at mid-March levels

Cases rose among older children aged 17 to 24 years and 35 to 59-year-olds. They remained lowest among the over-70s who have all been offered at least one dose of the Covid vaccine 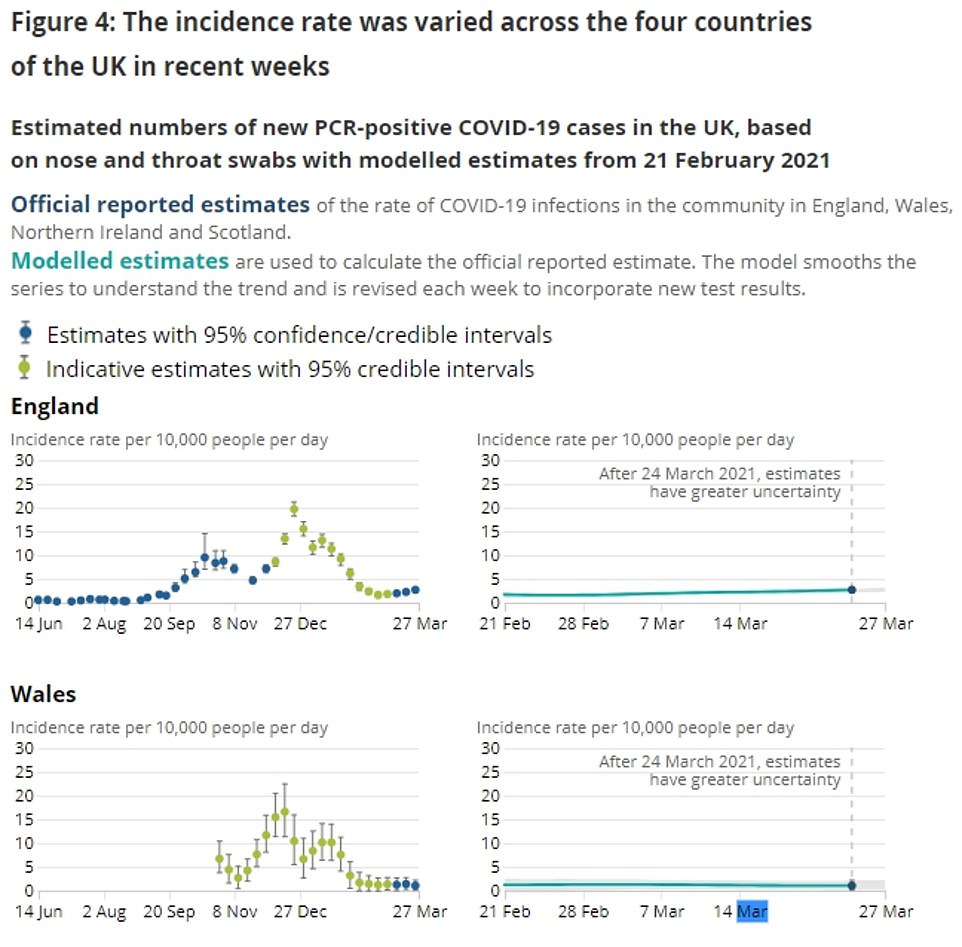 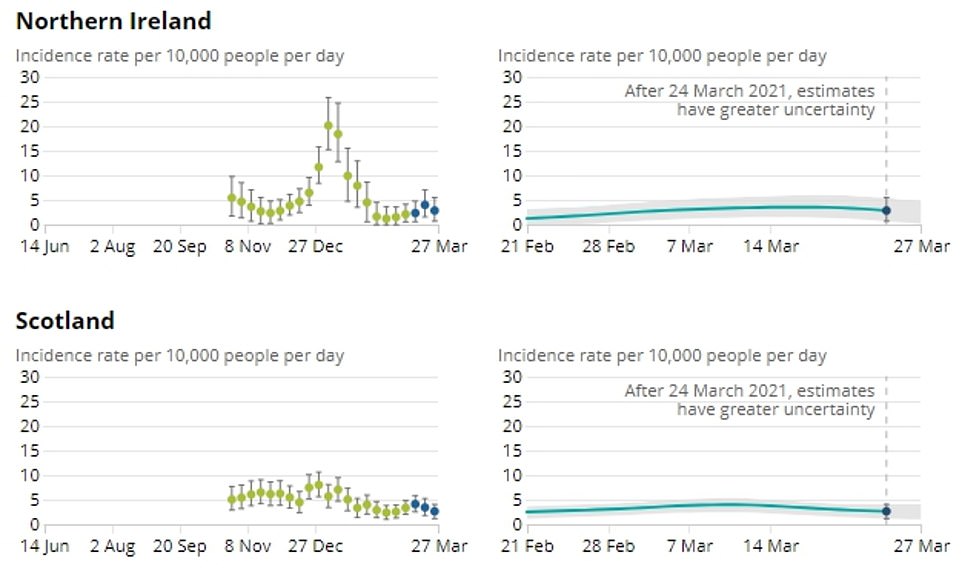 Covid cases rose in England last week, official data revealed today. But they remained around the levels seen in March and still appeared to be flatlining 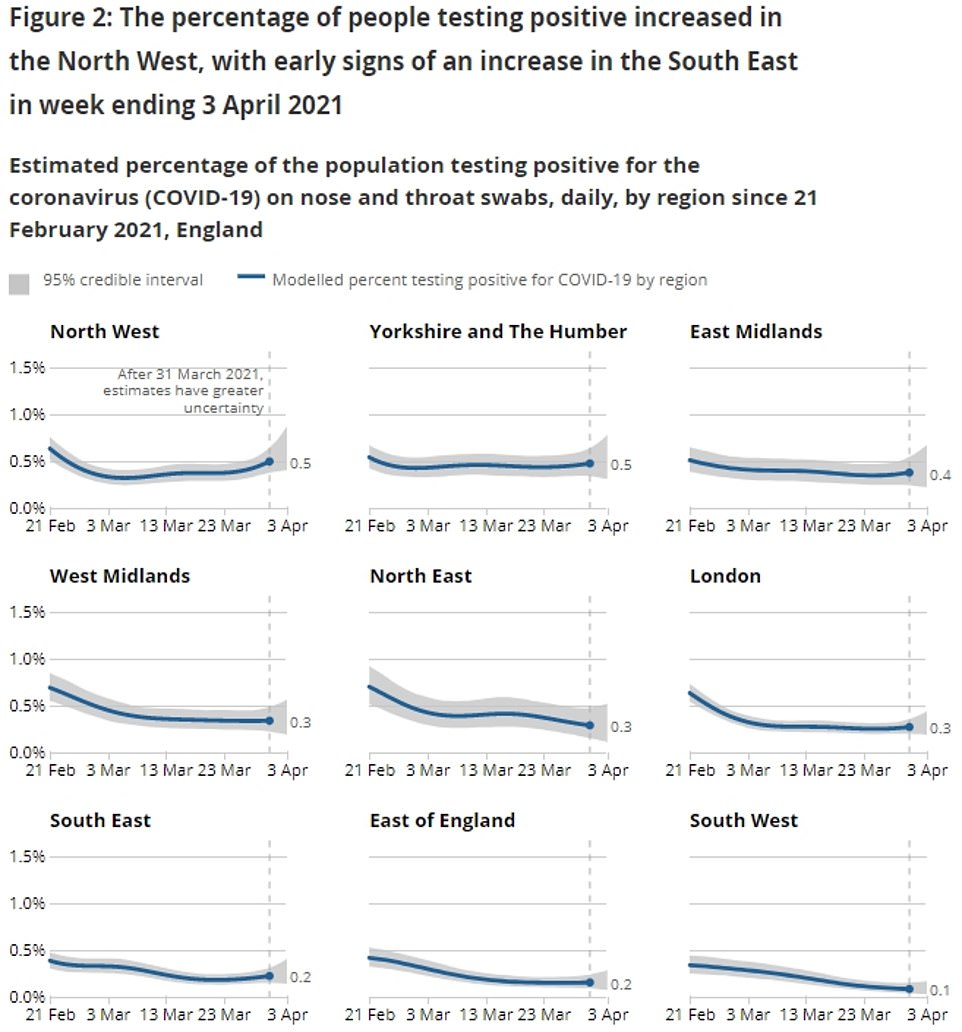 Cases also apeared to be rising in the North West, Yorkshire and the Humber, and East Midlands. They only appeared to fall in the South West of England.

The ONS infection survey is seen as the gold-standard for monitoring the spread of the virus by ministers because it relies on random swabbing of more than 100,000 people across the country.

This means it can detect asymptomatic cases – which trigger no symptoms and are thought to make up a third of infections – and reach those who don’t want to get a test for fear of having to self-isolate.