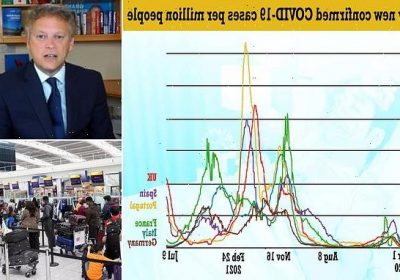 Covid cases are soaring in Spain and Portugal now the Delta variant has taken hold, just as millions of Brits prepare for their holidays after July 19.

Double-jabbed Britons will now be able to travel to amber list countries — which currently include the two nations on the Iberian peninsula — without isolating on return from Freedom Day in just over a week, Transport Secretary Grant Shapps announced yesterday.

Under the new rules, vaccinated travellers to green and amber list destinations only need to pay for a lateral flow test before travelling home and a PCR test on or before day two of return. Children aged five and over will also need to be tested.

But Spain and Portugal are both experiencing a surge in cases not far behind the UK’s, which recorded 35,707 positive tests yesterday, with the average number of cases now starting to rival levels seen in January.

Malta, one of the most popular tourist destinations for Brits this summer thanks to its place on the green list, has now announced it is banning all visitors from entering the country unless they are double jabbed from next Wednesday.

There has been a spike in infections on the island which the medical association is partly blaming on Malta’s place on the green list, which meant travellers were not required to isolate on return, regardless of vaccinations status.

Experts yesterday said the outbreak in England — which makes up the majority of cases spotted in the UK — may begin to shrink following Euro 2020, with top researchers blaming the football tournament for driving a ferocious surge in infections.

Professor Paul Hunter, an infectious disease specialist at the University of East Anglia, believes the country is likely to see a slow down in cases once the tournament ends after England’s final against Italy on Sunday night — as was the case in Scotland after they were knocked out. 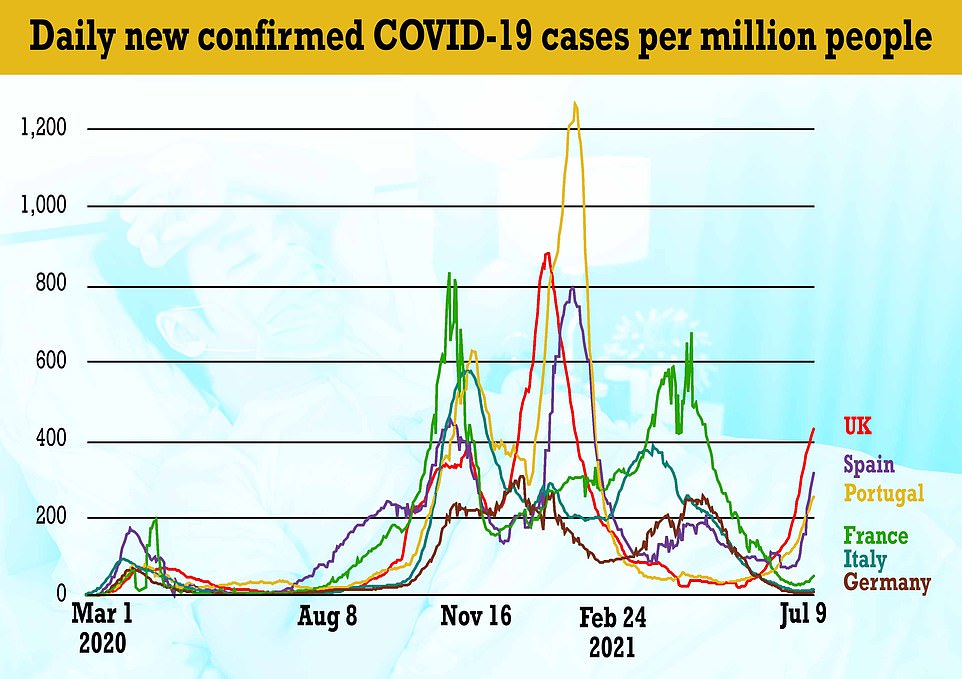 Covid cases have soared in Spain and Portugal after the Delta variant took hold, just as millions of Brits prepare for their holidays after July 19 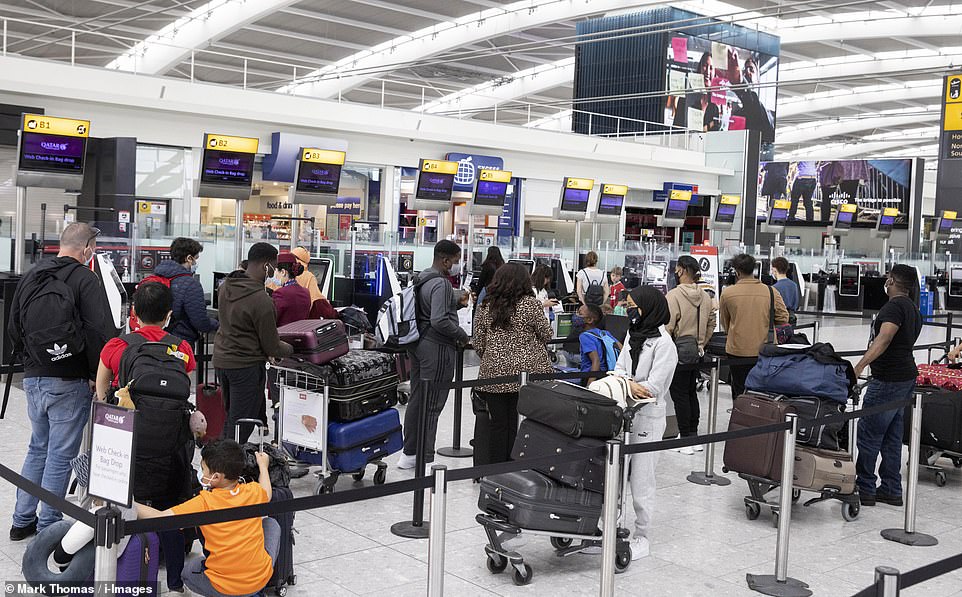 Millions of Britos are planning their holidays on the continent after it was announced yesterday double-jabbed adults will now be able to travel to amber list countries without isolating on return from Freedom Day on July 19. Pictured: Heathrow Terminal Five’s departures 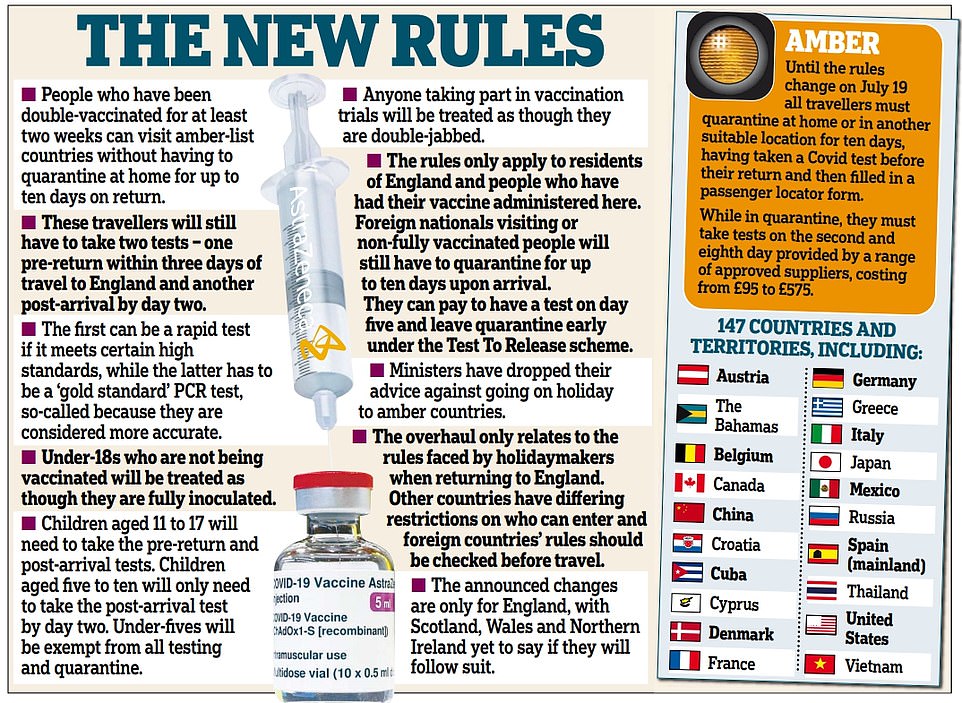 Announcing the move in the Commons, Mr Shapps confirmed that from the so-called ‘Freedom Day’, double-jabbed people can visit amber-list destinations without having to quarantine on their return

Malta’s Deputy Prime Minister and Health Minister Chris Fearne told BBC Radio 4’s Today programme: ‘What we are doing now is we’re looking at the data since we opened up for tourism a few weeks ago.

‘And what it is suggesting to us is that there is a way that we can make travel safe.

‘Basically you just need two criteria. The first is that the destination you are going to needs to have a high proportion of people who are fully vaccinated.

‘The second is that you only need to allow people who are fully vaccinated into that destination.

‘Malta has over 80 per cent of the adult population who are fully vaccinated, so it makes us one of the highest — probably the highest — tourism destinations with the highest number of vaccinations.

‘In other words, it is safe for you, if you are vaccinated, to come to Malta. And that’s what will happen from next Wednesday.’ 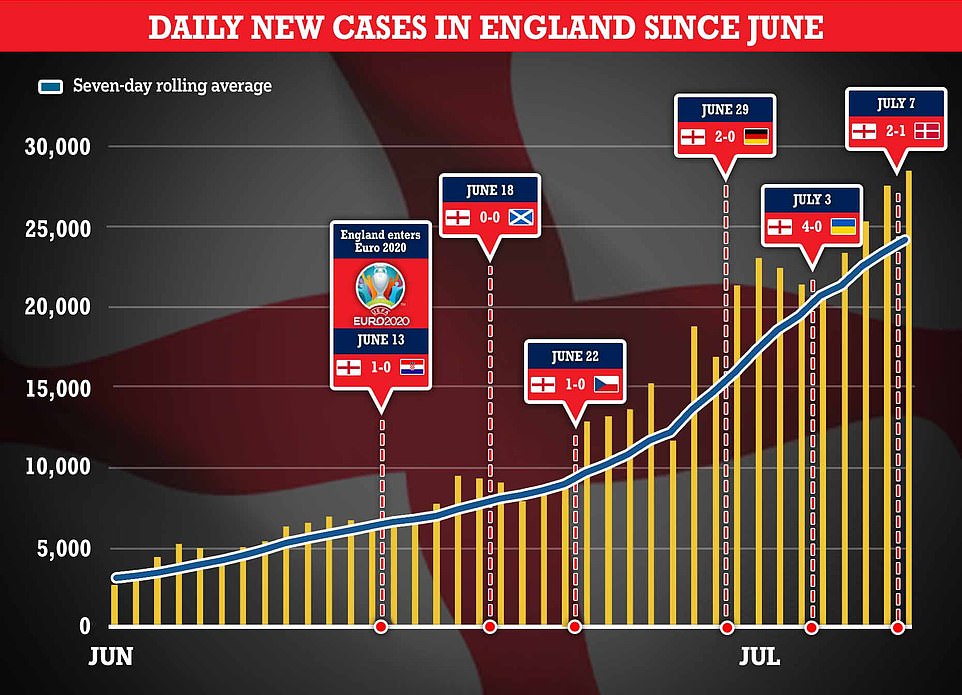 Experts yesterday said the outbreak in England — which makes up the majority of cases spotted in the UK — may begin to shrink following Euro 2020, with top researchers blaming the football tournament for driving a ferocious surge in infections 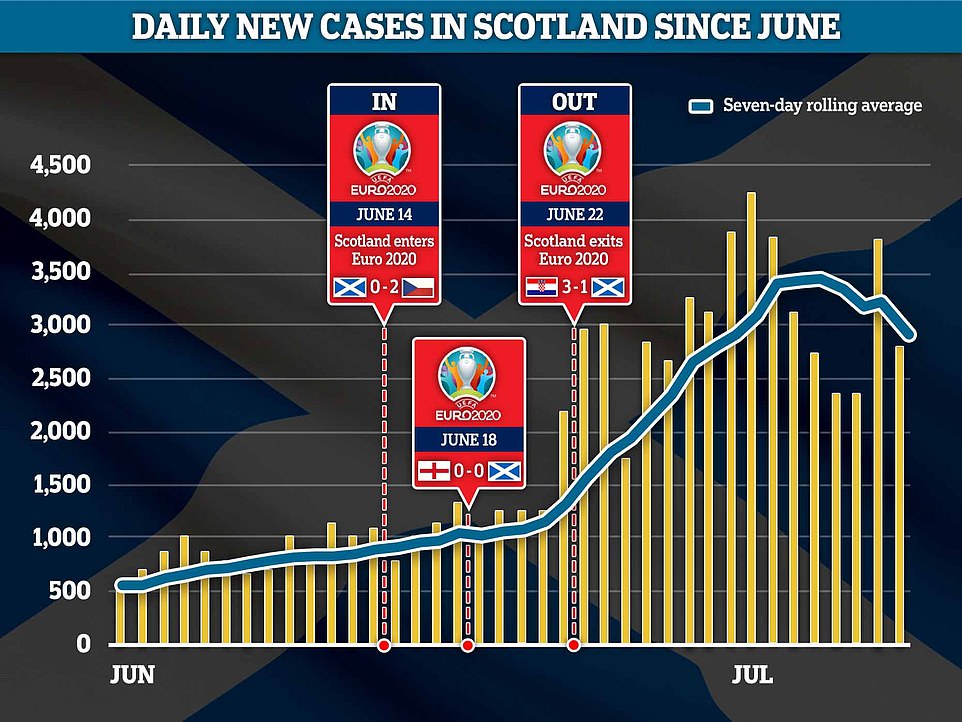 Professor Paul Hunter, an infectious disease specialist at the University of East Anglia, believes the country is likely to see a slow down in cases once the tournament ends after England’s final against Italy on Sunday night — as was the case in Scotland after they were knocked out 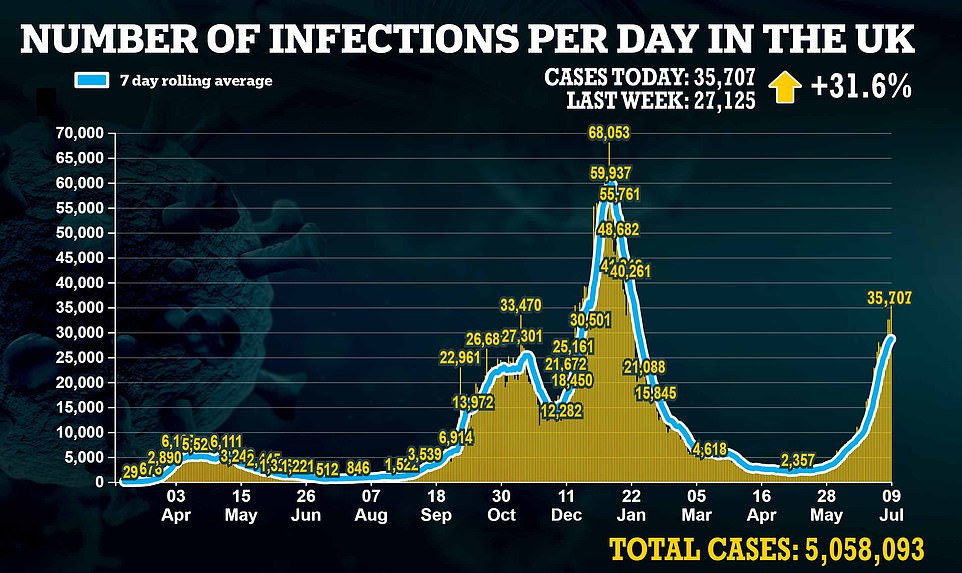 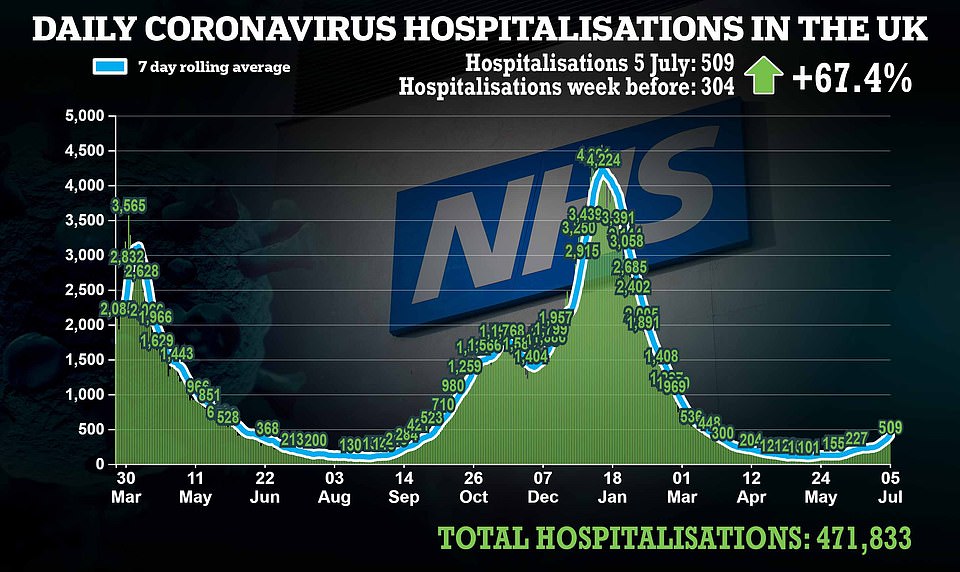 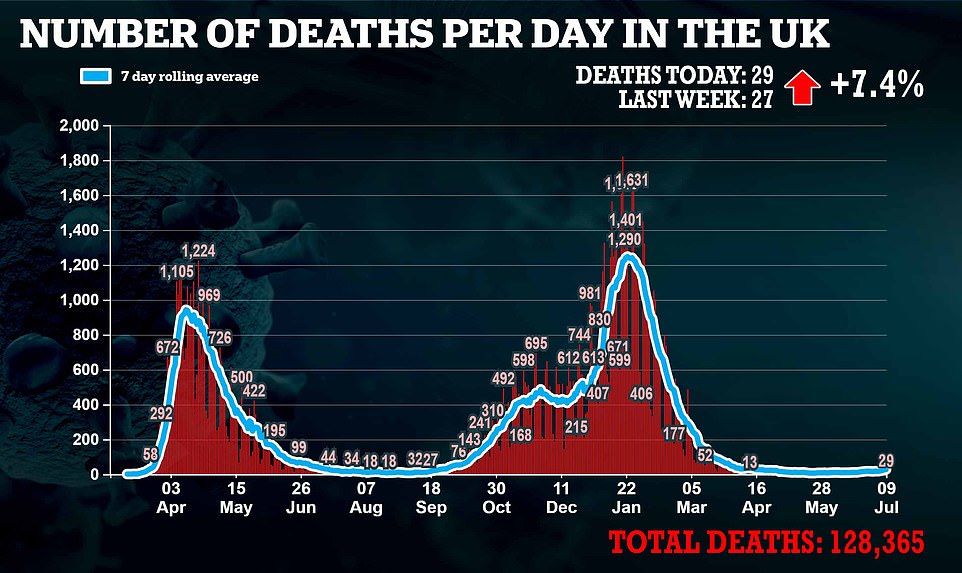 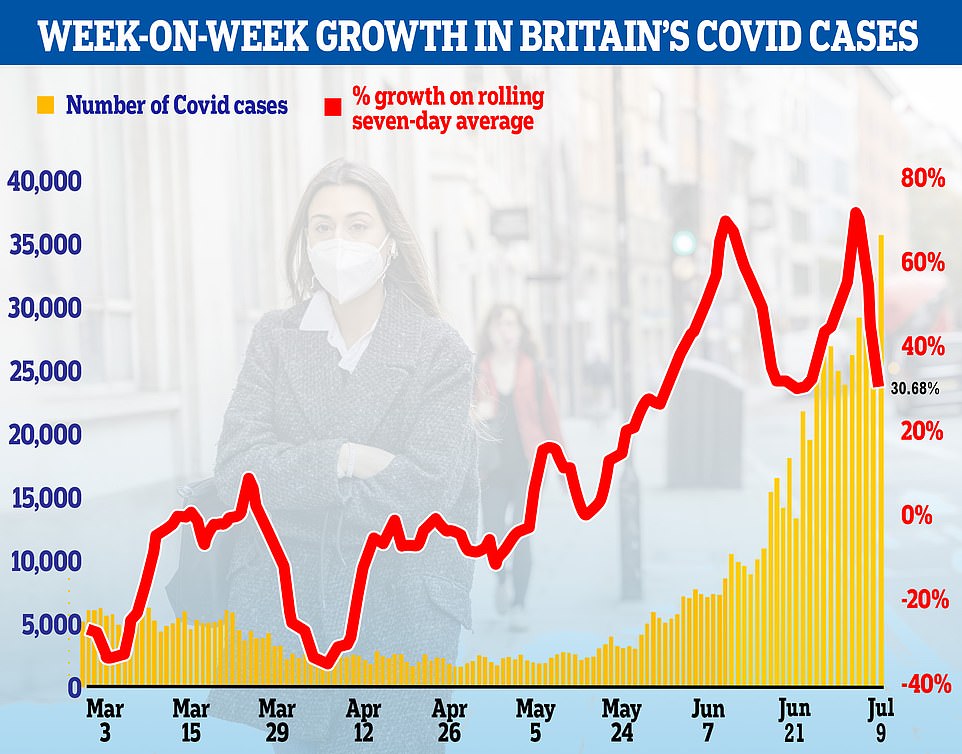 Although the country’s outbreak is still getting bigger, there are signs it may be slowing down. MailOnline analysis shows the rise in the seven-day average number of cases has fallen every day this week, with today’s count just 30.7 per cent up on last Friday’s. For comparison, this time a week ago the speed of growth was 74.21 per cent 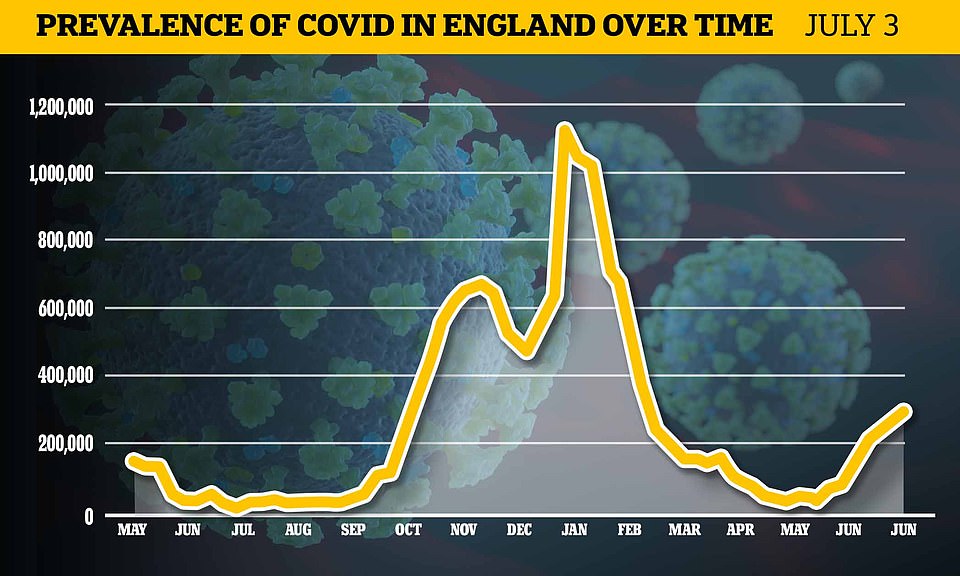 Office for National Statistics (ONS) data shows around 330,000 were infected with coronavirus on any given day last week 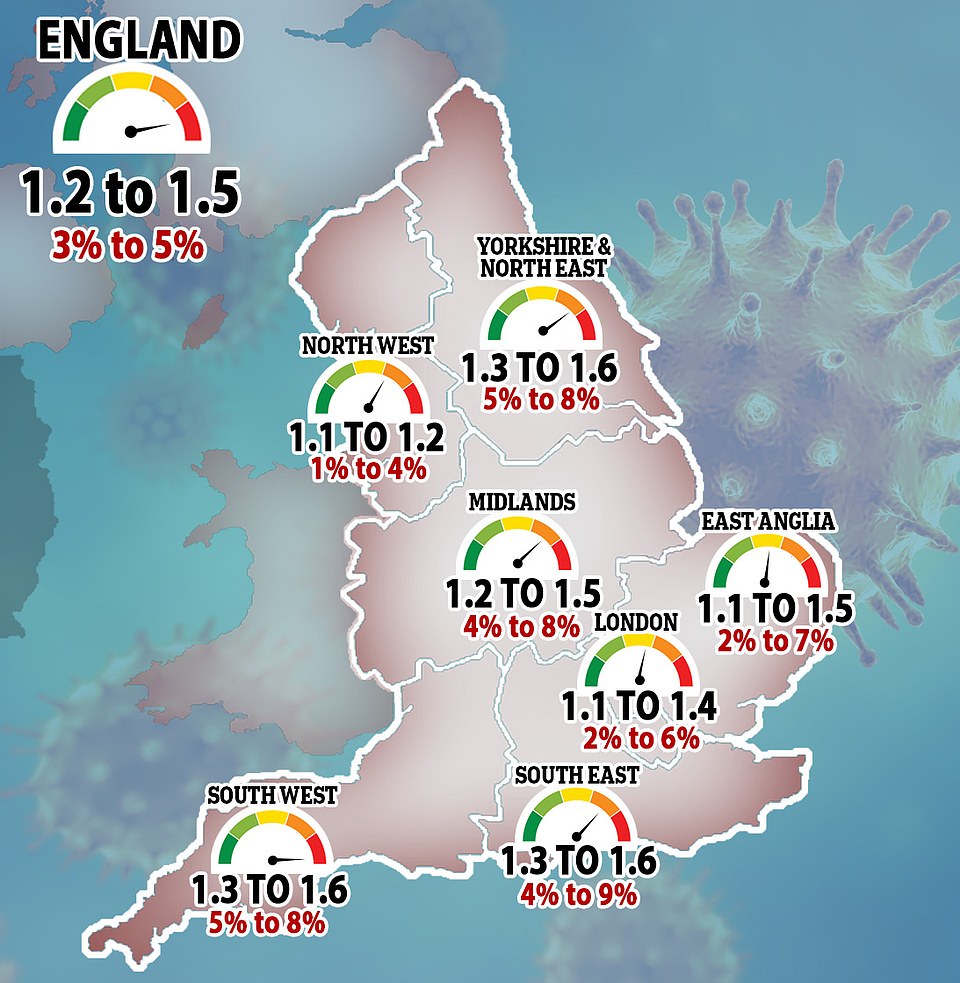 England’s Covid R rate may now be as high as 1.5 — the highest it has been since the second wave spiralled out of control in October, Government scientists have announced 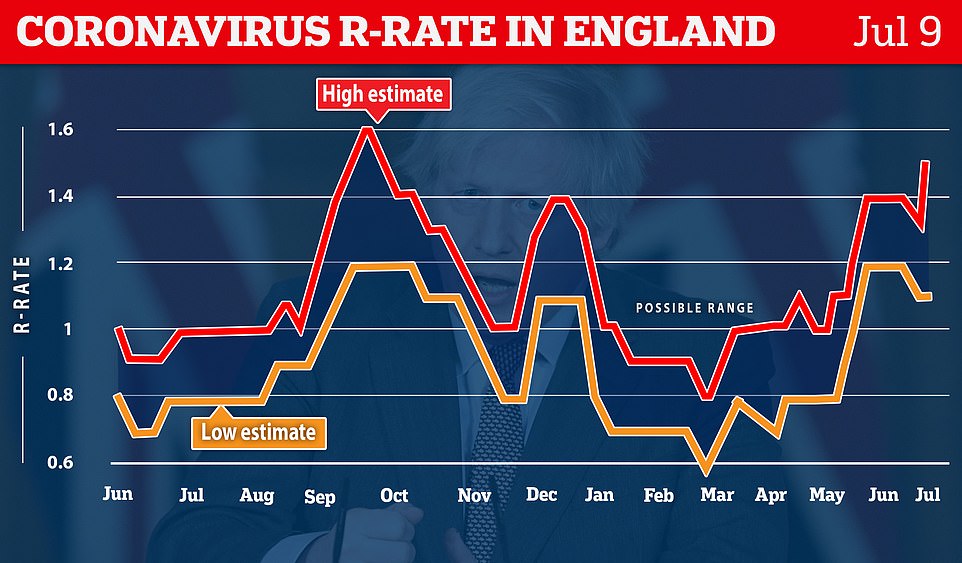 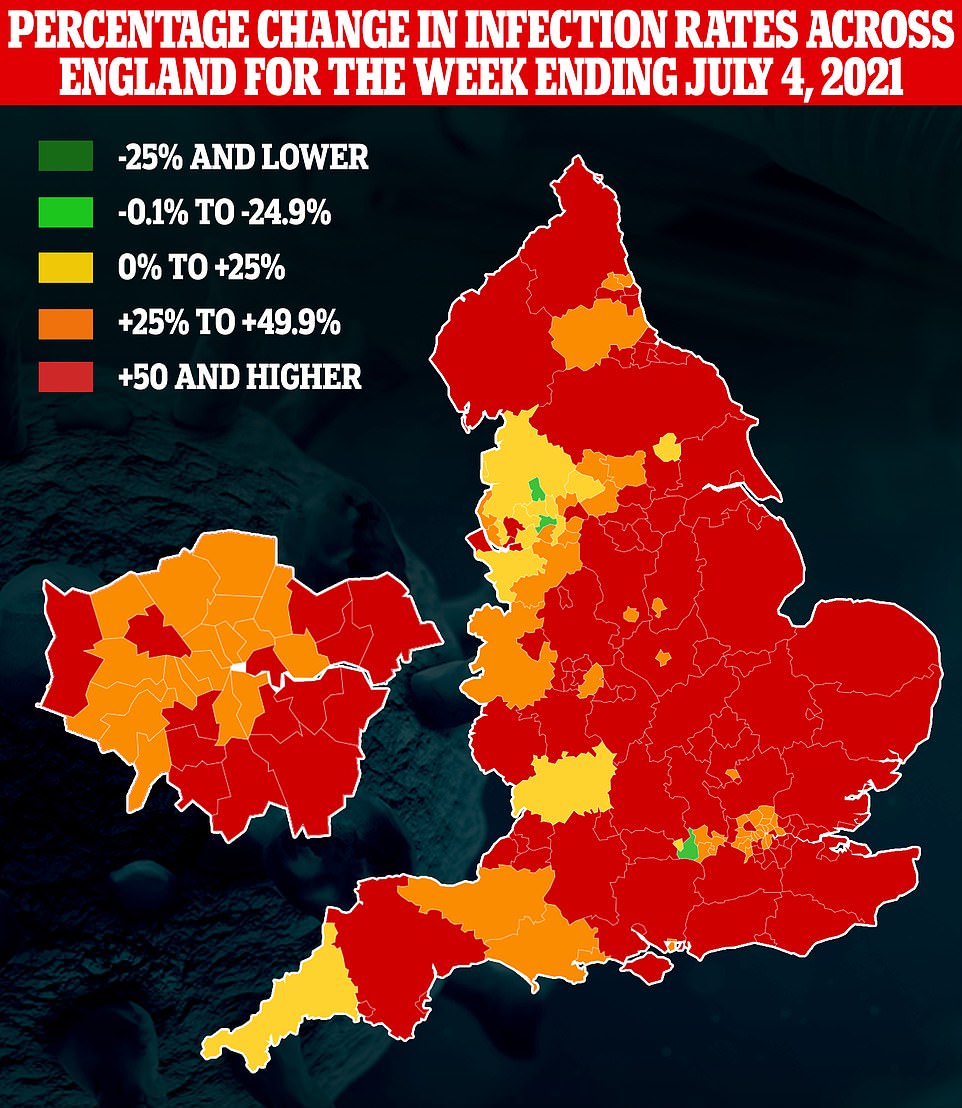 PHE’s weekly update also revealed that every local authority in England saw a rise in Covid infections last week except three, as the third wave of infections continues to surge. The three areas where infections dropped were Blackburn with Darwen, where there is a suggestion the outbreak may have already peaked after it was hit hard by the Indian variant, Wokingham and Salford

What restrictions do other countries have on Britons visiting?

Travellers who can prove they are fully vaccinated do not need an essential reason to travel to France and do not need to self-isolate on arrival.

Britons aged 12 or over must have either proof of a negative test 48 hours prior to arrival, or proof of being fully vaccinated at least 14 days beforehand.

Anyone aged six or over who has been in the UK in the previous 14 days must present a negative test result from the past 48 hours.

They must also self-isolate for five days and take another test at the end of the period.

Those arriving without a negative test will need to self-isolate for 10 days and then have a test.

Travellers from the UK can avoid quarantine requirements if they have proof of a negative PCR test up to 72 hours before arrival, a rapid antigen test within 48 hours, or that they have received two vaccine jabs at least 14 days earlier.

It is also acceptable to show evidence of having recovered from coronavirus – such as a positive test from months earlier.

All travellers, apart from children under 12, must have proof of a negative COVID-19 test to travel to or through mainland Portugal.

If you have travelled from the UK to mainland Portugal, you must quarantine for 14 days in the place you are staying.

But this requirement is waived if people can show they are fully vaccinated, and children travelling with a vaccinated adult are exempt from quarantine.

In Madeira and Porto Santo tests are not required for people who are fully vaccinated.

Fully vaccinated Britons are exempt from quarantine, but must do a pre-departure digital registration.

Unvaccinated children under 12 years of age are allowed to enter Germany if they present proof of a negative test result and travel with at least one fully vaccinated parent.

Since 16 March 2020, it is not possible for most British nationals to enter the US if they have been in the UK, Ireland, Schengen zone, Iran, Brazil, or China within the previous 14 days.

Juan Pablo Horcajada, who coordinates all the Covid activity in Barcelona, said ‘drastic measures’ need to be taken to curtail the spread of the virus in Spain.

Although the vast majority of those infected don’t show symptoms, the speed of the surge in Spain can only be compared to that of the first surge in March 2020, Horcajada said.

Most hospitalised patients don’t need much breathing support and get well enough with corticosteroids. But doctors are seeing people in their 20s and early 30s developing serious pneumonia.

In Spain, the young are largely socialising while unvaccinated because authorities have strictly prioritized the elderly and most vulnerable groups.

As a result, 21 million — or half of the country’s adult population — are fully vaccinated, but fewer than 600,000 of those are younger than 30, according to the latest Health Ministry data.

‘It is still too early to think that vaccination will be brought under control in a short space of time,’ Horcajada said, adding that most of his patients became infected before they received their second vaccine dose.

As a tourism powerhouse, Spain dropped curfews and outdoors mask requirements, among other restrictions, just in time for the summer season.

The first major outbreaks were reported soon after, even before many tourists could make it into the country.

Many have been tied to the first holiday trips, unofficial celebrations of traditional summer festivals that are getting labeled colloquially as ‘the no-parties,’ and nightlife that reopened just as schools closed.

For Horcajada, the timings were a recipe for disaster: ‘We are dealing with a variant that is capable of infecting within seconds following minimum contact with a positive person,’ he said.

But, in a departure from previous surges, before vaccines were available, new deaths are receding and hospital occupation rates growing at a fraction of the pace of new infections.

Spain’s Health Ministry, for example, reported Friday 6 confirmed fatalities nationwide, the lowest figure since last summer, compared to 352 on January 5 this year and 217 on October 19 last year, two dates when the contagion rate was at similar levels and increasing.

More than one-tenth of regular hospital beds and one-fifth of intensive care wards were treating Covid patients on then, but the current occupation rate stands at 2.4 per cent in regular beds and 6.6 per cent in ICUs.

There’s a similar pattern in other countries with the fastest-spreading outbreaks in Europe. In Portugal and Cyprus, hospitals are far from previous near-collapse scenarios, although they steadily accumulate patients.

The UK averaged almost 30,000 new reported infections a day in the past week, compared to a peak of roughly 70,000 at the height of the winter surge in January driven by the alpha variant — more contagious than the original virus but significantly less so than delta.

But daily deaths at the time surpassed 1,000 for days, while 29 were recorded on Friday.

Spain’s central and regional governments are trying to accelerate vaccination of younger groups, but are wary of sweeping measures such as nighttime curfews or travel bans that would affect tourism.

France and Germany are already discouraging travel to Spain and neighbouring Portugal, a move that has thwarted the tourism industry’s attempt to get back on its feet.

The northeastern Catalonia region, for example — where Barcelona is — only allows bars and nightclubs to operate their outdoor spaces starting this weekend, and yet authorities have allowed a music festival to go ahead with thousands of people. Concert-goers are required to test negative for antigens before joining the fun.

Ana Aguilar, a 20-year-old nurse at the Hospital del Mar, sympathised with those who want to party but said her generation needs to be more patient.

As a medical worker, she also expressed the frustration of a never-ending cycle of virus surges.

‘When everything seems to be restarting again, the virus comes back . And it’s the same thing once again,’ Aguilar said. ‘It’s very tiring, the uncertainty makes it very difficult to deal with.’