Beijing: Rescue work after China’s most recent earthquake has been hindered by the country’s slavish adherence to a COVID-19 zero strategy, sparking protests and adding another layer of stress for residents and emergency personnel in the region that has already suffered dozens of deaths.

After a 6.8-magnitude earthquake struck Monday in China’s vast southwestern region, 225 kilometres from the provincial capital of Sichuan, COVID-19 controls were put in place to control an emerging outbreak nearby that shut down a city of 21 million people. Officials are strictly enforcing the rules despite the hurdles they create for workers trying to ensure safety in the aftermath of the natural disaster that claimed 74 lives. Outside rescuers weren’t allowed entry to the epicentre to help. 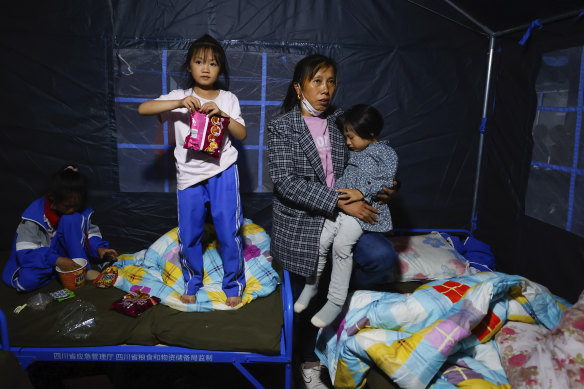 Residents shelter in temporary tents setup in the aftermath of the earthquake in southwestern China’s Sichuan Province.Credit:Xinhua via AP

The requirements are part of the zero tolerance approach to Covid espoused by President Xi Jinping, who has touted the country’s success in limiting deaths that continue to rapidly accrue in most of the world. The policy comes at an escalating cost to the economy and the people, however. There’s been no relief even during times of crisis, such as the Sichuan wildfire last month when heavily garbed workers conducted PCR tests in front of the inferno.

China’s current outbreak, fuelled by a more contagious variant that has swept through every province in recent weeks, is posing a challenge to authorities ahead of the Communist Party congress when Xi is expected to secure a precedent-breaking third term as the country’s leader. There were 1,334 infections reported for Wednesday, marking a month where cases were above 1,000 a day.

On Thursday, the Chinese city of Chengdu extended the lockdown for a majority of its more than 21 million residents to prevent further transmission while millions more in other parts of China were told to shun travel in upcoming holidays.

The lockdown began on September 1 and since last week, Chengdu has mostly reported fewer than 200 new infections a day, a tiny fraction compared with outbreaks in other parts of the world. It found 116 new cases for September 7 versus 121 the day earlier, authorities said on Thursday. 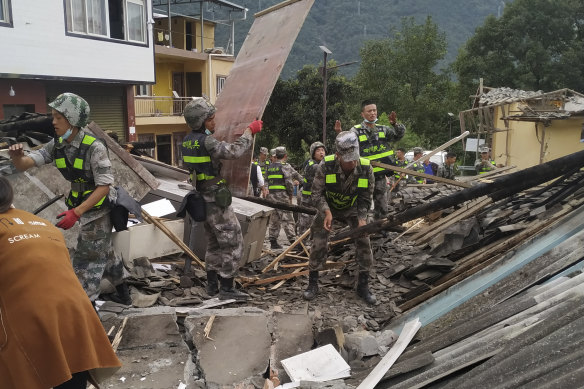 In Luding county, where the earthquake struck, rescue personnel must get COVID-19 tests on a daily basis and entering indoor venues requires multiple checks, according to a statement issued by the local virus prevention office that has since been deleted. Workers need to be approved by the local COVID control office, have a negative test result from within 24 hours and hold a green health code to enter the region. They need another PCR test to get into the controlled area, the statement said.

The earthquake came in the aftermath of a heat wave and drought which triggered a power crunch in the region.

The restrictions have aroused frustration and angst. Local authorities told residents of the quake-rattled region who are trying to stay with friends and family that they must learn and report back on the COVID-19 control requirements in the new areas in advance. They can only leave with a negative test result.

People in some neighbourhoods weren’t allowed to leave their homes, according to posts and videos circulated on Chinese social media. Restrictions were placed on the entire region. No external groups were allowed to enter to help with the rescue work at the direction of the Covid prevention department of Sichuan’s Ganzi prefecture, home to the county hit by the earthquake.

Lao Dongyan, a law professor from Tsinghua University, said on the social media platform Weibo that she couldn’t believe the COVID-19 rules for quake rescuers and victims were real. Her post was shared 22,000 times and attracted over 3,500 comments, most agreeing with her and saying the order was crazy. One said people could die from the earthquake, but they can’t get COVID-19.

The potential ramifications from the COVID-19 measures came into sharp relief as tremors from the earthquake hit in locked-down Chengdu, where people were only allowed to leave their homes at certain times. A widely circulated social media post showed the exit of a residential compound that was blocked because of COVID-19 controls, even as people were trying to escape from the building.