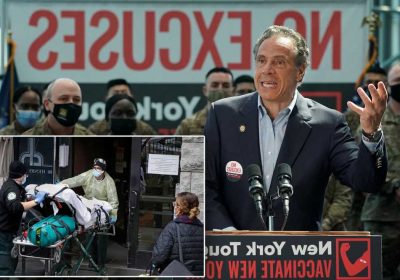 NYC woman selling her entire wedding for $15K on TikTok

The Cuomo administration was apparently aware of the true death toll in nursing homes since last spring, The New York Times reported.

But senior staffers buried a scientific paper that reported the number, blocked health officials from releasing the accurate tally and didn’t publicize an audit of the data until months after it was completed, the report alleges.

An email sent by top aide Melissa DeRosa to health officials on June 18 indicated the admin was “anxious” about a DOH report on nursing home coronavirus fatalities, the Times reported.

DeRosa apparently wanted the report to downplay the idea that the state’s controversial directive that required nursing homes to readmit infected COVID-19 patients was problematic.

They initially put the nursing home death toll at around 6,000 — though they were not counting residents who died in hospitals.

The draft report, which was obtained by the Times, put the number of residents with coronavirus killed through the end of May at 9,739 — far higher than what the admin was saying at the time.

It found that “approximately 35 percent” of all deaths in the state were among nursing home residents.

But the report was never published. Instead, a version that was reportedly rewritten by senior Cuomo aides several times was released in July, claiming that only 21 percent of all New York COVID-19 deaths were in nursing homes.

The conclusions from the state’s own health experts were buried even as Cuomo publicly urged people to “Look at the data. Follow the science. Listen to the experts” when it came to the pandemic.

During an August hearing with the NY Legislature, Dr. Howard Zucker, the state’s health commissioner, said officials were worried about “double counting” or other issues with the data.

“When the data comes in,” he testified, “then I will be happy to provide that data to you.”

After those hearings, DeRosa instructed Gareth Rhodes, a former member of the COVID-19 task force, to go over the DOH numbers. He flagged 600 additional deaths, the Times reported.

However, that audit, reportedly sent to the governor’s office in early September, didn’t see the light of day either.

That month, the justice department sought documents and data from the Cuomo administration pertaining to COVID-19 related deaths in New York-run nursing homes, as The Post exclusively reported at the time.

In October, Cuomo reportedly acknowledged in a call with DeRosa, Zucker and other health officials that the figures would have to come out eventually. But he then asked for further analysis of the data, according to the Times.

The analysis didn’t change the figures. Still, two letters drafted by DOH officials that would have shared the number of nursing home deaths with state lawmakers were never sent, the Times reported.

Within hours, Zucker added thousands to the death toll. More than 15,000 nursing home deaths have been reported.

Federal authorities are now investigating claims that the Cuomo administration intentionally undercounted or lied about the number of nursing home residents killed by the coronavirus.

The investigation was initiated after The Post exclusively revealed in February that DeRosa privately admitted to state Democratic lawmakers that his administration “froze” and withheld the total nursing home death toll from COVID-19 from them due to a then-pending probe by the Justice Department under the Trump administration.

Top Cuomo officials have since been subpoenaed for documents pertaining to the federal probe, and the governor himself hired lawyer Elkan Abramowitz to represent him in the nursing home scandal.

Abramowitz told the Times that the administration was reluctant to release numbers it did not believe were reliable.

“The whole brouhaha here is overblown to the point where there are cynical suggestions offered for the plain and simple truth that the chamber wanted only to release accurate information that they believed was totally unassailable,” he said.

“The chamber was never satisfied that the numbers that they were getting from DOH were accurate.”