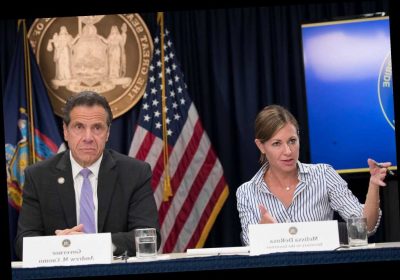 Melissa DeRosa, the highest-ranking woman on Gov. Andrew Cuomo’s executive staff, said Wednesday she is “incredibly proud” of the administration’s record on women’s issues, weighing in as the governor spoke in public for the first time on sexual harassment allegations against him.

DeRosa stood by her longtime boss as the governor again addressed inappropriate remarks he made in the workplace, as well as accusations of inappropriate touching at the wedding of an aide.

“I am incredibly proud of the work that this administration has done to further women’s rights,” said DeRosa, joining Cuomo at an Albany press briefing, his first since the scandal exploded.

DeRosa, Cuomo’s top aide, said she was proud of administration efforts “to expand protections for women in the workplace, out of the workplace, maternal health, reproductive health.”

“I’m also proud that, in my time as secretary, we’ve seen more women rise to [the] highest levels, in terms of commissioners and senior staff levels,” DeRosa continued. “I don’t think that this diminishes any of that, and I look forward to continuing the work that we’re doing in order to continue the women’s agenda and strengthen women’s rights for all New Yorkers.”

DeRosa factored prominently in the other major scandal facing the governor, admitting at a private meeting with Democratic lawmakers last month that the Cuomo administration intentionally downplayed the number of nursing home resident deaths from the coronavirus in an unsuccessful bid to avoid a federal probe.

Like her boss, DeRosa on Wednesday urged New Yorkers to wait for the results of state Attorney General Letitia James’ independent probe into the allegations.

“I would just ask that everyone refrain from judgment until the attorney general is allowed to do her work,” she said. “Everyone’s gonna fully comply with that.”

Speaking moments earlier, an “embarrassed” Cuomo apologized for making off-color remarks in the workplace, which he had previously characterized as “jokes.”

He again flatly denied allegations of inappropriate touching — and said he had no intention of stepping down.

Boylan, 36, has accused Cuomo of kissing her on the lips without warning and suggesting they play strip poker.

Bennett, 25, alleged that the governor made a series of untoward remarks and asked questions about her sex life, leaving her convinced he was in pursuit of a relationship.

A third accuser, Anna Ruch, 33, has alleged that Cuomo grabbed her at a 2019 wedding and kissed her on the cheek as she tried to pull away.