Could the true coronavirus death toll be much higher? CDC data reveals there have been 200,700 excess deaths during the pandemic – 54,000 more than the 161,000 confirmed COVID fatalities

Data from the Center for Disease Control and Prevention has revealed there has been 200,700 excess deaths during the pandemic – surpassing the confirmed 162,000 COVID-19 death toll.

In August, the United States continued to amass the largest COVID-19 death toll across the world and the number topped 162,000 this week.

But according to a New York Times analysis of CDC data, there have actually been 200,700 excess deaths in the country between March 15 to July 25. 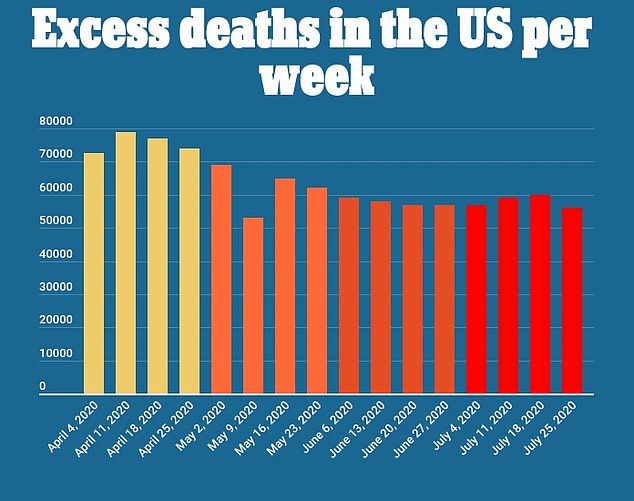 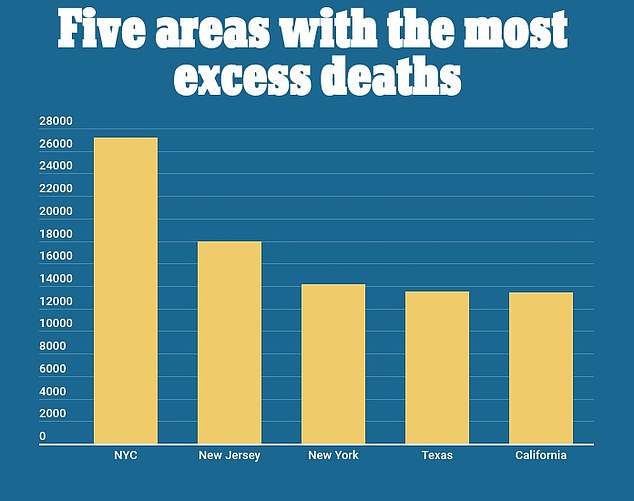 Based on CDC data analyzed by The New York Times, places like New York City, New Jersey and New York state (excluding NYC) were among the top five places that recorded above normal levels of deaths during the pandemic

The NYT analysis went beyond just COVID-19-related deaths and included deaths from all causes during that period, per CDC reporting.

This allows for a window into the United State’s death toll that isn’t dependent on the availability of COVID-19 tests in states or the accuracy of reporting in different regions.

The CDC noted that some deaths related to COVID-19 may accidentally be counted under another category.

‘As some deaths due to COVID-19 may be assigned to other causes of deaths (for example, if COVID-19 was not diagnosed or not mentioned on the death certificate), tracking all-cause mortality can provide information about whether an excess number of deaths is observed, even when COVID-19 mortality may be undercounted,’ the agency wrote.

The process of counting COVID-19 deaths, and deaths in general during the pandemic, is also marred by several states and the CDC having a lag in reporting.

The CDC’s estimates are adjusted based on how mortality data has lagged in the past.

But the numbers are clear, more Americans died from March 15 to July 25 this year than in previous years and the official COVID-19 death toll contributed to a large chunk of that.

This is at odds with the Trump administration’s insistence that COVID-19 death toll numbers are greatly exaggerated and a number of conservatives have adopted the conspiracy that the numbers were inflated for political gain. 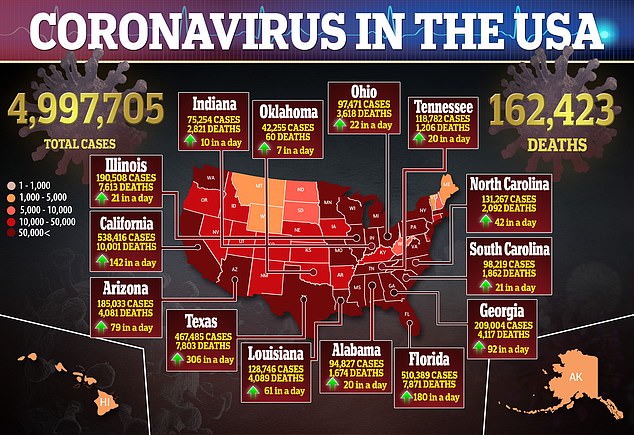 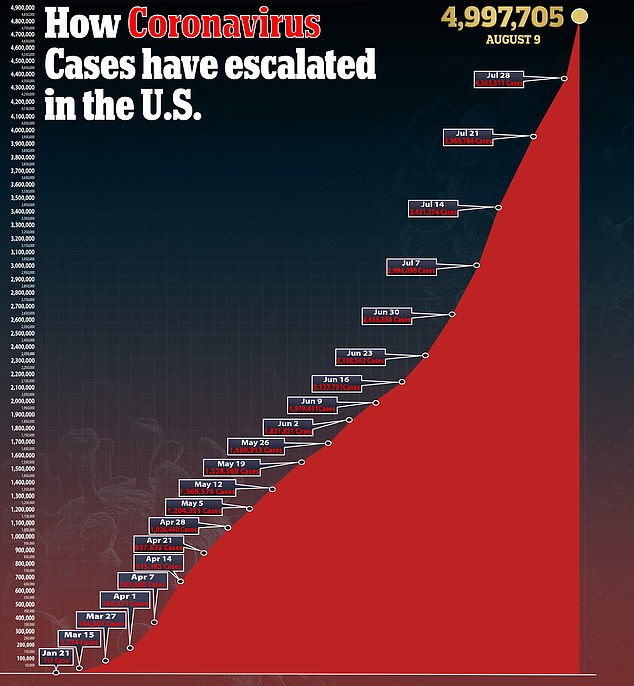 Above average death rates have become common in a number of states, including New Jersey and New York.

The data from the NYT shows that New York City, the country’s original pandemic epicenter, has experienced the most significant increase of excess deaths at 27,000 – 143 percent higher than normal.

Similarly, the analysis determined that several states with deaths at least 10 percent above average level had increased.

New Jersey recorded an estimated 18,000 excess deaths during that four month period, while New York State had 14,200 such deaths.

There are currently more than 161,000 deaths in the U.S. from coronavirus and almost 5 million confirmed cases. 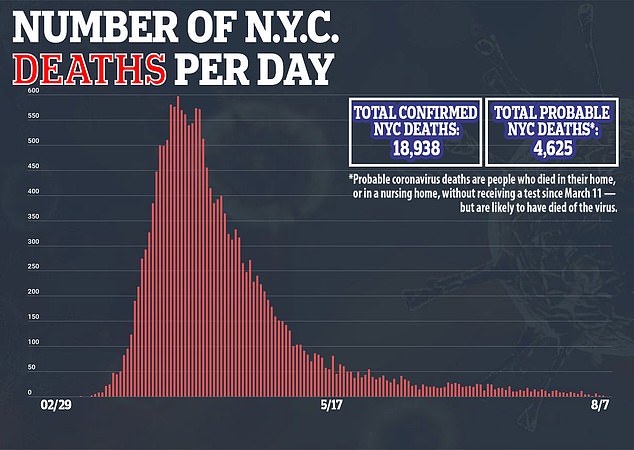 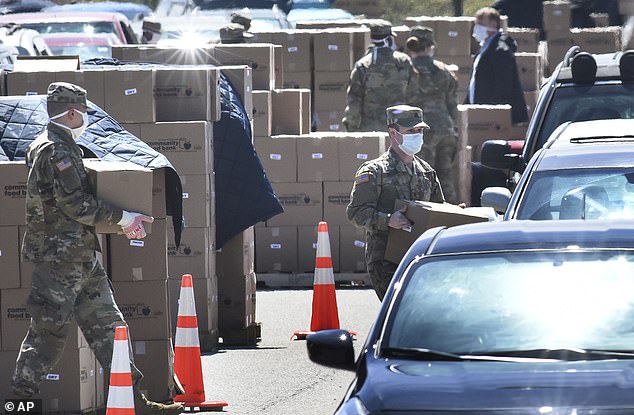 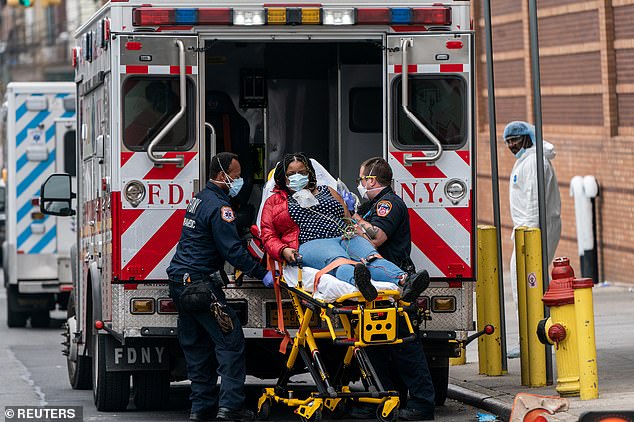 New York state, and specifically New York City, topped the analysis’ data for having the highest number of excessive deaths during the pandemic so far. Pictured: Healthcare workers wheel a person outside Wyckoff Heights Medical Center during the outbreak of the coronavirus disease on April 5 – the height of the pandemic in the city 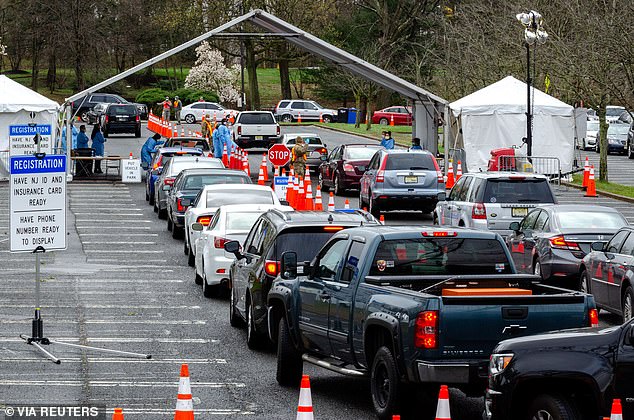