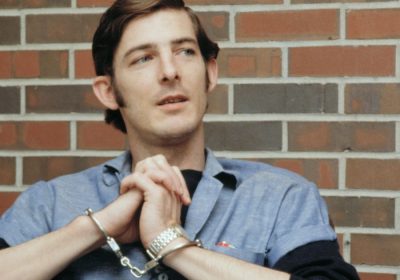 A convicted killer suffered one of the most gruelling botched executions in history when he was slowly zapped to death over 14 minutes.

John Louis Evans III was convicted of Capital Murder after admitting to going on a two-month-long crime spree from December 1976 to January 1977.

He was the first killer to die by electric chair in Alabama after the punishment was reinstated.

But despite his confession, prosecutors allegedly rejected his guilty plea in a bid to get Evans executed – which was only allowed through a conviction from a jury.

Evans was tried in State Circuit Court on April 26, 1977, where he admitted to the charge of first-degree murder.

He claimed he did not feel remorse and that under the same circumstances he would kill again and threatened to murder each member of the jury if they did not sentence him to death.

After 15 minutes of deliberation, the jury reached a guilty verdict and the death penalty was confirmed by the Alabama Court of Criminal Appeals and by the Alabama Supreme Court.

The 33-year-old killer tried to appeal his sentence twice, before he was eventually sent to die on the State's notorious 'Yellow Mama' electric chair in April 1983.

But the current – which should have been deadly almost immediately – took far longer to kill him than expected.

Russell F. Canan described the execution in his book Burning at the Wire: The Execution of John Evan, writing: "At 8:30 p.m. the first jolt of 1900 volts of electricity passed through Mr. Evans's body.

"His body slammed against the straps holding him in the electric chair and his fist clenched permanently.

"The electrode apparently burst from the strap holding it in place. A large puff of greyish smoke and sparks poured out from under the hood that covered Mr. Evans's face.

"An overpowering stench of burnt flesh and clothing began pervading the witness room. Two doctors examined Mr. Evans and declared that he was not dead.

"The electrode on the left leg was refastened. At 8:30 p.m. Mr. Evans was administered a second thirty-second jolt of electricity. The stench of burning flesh was nauseating.

"More smoke emanated from his leg and head. Again, the doctors examined Mr. Evans. The doctors reported that his heart was still beating, and that he was still alive.

"At that time, I asked the prison commissioner, who was communicating on an open telephone line to Governor George Wallace to grant clemency on the grounds that Mr. Evans was being subjected to cruel and unusual punishment. The request for clemency was denied.

"At 8:40 p.m., a third charge of electricity, thirty seconds in duration, was passed through Mr. Evans's body.

"At 8:44, the doctors pronounced him dead. The execution of John Evans took fourteen minutes."