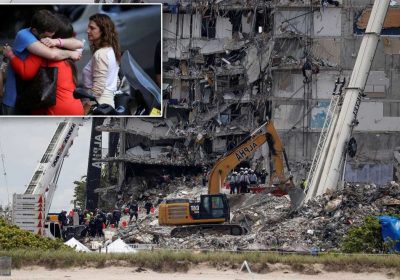 Emergency workers recovered an 11th body from the rubble of the collapsed Florida condo as the search for survivors continued late Monday, authorities said.

There were still 150 people unaccounted for as the fifth day of searching was coming to an end, Miami-Dade County Mayor Daniella Levine Cava said at a news briefing.

“We have people waiting, waiting and waiting for news – that is excruciating,” Cava said.

Part of the Champlain Tower South Condo collapsed Thursday, leaving 12-stories worth mounds of debris for emergency crews to dig through to recover the remains of the dead – and survivors who might be trapped under piles of mangled stone and steel.

The around-the-clock rescue operation includes dogs, sonar, cameras, heavy equipment and workers from as far as Israel. Miami-Dade has created a larger family assistance center as the death toll increases and families of the missing converge on Surfside and await the latest on their loved ones.