Singapore: There have been three flights from Dili to Oecusse in the past month as well as one ferry trip.

By air and sea, a judge, two sets of lawyers and a prosecutor have made their way from the East Timorese capital to the coastal enclave that borders Indonesia. They have assembled in Oecusse for a criminal trial that has divided a nation. 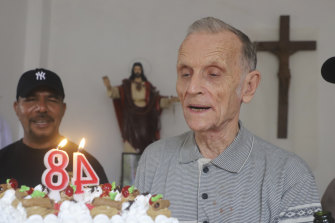 Now-defrocked Catholic priest Richard Daschbach, centre, is presented a cake during his 84th birthday in Dili in January. Credit:AP

The problem is the defendant – once revered American missionary and Catholic priest Richard Daschbach – hasn’t shown up.

The 84-year-old is under house arrest in Dili accused of the systematic sexual abuse of girls under the age of 14 during the more than two decades he ran a shelter in the mountains near the remote village of Kutete for orphans, children of the impoverished and highlands women escaping from violence.

But his alleged victims, some of whom have also returned to Oecusse, have for a third time in three months been forced to wait for his closed-court trial to resume. Now the surging COVID-19 outbreak in the country is the latest reason given for his absence.

Julio Nunes, the court clerk in Oecusse, said he had been notified that Daschbach had been unable to find a way to travel to court this week. Daschbach’s lawyers had since indicated he intended to arrive two days before the trial’s next scheduled resumption, Nunes said.

“Dili is still in lockdown. He couldn’t find a ship or [a plane]. I just received messages from his lawyer that they will be coming on June 5,” he said.

Maria Agnes Bere, whose law firm JU,S Jurídico Social represents 15 of his alleged victims, said she indisputably trusted the courts to be impartial in the case but nearly 20 years after East Timor’s independence they needed to show they had “become a robust institution capable of delivering justice”.

“The accused is making a mockery of the justice system in Timor-Leste, and the sad fact is that the courts are allowing it to happen, and the prosecutor seems not ready to face this unethical game,” she told The Sydney Morning Herald and The Age from Oecusse.

“We discovered that the accused did not even try to come to Oecusse. Despite that, the court simply accepted the excuse of the accused that he couldn’t come because of COVID-19.”

The trial before a three-judge panel has now been postponed until the week of June 7.

The case is deeply emotional in the country that is 98 per cent Catholic. A God-like figure who was also heralded for his role in organising resistance to pro-Indonesia militia in the conflict of 1999, he was defrocked by the Vatican after its own investigation in 2018. But Daschbach has retained support including from influential former president Xanana Gusmao, who was pictured first bumping with the ex-priest outside the court in February, as well as celebrating the birthday of the accused with cake and wine at his home in January. 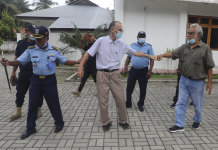 The Herald and The Age also called and messaged Daschbach’s lead counsel, Pedro Aparicio, but did not hear back.

The testimony of alleged victims is harrowing. They have told of how he would attach a list of the girls’ names on his door to designate who would be spending the night with him and how they were subjected to molestation, performing oral sex and rape.

Tony Hamilton and Jan McColl, two Australian former donors to Daschbach’s Tohu Honis shelter who are involved in trying to bring him to justice, have previously told reporters how the disgraced priest admitted abusing girls when they confronted him in Dili in 2018.

When asked about the accusations against him a year later by the Tempo Timor news outlet, Daschbach replied: “That’s my business, not yours”.

The Associated Press reported in April it had seen documents suggesting his legal team would claim he was the victim of a conspiracy.

Aside from delays to the trial, the lawyers for the alleged victims have expressed frustration that the court has not dealt with an apparent breach by Daschbach of the terms of his detention order by greeting children who approached him after he left a previous court appearance in Oecusse.

Bere said the continued delays with the trial were having a “devastating” impact on those who had spoken up, shaking their confidence in the system and leaving them at times even questioning their existence.

“We see it in their eyes,” she said. “We realise now that besides having abused and raped them, the accused, with the support of his legal team, is now tormenting them psychologically.”

What in the World

A note direct from our foreign correspondents about what’s making headlines around the world. Sign up for our weekly newsletter here.