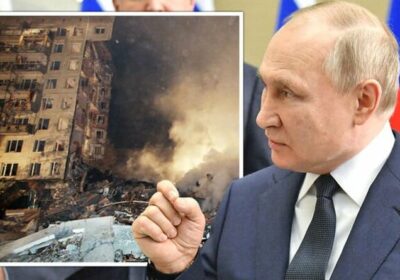 Major-General Kyrylo Budanov, head of the Defence Intelligence of the Ministry of Defence of Ukraine has warned that Russia is planning terrorist attacks on its own territory. The aim would be to influence Russian civilians against Ukraine by blaming the defending country for the attacks and “fuel anti-Ukrainian hysteria”.

The Ukrainian MoD representative appeared to have detailed information on how and where the attacks from the Russian special services will strike.

He noted that Putin’s regime will be targeting residential buildings, hospitals, and schools for the prospective attacks.

Speaking to the press on Tuesday, Mr Budanov said: “Russian special services are planning a series of terrorist attacks with mining and blowing up residential buildings, hospitals and schools in Russian settlements.”

He added that the intention of the attacks will be similar to the launch of missiles and bomb strikes on the city of Belgorod.

Belgorod, a city in Russian territory about 20 miles north of the border with Ukraine, was struck on April 1 and 3, without casualties, with the Russian authorities accusing Ukraine.

Russia’s defence ministry first said that an attack at a fuel depot in the city was launched by two Ukrainian helicopters.

The Kremlin then said the incident could undermine peace efforts, however, Ukraine’s security officials denied responsibility for the attack.

The Ukrainian intelligence agency claimed that further attacks on Russian territory will come due to the realisation that Putin’s war is failing.

The agency said: “He (Mr Budanov) is convinced that the failed implementation of the mobilization plan in Russia is forcing the Putin regime to put in place dirty scenarios to emotionally stir up Russian society and consolidate it even more against Ukrainians.”

A statement continued: “To do this, they are planning explosions in Russian homes or rocket fire to accuse the Armed Forces of Ukraine and volunteer battalions of this, to create an emotional picture of the ‘atrocities of Ukrainian nationalists’.”

They added that these upcoming terrorist attacks will be presented as revenge for Ukrainians for Bucha and Kramatorsk.

According to the Ukrainian intelligence agency, the projected attacks will also act as a justification for the cruelty against the Ukrainian civilian population and the numerous alleged war crimes committed so far by the Russian troops.

Mr Budanov added: “In recent days, the Russian government has been increasingly dispersing the flywheel of anti-Ukrainian hysteria.

“Trenches are being actively dug in Belgorod and Kursk oblasts, and panic is flaring up over the imaginary offensive of Ukrainian volunteer battalions and sabotage groups.”

Finally, he cited how “symbolic” it is that Putin’s regime began with his forces launching terrorist attacks on Russian civilian apartment buildings during the Chechnyan war in 1999.

Mr Budanov concluded: “And now, Putin’s rule seems to be ending with the same methods.”