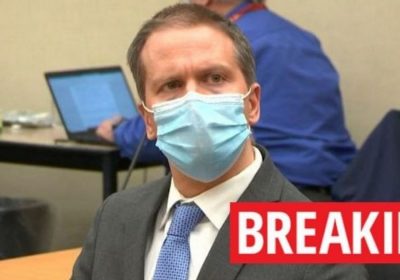 A Minnesota judge has sentenced Derek Chauvin to 22 and a half years in prison for the murder of George Floyd.

Massive protests against racial injustice occurred when Chauvin, who is white, was seen by millions pressing his knee onto the neck of Mr Floyd, who was black, for nine minutes and 29 seconds.

Mr Floyd was stopped by police in Minneapolis in Minnesota, US, on suspicion of using a fake $20 bill to pay for cigarettes at a convenience store.

Bystanders watched on as officers pinned Mr Floyd to the ground, with veteran cop Derek Chauvin kneeling across his neck.

After several minutes of complaining that he couldn't breathe and calling for his mother, Mr Floyd stopped responding, with onlookers pointing out to officers that he had stopped speaking.

At one point, officers threatened those onlookers with mace and one witness was pushed away after trying to intervene.

Mr Floyd was eventually taken to hospital and pronounced dead in the emergency room.

His death sparked Black Lives Matter protests around the world, with millions demonstrating against police brutality and racism.

As the trial began on March 29 this year, Mr Floyd's family, civil rights lawyers and activists knelt outside the heavily fortified Minneapolis courthouse for the length of time that Chauvin kept his knee on Mr Floyd's neck.

In closing arguments before the jury began its deliberations on Monday, a prosecutor told jurors that Chauvin "had to know" he was squeezing the life out of Mr Floyd as he cried over and over that he could not breathe and finally fell silent.

Chauvin, 44, has been in jail since being charged with murder back in April.