Diabetic girl, 15, collapsed at school and died just hours after doctors misdiagnosed her with an ear infection, inquest hears

A diabetic teenager who died just hours after being misdiagnosed by her GP may not have survived even if she had been taken straight to hospital, according to a paediatrician.

Rosie Umney, who had type 1 diabetes, fell seriously ill while at Herne Bay High School, in Kent and taken to a GP surgery by her mother Georgina because she was vomiting, hyperventilating and struggling to walk.

The 15-year-old was wrongly told by Dr Sadaf Mangi with an ear infection and less than 10 hours after the incorrect diagnosis, Rosie died from ketoacidosis.

Dr Mangi admitted at a previous inquest hearing that she ‘deeply regrets’ the fact she ‘fell short’ of her responsibilities as a GP, and said at the time: ‘I whole-heartedly apologise.’ 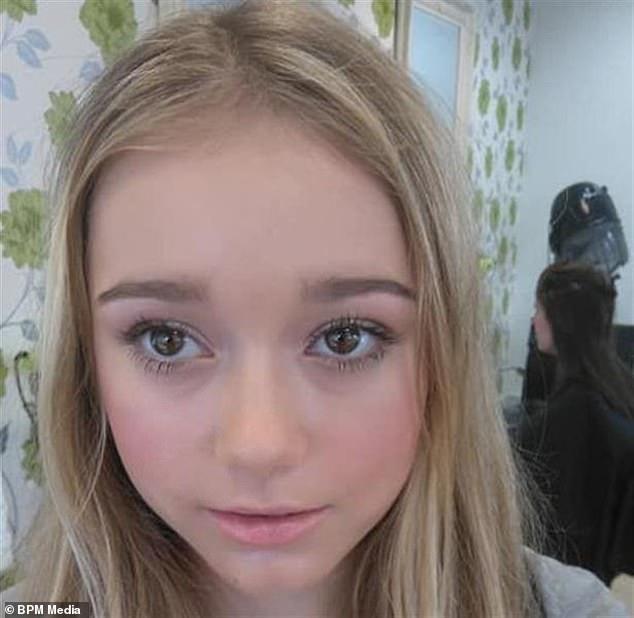 An inquest into the death of 15-year-old Rosie Umney (pictured), who had type 1 diabetes, has heard the school girl may not have even survived even if she had been taken straight to a hospital immediately by her GP. Rosie died in July 2018 from ketoacidosis

But an inquest into Rosie’s death, which was reopened at Canterbury Coroners’ Court on Wednesday, heard how the teen may not have lived even if she had been referred to hospital immediately by Dr Mangi.

Abigail Price, a consultant paediatrician who is based at the Queen Elizabeth The Queen Mother Hospital in Margate, said at the inquest: ‘Had Rosie gone to hospital at that point, could her life have been saved? It’s a possibility.

‘There is also possibility the outcome could have been the same. We can’t know. I do not think anyone would be able to know. I cannot say whether we would have been able to save her life.’

When asked to describe the treatment normally issued to a patient who has gone into diabetic ketoacidosis, which Rosie had, Dr Price explained the process and again reiterated she couldn’t say whether Rosie could have been saved.

‘The treatment depends on the condition of the patient,’ she said. ‘There is a paediatric emergency protocol. We would usually follow guidelines.

‘It would be implemented fairly quickly upon arrival. She would have received treatment. Whether it would have saved her life or not, I cannot say.

‘And what I can’t answer is how successful that treatment would have been. Is there a chance of the outcome being different? I cannot say she would or would not have survived.’ 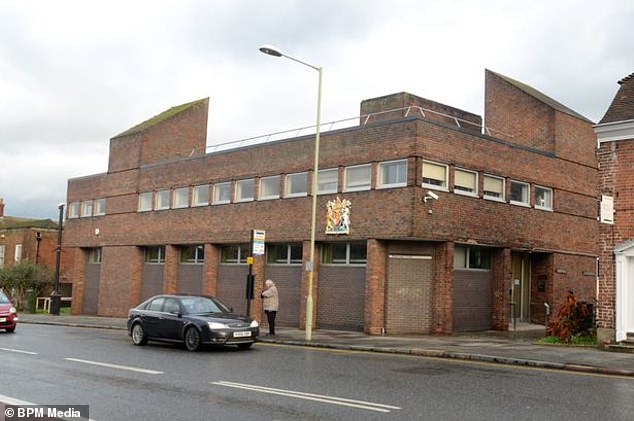 Abigail Price, a consultant paediatrician who is based at the QEQM Hospital, cited the risk would have been that Rosie could have suffered cerebral edema, a build up of fluid in the brain, which is also fatal

Dr Price also cited the risk there would have been that Rosie could have suffered with cerebral edema, a build up of fluid in the brain, as a result of treatment, which is also potentially fatal.

Christopher Gillespie, representing Dr Price, said: ‘One cannot say whether or not Rosie would have survived had she been submitted to hospital earlier.

‘Dr Price could not be sure. One can see the argument for saying, of course, it would have been better for Rosie to be sent to hospital earlier.

‘Would it have given her a better chance of survival? Dr Price simply cannot say. Her conclusion is that she is unable to say one way or the other.’

After falling ill at school, Rosie was collected by her grandfather Michael Umney as her parents were at work at the time.

Her mother Georgina Umney returned to their Herne Bay home a short while later and Rosie had said she was feeling slightly better.

However, Rosie’s condition then began to deteriorate and they booked an emergency appointment with a GP at the William Street Surgery at around 5.30pm.

Once there, another woman who was waiting, seeing the condition Rosie was in, suggested the teenager see the doctor before her.

Rosie was examined by Dr Mangi and Rosie’s mother and grandfather told the GP they had taken her blood glucose reading on her machine and it said the results were normal.

In July 2018, Rosie fell ill while at Herne Bay High School (pictured) and was collected by her grandfather Michael Umney 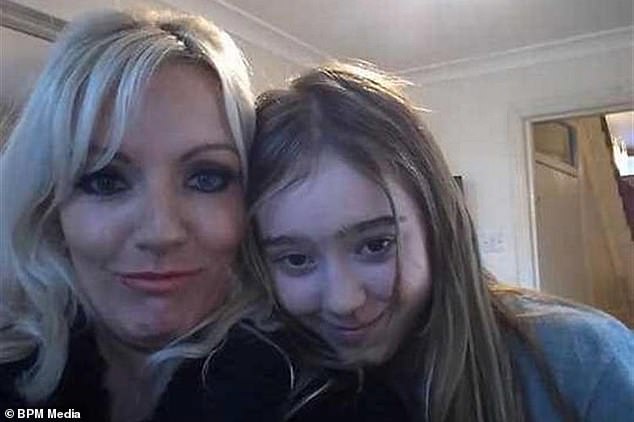 Later Rosie’s mother Georgina Umney (left) took her to see Dr Mangi at the William Street Surgery. Dr Mangi diagnosed the teen with an ear infection and prescribed her with antibiotics

After examining her and finding she had a heart rate of 140 beats per minute, Dr Mangi diagnosed Rosie with an ear infection and gave her a prescription for antibiotics.

The family returned back home along with Rosie’s father Lee Hubble and as it was a very hot night, Georgina and her daughter slept on sofas in the lounge.

Georgina explained that she regularly checked Rosie’s blood glucose levels throughout the evening and they were normal.

In the early hours of July 3, Georgina tried to wake her daughter but was unable to do so and immediately called for an ambulance.

Her dad Lee also came to the living room and began performing CPR before paramedics arrived at around 1.10am and took over.

One of the paramedics twice tested Rosie’s blood glucose levels on his machine and found a reading of ‘high’, indicating it was more than 30 mmol/L.

Rosie was rushed to the QEQM Hospital but sadly died.

Dr Mangi admitted at a previous hearing that she did not know the advised procedure in terms of warning signs and action to take in the case of children who may be suffering from type 1 diabetes.

These guidelines highlight a number of symptoms, including vomiting, shortness of breath and temperature, which if found in a diabetic child, should lead to them immediately being taken to hospital. 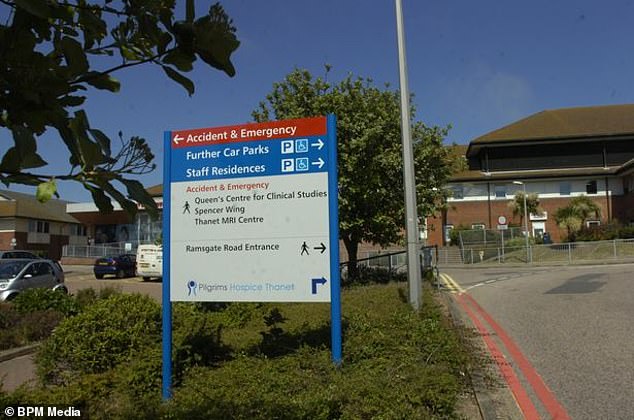 Rosie was rushed to the QEQM Hospital in Margate (pictured) but sadly died. A post-mortem found that Rosie died of diabetic ketoacidosis, a condition caused by consistently high blood sugar levels

She said that while diabetic ketoacidosis had been her initial thought, she discarded this idea completely when Mrs Umney said Rosie’s blood glucose readings were normal and attributed her symptoms to the infections, and her increased heart rate to her sense of anxiety, itself drawn from the infection.

When previously asked by the family’s representative, Rory Badenoch, Dr Mangi accepted that she should have been aware of these guidelines.

Issues have also been raised over Rosie blood monitoring machine, which appeared to have been giving false readings prior to her death.

Readings taken by Georgina read between 7.8 and 8.6 on the night before Rosie fell unconscious.

But when paramedics arrived a short while later, readings taken on two different machines were ‘high’, which means more than 30, while Rosie’s machine still returned a normal blood glucose level.

Assistant coroner James Dillon explained that given the case and legal submissions, it would be wrong to form an ‘off the cuff’ conclusion to the inquest.

He said: ‘These are very challenging, technical issues we are dealing with. If one was to suggest to me natural causes, that would not be appropriate.

‘What I am considering is whether negligence forms part of the findings. It’s a decision I need to take time to consider.’

Mr Dillon will issue a written conclusion within the next week.